Bears play a role in the shaping of Bern and the historic bear pits are the pride of the Swiss capital. In addition, animals are kept in Schanzengräben and Engehalde for over 100 years. Thanks to a donation by William Gabus in 1901, a new animal park could be built "if possible in Dählhölzli" as noted in Gabus' will. Construction starts February 1936, and the opening is celebrated 5 June 1937 on which occasion the bear pits are assigned to the animal park.
Architect: Emil Hostettler

Early on, it is decided not to exhibit exotic predators and to focus on native animals. Later this became European or endangered species. This in itself makes Bern animal park different from other capital zoos.

Modernist architect Hostettler has to deal with some constraints, though. His design has to be discrete. The area is one of unspoilt beauty, located between the Aare river and Dählhölzli forest, and special care had to be taken not to affect the footpath along the Aare to Elfenau. He also has to balance the construction work while the zoo is already open for business. And, despite its scenic beauty, the area is a dark forest so land clearing around Vivarium, pond, and children's zoo has to be on his radar.

Hostettler reuses the existing infrastructure of the Elfenau estate. The grounds are divided into three zones: river and marsh area, the eastern slope of the Aare and the upper forest area. In Hostettlers design, groups of animals can roam free almost like in the wild.

Vivarium
Featuring aquarium, terrarium, insectarium, and aviaries, the Vivarium is made of concrete and stone. Copper sheets and a wooden framework serve as roofing material. Outside, the protruding aquarium protects the aviaries against the west wind. The outdoor aviaries got single-frames of stainless steel wire four times thinner than ever used before on bird cages. Inside, the L-shaped Vivarium has no structural columns or walls allowing much freedom in arranging the exhibits. The Oekononomiegebäude supplies district heating and bad odours in visitor spaces are suppressed. Hostettler prefers indirect illumination from above and semi-darkness in visitor spaces. He tackles glass reflexion by placing opposite glazed displays on elevated surfaces and the use of slanted windows.

Extension and reconstruction Vivarium
Architect Andreas Furrers concept is realized 1984-1986 including a visitor path through a "coherent subtropical landscape", view of the outdoor enclosures, the landscape hall glass roof, crocodile and other displays, the entrance to the paid restricted area, and a separating closed wall between Vivarium and outdoors.

The following renovation takes place in 2012-2013: partial renewal of the glass roof and integration of the aquarium in line with contemporary requirements for large basins.

Bear Pit and Bear Park
These enclosures are disconnected parts of Dählhölzli Animal Park at the edge of Bern's Old Town, declared as a UNESCO World Heritage Site in 1983.

In 1990-1996, architect Furrer-Partner and sculptor Gunter Frentzel revamp the bear pit (1857). A sculpture of sandstone blocks and other revisions allow the bears to climb, swim, and sleep bearly, but there is little room left for walking. In 2009, on the 22nd of October, the 6000 m2 Bear Park is opened. The new space alongside the Aare is connected through a tunnel to the original bear pit. The bears have both spaces at their disposal to hang around, go for a plunge in the pool by the river, or hide from spectators. Due to a spiffy elevator, the site is disabled-friendly.

Bear Forest House at the animal park
First, you see a macadamized square. Architekturbüro Patrick Thurston's  design aims to capture the very essence of the forest where bears live. It is about the feel of wood and stone, varying heights, changing directions, light and shadow, sounds and silence. This visitor centre offers two slender entranceways leading to high glass panes to view the bears or wolves. Furthermore, caves and niches providing information, sound and movie. The Bear Forest House is linked to the former penguin enclosure now serving as a biofilter. Left of the forest house the former bear castle.

Persian leopard enclosure (2006)
The 600-m2 Persian leopard enclosure in Dählhölzi imitates the rocky landscape of the natural habitat. The concrete wall at the rear transitions left and right into the roof of the glazed viewing window in the front. The fine wire rope net, making it look like an aviary, is carried by five oak logs from the Dählhölzli forest. Depending on the light, the net appears like fog or a spider's web or you might see the mountains in its curved contours.
Architect: Graber Pulver Architects

Nordic enclosure (2008-2009)
This accommodation for musk oxen and other Northern Europeans is also designed by Architekturbüro Patrick Thurston. The irregularly hexagonal shape of the puffin's hall is inspired by a crystal and covered by a large roof without adding pillars.

Zoologist Heini Hediger, director from 1938-1943 becomes known as the father of zoo biology. He gives design and structure (quality) of the enclosures priority over square meters (quantity) and would have introduced information panels in the zoo. Des Berners Zoo (zoo for the Bern residents) is the slogan of Hannes Sägesser, director from 1970 to 1991. In 1988, Dählhölzli Animal Park has replaced almost all exotic animals by European species, except in the Vivarium. Since 2004, the motto for the zoo is "More space for fewer animals".

The animal park is also affected by the Flood of the Century (1999), especially the pond systems at the Aare, the children's zoo and the restaurant. In 2008, the Tierpark expands for the first time since 1937, in favour of the Wisent Park and the quarantine station. Around 80% of the projects mentioned in the overall planning were finalised in 2000-2015. The municipal council has approved a revised overall planning, in 2010.

Winter storm Burglind has brought down 25 beech trees, but today the zoo is open. Piles of cut down trees along the forest path leading to the freely accessible part, about half of the site. On the right, the aviaries of the Vivarium and on the left a flamingo lake (1999). Comprehensive information panels. Ticket sale in the Vivarium. The Vivarium itself is a nice sequence of small warm worlds with striking free standing office glass display cabinets on elevations of stone under hanging lamps. Outdoors a seal exhibit (2005) semi-surrounding the Vivarium and another sequence now of wildlife parks with lynxes, bears... beyond. You can already see it on the map. Except for the Bear Forest House, hygienic grey concrete, glass, and steel dominate the image of the naturalistic enclosures between Vivarium and wildlife parks. Maybe it is just because it is winter, stormy weather, and the bears have set the clock alarm for spring. I'll come back once in the summertime. In 40 minutes you walk from the animal park to the Bear Park with pixel-perfect panoramas as a reward. The Aare, that river thing is pretty cool, man. 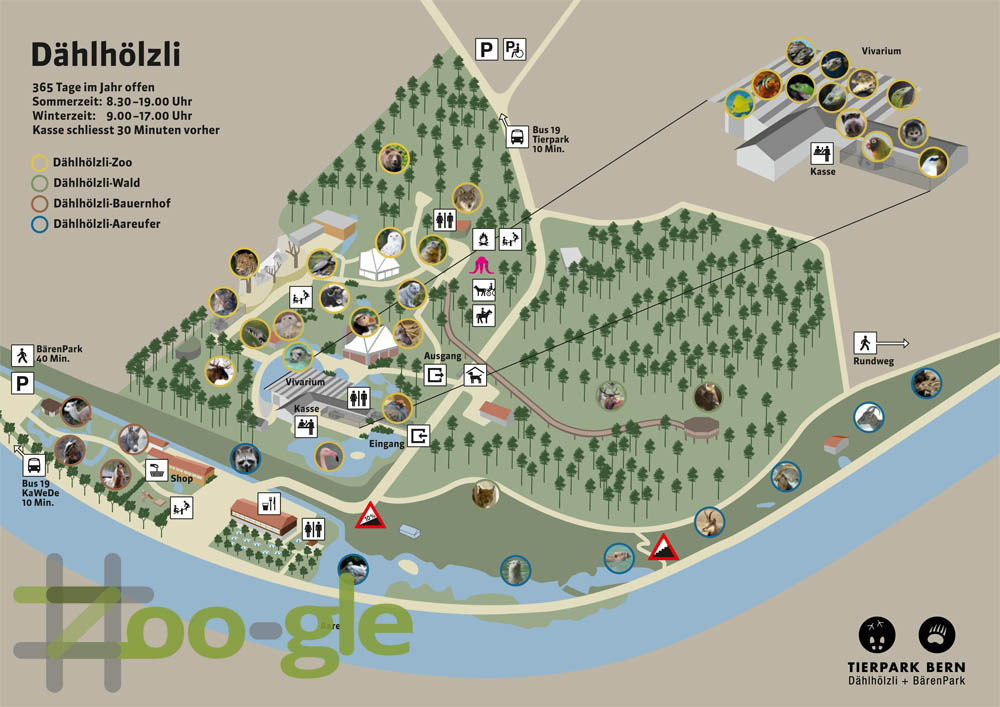