"Der Zolli" for those in the know, is now virtually surrounded by the city of Basel. A true 19th-century city zoo. It is the first and for 50 years the only zoo in Switzerland. Der Zolli dreams of becoming Basel by the Sea after the opening of the prestigious Ozeanium.

Antelope House 1910
In terms of old architecture and design, it is worth mentioning the Antelope House (1910) which is the oldest building still standing and in use. Educated at the Ecole des Beaux-Arts in Paris, the architect gets specialized in Neo-Baroque. No wonder that this gem of zoo architecture is a little like a Van Ravesteyn at the Rotterdam Zoo.

Hagenbeck and Eggenschwyler style
In the early 20th century when animal trader Carl Hagenbeck opened his famous Hamburg zoo featuring a new form of animal exhibition Basel adopted his idea. The enclosures became nature-like landscapes with trees and fake rocks. And no more fences obstructing the sight lines. The renowned Swiss sculptor Urs Eggenschwyler who had previously built artificial rock formations for Carl Hagenbeck created a Marmot Basin (1921) as well as the Sea Lion enclosure in 1922 in Basel.

Birdhouse 1927
Nowadays, this stylish greenhouse has a tropical middle area where birds are allowed to fly loose. You will find more birds in the row of aviaries on the outside. The Birdhouse is rich in beautiful details.

Sauter Garten
A tunnel (1834) under the railway line connects the Sauter Garten to the zoo. The Capricorn rock (1938) is still standing now inhabited by monkeys and snow leopards. The raptor aviary (1952-53) is fronted with almost invisible vertical piano wire like once used in Berlin. The Rhinoceros House (1959) in the Sauter Garten features a ground floor for rhinos and an upper floor for pygmy hippos. The building reflects the size of the pachyderms. The more people subjectively perceive the animals feel at home the more joy they will experience for themselves. Meanwhile, the enclosure has undergone many a revamp.

Vivarium (1972) or Wirwarium?
The winding corridor shaped like a spatial 8 on two floors and the long delivery time give the Vivarium the nickname Wirwar-ium.

Oceaneum will make Basel by the Sea come true
Basel by the Sea, that is what Basel Zoo wants. In 2012, Seacliff is the name of the winning design. The 80 Mio CHF project will be financed entirely from a donation and the construction is planned 2013 to 2019.

By locating technology and the exhibition space largely underground the above ground part is less bulky fitting well with its surrounding urban context. The Aquarium will present itself as a monolith its solid facade revealing just enough of what is going on inside to arouse the curiosity of the zoogoers. Oceaneum will hold 30 aquariums with each aquarium designed with an own spatial geometry. The sequence of 30 will eventually give an impression of ocean life. In the customer journey, part of the path seems to go straight through a rock in the breakers. The composition of a concrete mix (trass-limestone mixture) determines the extent to which the walls will let light through. The higher you go "above sea level", the more light.

May 2019, Basel votes against the Oceaneum in a referendum.

The establishment of the Ornithological Society of Basel 1870 also announced the birth of the Zoologischer Garten Basel which opened 11 acres in size on 3 July 1874. A small predator house, a blockhouse for wild boars, a goat rock, aviaries and an owl castle, and a bear pit built into a hillside so visitors could look in from the front and from above were among the first structures.

Constructive extensions to the zoo were made in the years 1884, 1924, 1934, and 1959. In 1890 and 1891 lion cages have been added to the predator house and in 1891, a Moorish-style Elephant House with a dome was added. The Festmatte was part of the first expansion (1884), where animal shows and even human shows were given the floor. The most important extension is the addition of the Sauter Garten (1934) enabled by the legacy of Ulrich Sauter.

As a small neutral state, Switzerland was spared the ravages of World War I but the economic crisis also affected the zoo facing a shortage of employees.

Former director of the Bern Zoo and well-known zoo biologist Heini Hediger was in charge of the Basel Zoo 1944-1953. When he left, he had transformed it into a scientific zoo.

From the Binningerstrasse, you see a railway, a graffiti wall, then a green strip (the zoo) and behind it the city. The zoo is elongated and narrow. Work in progress at the penguin abode and the Vivarium (exciting enclosure!) behind entrance Dorenbach. The Vivarium will serve as a laboratory for testing aquarium techniques for the Oceaneum.

Follow the long path past farm animals, polar wolves, and reindeer towards the old zoo. The Antelope House has a good Van Ravesteyn feel inside as well as outside.

Etosha covers the animal life from small (never seen so many grasshoppers in a zoo before) to large, African elephants. Namibia was a German colony and I have the idea all African zoo-phants in Western Europe come from there. Beautiful visual information on the wall of the Elephant House. The elephant outdoor enclosure Tembea is of modern architecture. The zoo does not mask anything here: the Baobab trees are concrete and functional. A timer controls that the feeding stations are accessible at variable times.

Oceaneum is located at Heuwaage between the zoo and the Kunstmuseum. Took a picture at the crime scene. Ain't it fun a landlocked country creating an ocean? 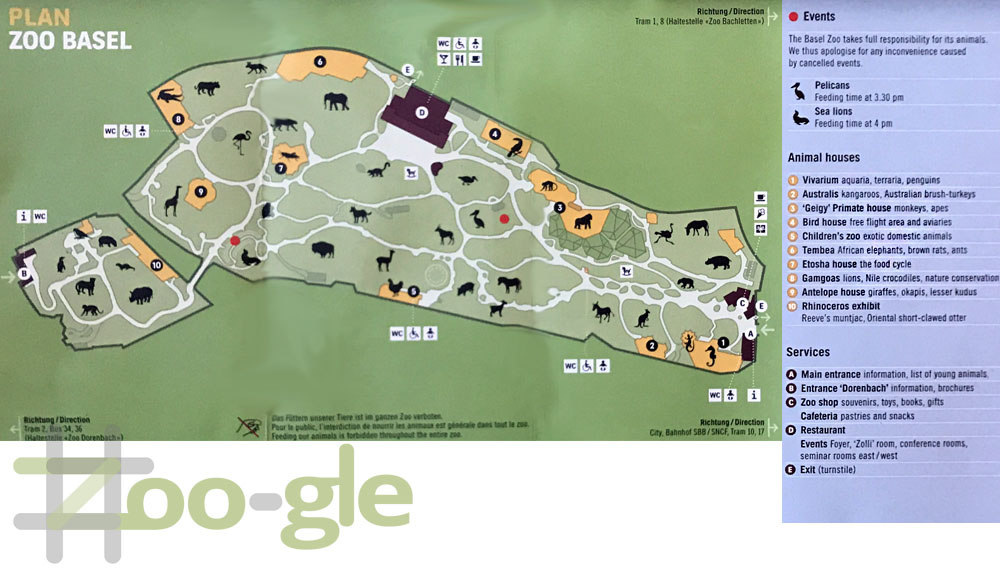 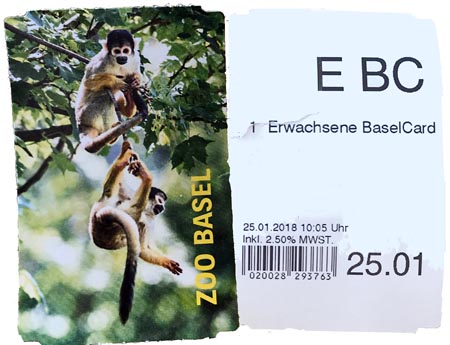