As perfectly as Zagreb is located between Budapest, Vienna and Venice, its zoo is shining on the edge of the romantically landscaped park Maksimir. This classic zoo needs some maintenance and since reconstruction began in 1990, it never ended and continues today.

Groundplan
The zoo in the southern part of the Maksimir park is stretched out over two islands and the mainland. The diversity of woody vegetation in the Maksimir park can also be seen in the zoo. Some old growth Maksimir natives still exist, e.g. the largest individual swamp cypress in Croatia and a group of London plane trees on the first island. You'll also notice the same paved paths, benches and low fences in the park and throughout the zoo.

Sculptures
A Neapolitan fisherman near a pond and concrete sculptures (1925-28) made by Jozo Turkalj, namely the four statues on the lion bridge and the Egyptian statues next to the reptile house, must surely be listed statues. The zoo is a protected landscape.

The lion bridge, the monkey house and the turret on the first island are worth mentioning in terms of architecture. The 1926 turret would have been the first animal enclosure, which almost immediately has been declared outdated.

Lion enclosure
The rocky "kopje" (outcrop) shaped lion enclosure, including indoor and outdoor exhibits opens June 14, 2014. Like in Wildlands Adventure Zoo Emmen the lions are supposed to use a heated rock in plain sight as a resting place.

Founded in 1925
After World War I Mijo Filipovic, first director of the zoo, establishes the first zoo in Croatia and Southeast Europe in the 18th century park Maksimir, with the support of the mayor of the city. Everyone is number one. Three foxes and three tawny owls are the earliest animals acquired for zoo Zagreb on the first island. That was the zoo.

1928 Temporary mini-zoo in backyard
In the good old days, some animals are moved temporarily to the backyard of architect Otto Prister, and exhibited at Jelacic Square 15C smack-dab in the middle of Zagreb, as requested by friend and colleague Filipovic. The animal exhibit was intended to be a fundraising publicity stunt.

Under never-ending reconstruction
Since 1990 (re)construction projects are still underway. Steel wire and metal wire grids are replaced by nature like ditches and water obstacles with marsh vegetation. Spatial planning caters for animal welfare with naturalized habitats and green roofs. In 2010 a general development plan has been launched including recognizable aspirations: animal welfare and conservation together with theming of the zoo and higher numbers of visitors. The plan presents:

Once past the green ticket kiosk, a small bridge leads to the old zoo on the first island with beavers, otters and the 1926 historical turret. Here the statue of the Neapolitan fisherman is situated at a bank.

Next bridge connects the first with the second island which used to be home to a diverse collection of birds. An inscription chiseled into a plaque upon an overgrown structure says this penguin enclosure was funded by the City Savings Bank of Zagreb. The second island offers a seal enclosure, a trapezoid shaped cage with ravens and vultures, a round building with all kinds of birds, owls and enclosures referred to as Madagascar (lemurs) and Australia (kangaroos).

The lion bridge really leads to the lions on the mainland and also to a concrete bear enclosure encircled by a tall wall that seems even taller because of the low water level in the ditch. Two brown bears are practising sit-ups with lifted forepaws. We admire the classy monkey house and the Egyptian statues next to the reptile house. The zoo features three African landscapes: savannah, swamp and desert with mostly outdoor areas, a restaurant at the far end and shelters for a variety of animals. Hoofed animals like camels and zoo areas South America, Asian steppe, Indian subcontinent and China are located on the north side of the mainland. 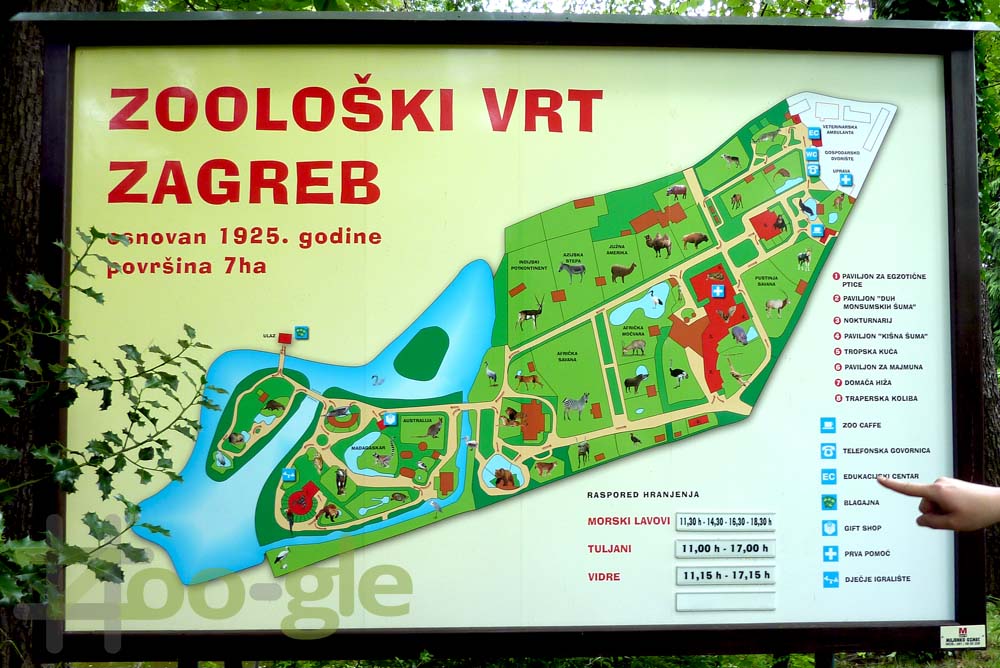 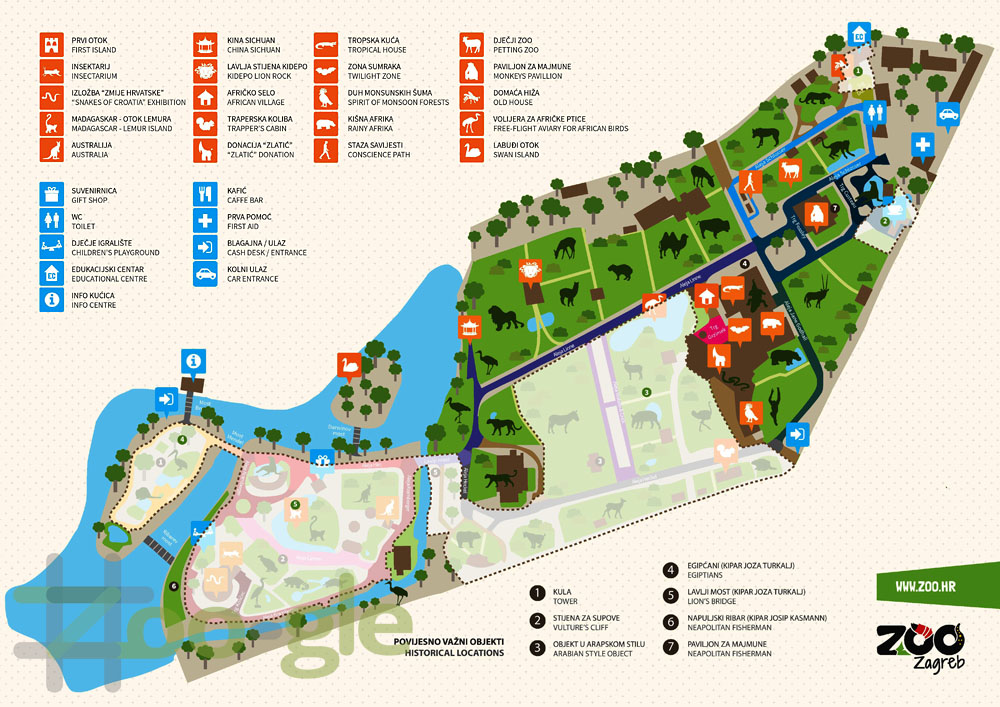