When you see the Warsaw zoo in the fairytale-like snow in Park Praski, you only want to go to zoos at a temperature of 23° F in a humid continental climate. The reflection, the white shading, the snow, making each enclosure look like a painting. Bare branches of winter trees silhouetted against the pale blue sky provide vistas that are missing in the summer. The zoo is laid out in 1927 in the former Aleksandryski Park. Landscape architect: Leon Danielewicz.

The old zoo
The shop of the Panda Foundation, Chata pod Strzecha or "Under the cabin's thatched roof" would be the oldest building (1928). Totally missed it! We have noticed Star Villa at the beginning of the garden though, also from 1928. This modernist-style structure is built for the management. The original zoo of 12 hectares must have been the part from the entrance to the fountain or Chata pod Strzecha. On the left of the road, not far from the entrance you come across a Polish Arctic landscape for seals and also an impressive polar bear retreat in abstract Hagenbeck style. It's not often that you see polar bears in a Cubist abode. This structure is built in the 1930s, just like the enclosures for the elephants, giraffes, antelopes, monkeys and hippos.

In the 1950s, zoo director Landowski has had built a polar bear swimming pool and the aquarium. Outside the zoo, in 1952, a concrete bear island is completed with water, sewerage and fence wire at the Solidarności avenue to attract visitors to the zoo in the other part of Park Praski. The brown bears can still be visited for free, apart from in winter. From 1953, there is a predator breeding center in the zoo.

Structure modern zoo
After his flying start with animals from other zoos and breeders, Landowski tries to run a modern zoo with new outdoor spaces, a waterfowl complex, a giraffe enclosure and breeding programs. The polar bear enclosure is completely rebuilt, the aquarium renovated and the facility services brought up to date. The Aquarium is obviously one of the older buildings in the garden.

During World War II, zoologist Jan Żabiński acts as the zoo director, a resistance fighter and the head greenkeeper of Warsaw. From the Star Villa, he and his family hide and save about 300 Jews in the zoo, using the piano in the living room to pass on warning signals. You can now visit the villa as a kind of war museum by appointment.

After expansion to 40 hectares, the zoo closes September 1939. Enclosures have already been hit by bombardments and animals have died, are shot, are found loose in streets and the most valuable ones are deported to Germany.

Jan Żabiński, injured and imprisoned in 1944, is reappointed in 1949. At the end of 1950, he resigns to write books and to make radio programs about animals.

However, the zoo is suffering financially every year more and more. Żabiński's successor Landowski dies in 1972 and only since the 1980s, when the city government allocates funds for the zoo, better times are ahead.

A graphic image of the residents is depicted on the outdoor wall of the enclosures, or a sculpture is placed on top of a pedestal nearby. Educational signs overloaded with information are refreshingly absent: informative but in moderation. Someone has done his best on flat nature paintings and pictures on the walls behind the animals as a variation on art above the bench. Pelicans behind glass and the Gibbons spending winter time in a holiday home. The Asian goat is hardly visible against the snowy landscape. Just like in the real reality!

A wide pedestrian path extends along the entire length of the park. At the end, the imposing outdoor areas for the big cats. Beautiful palettes! There are a baroque garden and a pond. Nice visual contact Monkey House and Warsaw. The accommodation of the guinea fowls consists of an indoor walkway for visitors, outdoor cages and consecutively arranged stone kennels that look like tents. The curves of the reptile house or Herpetarium recall Van Ravesteyn's designs in the Rotterdam Zoo. Striking multimedia presentation in the old aquarium: a projected school of fish flashes over the floor. 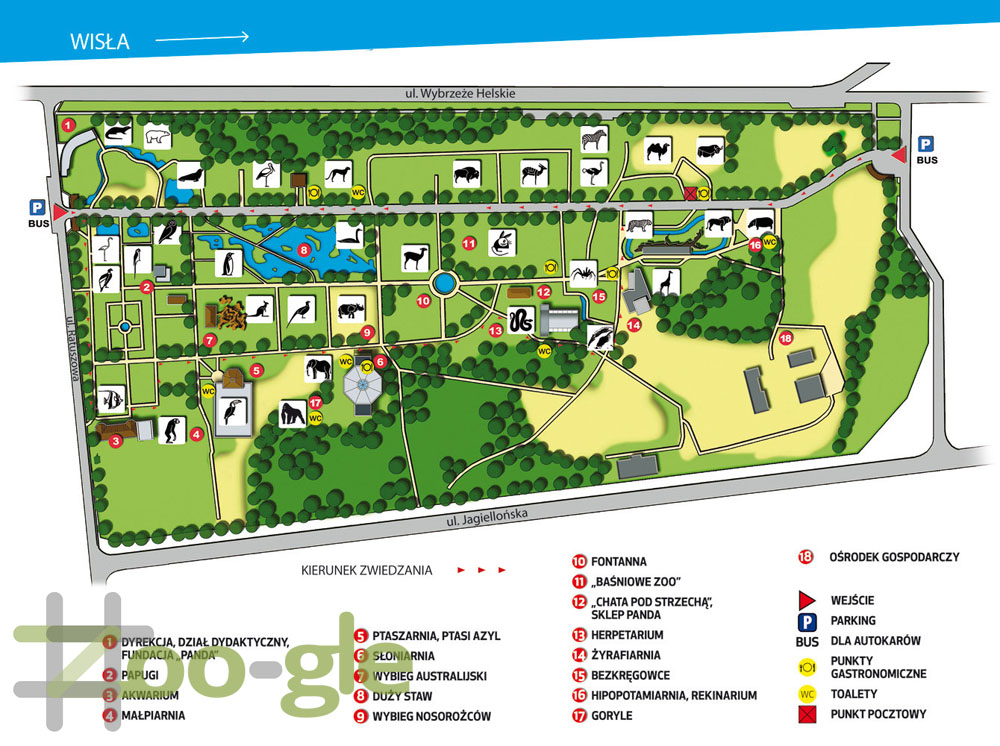