The imperial Schönbrunn menagerie has been established in the baroque gardens of the Summer Palace of the emperor of Austria and Hungary, Francis I. It is a baroque and the world’s oldest zoo.

18th-century zoo
The menagerie is inspired by the Enlightenment and Versailles rather than by oriental ornaments referring to the 19th-century longing for faraway places.

Whilst having an obvious interest in natural history Francis I invites his court architect and compatriot Nicholas Jadot to design a menagerie. The stylish results date from 1752 and are called the 'loggia circle': twelve enclosures of even size arranged radially around a central viewing pavilion. The menagerie is symmetrical like Versailles and exhibits Habsburg yellow buildings with green accents. The few buildings designed by Jadot are made with mathematical precision.

1759 The Emperor's Pavilion
The Emperor has his impressive octagonal pavilion built which is now the zoo’s most famous historical monument. Its interior is decorated with exotic animal motifs, and its ceiling fresco by Mildorfer represents scenes from Ovid's Metamorphoses. The imperial family has used the pavilion for breakfast and entertainment. Nowadays (since 1950) it serves as a restaurant for zoo visitors. It is said that the pavilion had an underground connection with the palace and that Francis I conducted alchemist experiments in a basement lab. In 1998 the interior, including the ceiling frescoes has been restored.

Walls are on three sides around the individual animal enclosures. Each enclosure has an animal house at the far end and bars on the side of the central pavilion. Baroque menageries are characterized by the circular layout. The walls have been demolished now, but you do see a stable at the end of each of the cut cake pieces, just as thenadays. To the west the circle includes a two-storeyed building intended as accommodation for the keepers (Workers Complex), opening into the gardens. In 1868, seals are swimming in the pool in front. In 1954, the statue of Pluto on a seal by Josef Haberl-Carlo was placed in the pool. Until the early 20th century, this part of the zoo owes its name ‘de Adelaarshof’ (Court of Eagles) to the two predatory bird cages on both sides of the staff building.

1841 Monkey Houses
The Monkey House occupated by birds before is reopened as Monkey House. Later on, in 1847, an octagonal cage equipped with ropes and trees is added. In 1899, diplomatic gift, as well as orangutan Peter escapes into a tree to be caught again a few days later.

In 1930 the Monkey House is reconstructed featuring a separate compartment for apes, some outdoor cages, and a larger window. The octagonal cage is enlarged too.

In 1995 the copper roof is renewed and the outdoor cages are lengthened thus creating opportunities for rain showers or sunbathing.

The Tiergarten presents itself as the zoo with the happy animals.

The new orangutan enclosure is installed in 1996.

Extension 1930s
Between the wars, a rocky sea lion enclosure at the east border of the pond has been installed (1934) and the east area of the zoo was enlarged in 1936.

1772 Giant Panda and Elephant House Renovation of the elephant compound includes enlargement in 1896. In 1928 a pool is added in the outside exhibit. An elephant is born is Schönbrunn, for the first time ever in a zoo. Until then it is widely believed that elephants in captivity do not produce offspring. In 1954 the bomb-damaged elephant enclosure is replaced. Wide trenches are used instead of iron bars.

The elephant training program (1961) appears to be public entertainment at the same time.

1909 Hippopotamus House
The first hippopotamus is housed in the Elephant House. In 1911 the Hippo- and Rhinoceros House is completed. In 1923 a pool is added in the outside enclosure. After World War II a new Hippo House is installed (1954) on the site of the war-damaged predator houses. The building has a concrete terrace and a pool in the front. In 1996 the terrace is transformed into an outdoor enclosure. In 2001 the inner pool is equipped with a filter system.

UNESCO places the entire Schönbrunn site on the List of World Heritage.

On July 29, 1772, Francis I is leading his guests through the privately-owned menagerie recently established in the park of his Schönbrunn Summer residence. The menagerie of initial variant houses animals (though no predators because of the smell) transferred from the menageries Neugebaüde and Belvedere. After the abolition of serfdom (1771) the Habsburg emperor Jozef II decides to grant public access to the menagerie, along with the imperial gardens, in 1778. The doors of the Menagerie open to decently dressed persons, initially on Sundays only. The menagerie is administered together with the palace gardens.

1828 Giraffe hype
1828 Giraffe hype Emperor Joseph II organizes hunting expeditions to Africa. The first giraffe at Vienna is the event of the year with hype in fashion, design, theater and even food (giraffe cake) just like France went mad the year before when the first giraffe arrived in the menagerie Paris. Despite all the fuss, the Giraffe House has to be enlarged...

World Wars
After World War I, the number of animals at Schönbrunn has shrunk from 3500 animals representing over 700 species in 1914 to only 400 in 1921. Vienna raises enough funds to save the menagerie.

As from 1924, Otto Antonius is the zoo director. This year the menagerie changes its name from Menagerie Schönbrunn to Tiergarten Schönbrunn, literally translated as animal garden. Antonius likes to quote Alfred Brehm: Animals feel at home in a good cage and they feel imprisoned in a bad cage. When he launches a program to breed back extinct European species like the European bison and aurochs, he was easily associated with nazism. Near the end of WWII -  bombs on the zoo and the Russians coming - Antonius and his wife commit suicide.

In World War II many of the zoo's buildings and enclosures are destroyed and over 1000 animals are killed. The Emperor's Pavilion is heavily damaged.

The live exhibits are organized by taxonomy. Penguins from the frozen continent of Antarctica next to polar bears from the Arctic, sure! There is plenty of information available without constantly being bombarded with information signs. Some lady visitors are wearing fur coats in the zoo. 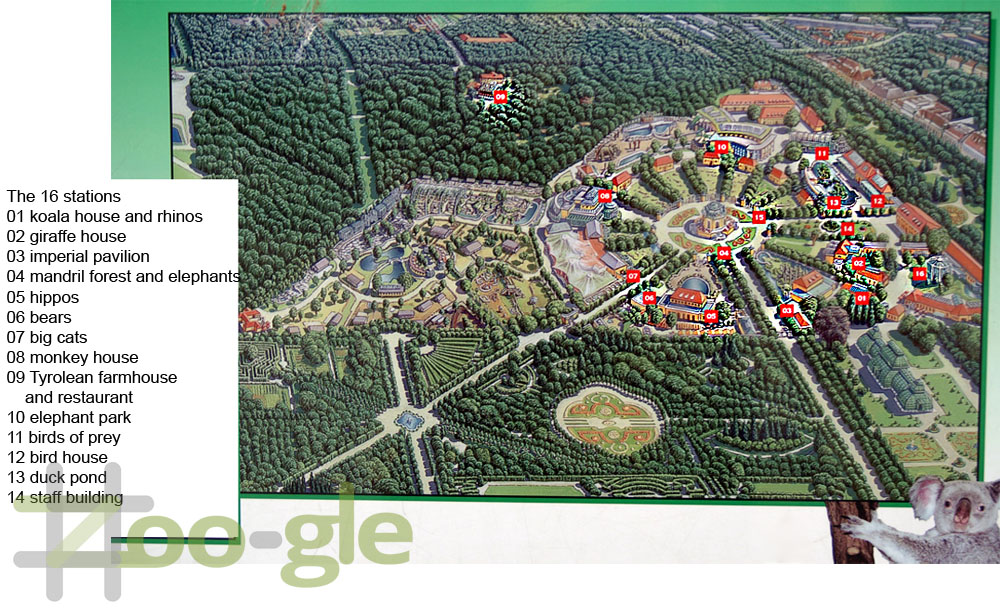 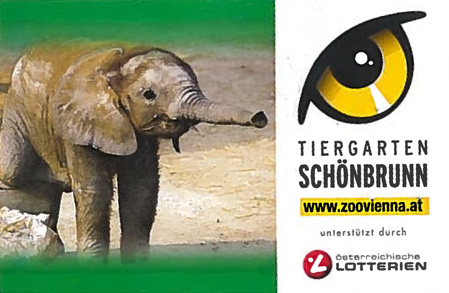 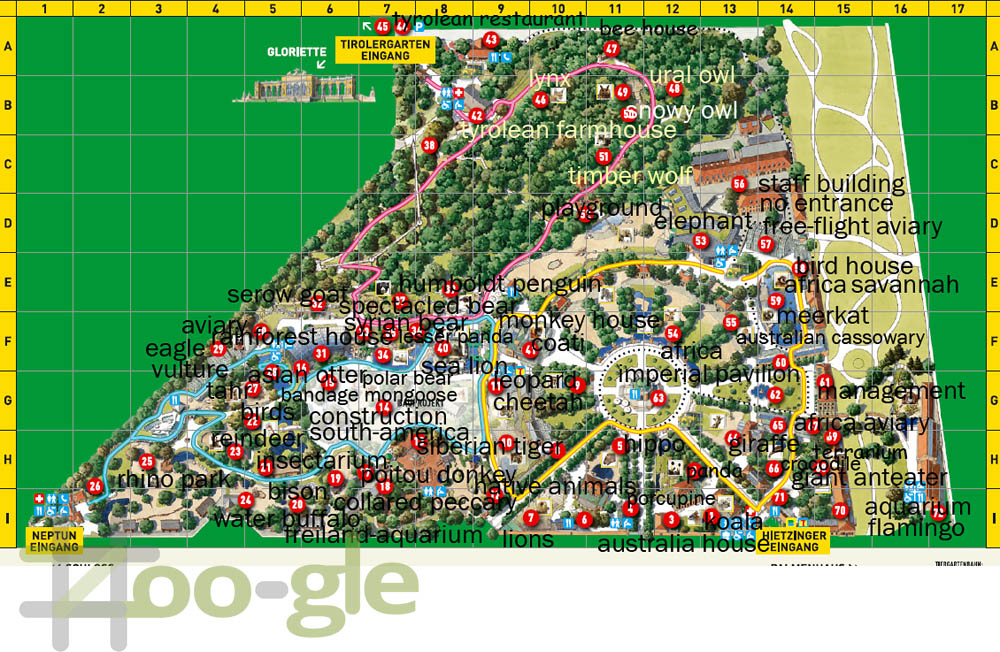 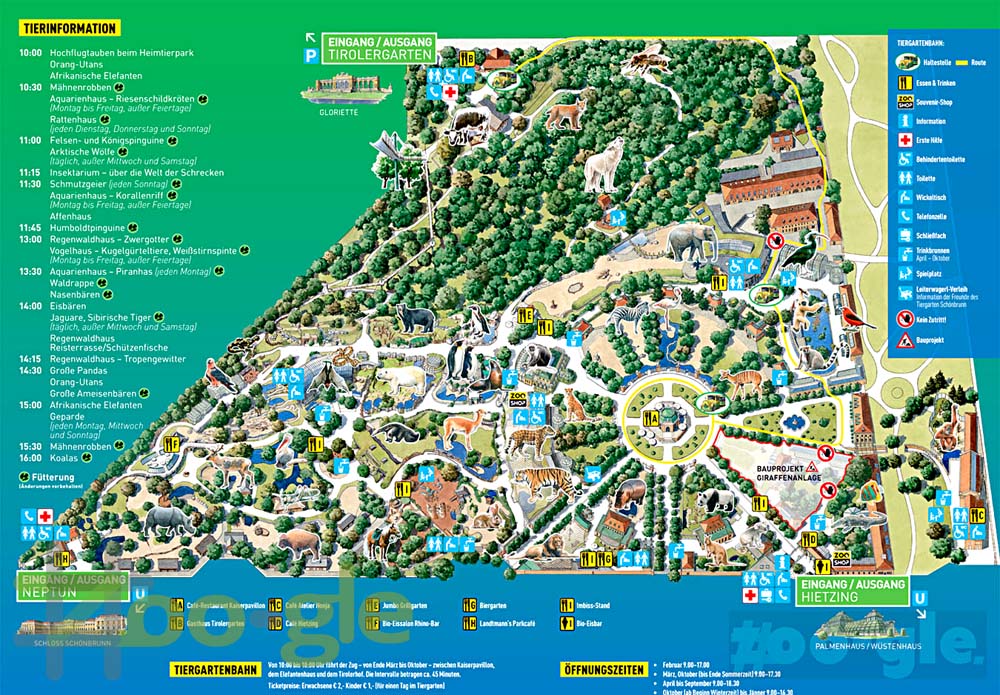