The zoo is located next to lake Ķīšezers in the territory of Mežaparks, full of pine trees. The zoo contributes to education, houses confiscated animals and returns animals to the wild.

The restaurant building designed by architect Hermann Seuberlich opens on Pentecost 1912. In 1948, an aquarium is installed in the right wing of the building.

Tiger house
The construction of the Tiger House (1913), financed by the Mason Radzíņš, is built to house lynxes. In 1933, the cage is adjusted for birds of prey. In 1936, the Riga zoo bought their first pair of Bengal tigers from the Hagenbeck company. In 1937, a heated building is constructed and connected to the cage to protect the animals from cold. Bengal tigers are kept in the Riga zoo until the mid-1980s and they were regularly breeding. Tiger Puršs was clearly the most famous, performing in circus’s and movies.

Lion enclosure
The first lion enclosure in Riga Zoo is built in the beginning of the 20th century, similar to the enclosures in the Hagenbeck zoo. It has been partly demolished in the 1920s. The new abode is designed by architect Kalinš and built with resources from the Municipality of Riga, in 1939. It encompasses 5 indoor compartments, public and staff premises, and an open air enclosure. The outdoor enclosure is later divided into separate compartments for several other species. Thanks to financial support from the Municipality of Riga, the lion enclosure has been restored, in 1998.

Second entrance
In 1920, the second entrance for visitors is added including a box office building by architect Seuberlich. The building is also used to house the guard. When the zoo reopens in 1933, a wooden gate is added. Until 1940 it has been the only entrance. Later, zoo workers and a police station take their residence here. From 1992, the structure becomes an insectarium.

Coffee pavilion
Following the founding of the zoo, there is a plan to have a large and luxurious restaurant overlooking Lake Ķīšizers where aquatic animals would be exhibited on artificial islands. Due to the shortage of money and the impending war, this dream could not come true. Yet, in 1914, a less pretentious coffee pavilion is built which is, several renovations later, still open to zoo visitors.

Rigas Zooloģiskais dārzs, an association of 26 people, has founded the Riga zoo in 1912. Among them, the two board members, director baron Peter Olcen, and zoologist Karl Grevé.

In 1911 the Bear House is completed and the Aquarium, Monkey House, Elephant House, entrance building and administrative building followed in 1914. In the afternoon, music is played in the restaurant, where the meetings of the association of the zoological garden also were held. The restaurant is open until 1918, to reopen in the summer of 1936. For many years, the employees are using the main hall for singing and theatre productions; however, since 1994, the amphibians and reptiles of Latvia are displayed here.

World wars
After closing in 1917 because of the First World War - zoo animals transported to Germany or shot dead - the zoo reopens on September 24, 1933. Only in the late 1930s, there is a new gatehouse. Between 1921-1936, the zoo serves as a summer camp for children. During World War II development stagnates, but animals and buildings are spared and staff lives in the entrance buildings. On November 9, 1944, the zoo opens again to the public.

Tram 11 cruises all the way from the Old Town to Mežaparks. Beyond impressive large cemeteries the Riga zoo occupies a 49 acre stretch of hilly wooded area where the usual suspects can be found. By sponsoring an animal, companies can place there logo. On November 13, 1998, Whiskas tiger house is opened, the first enclosure built since the 1930s. The history of the old structures has been well documented on information panels. 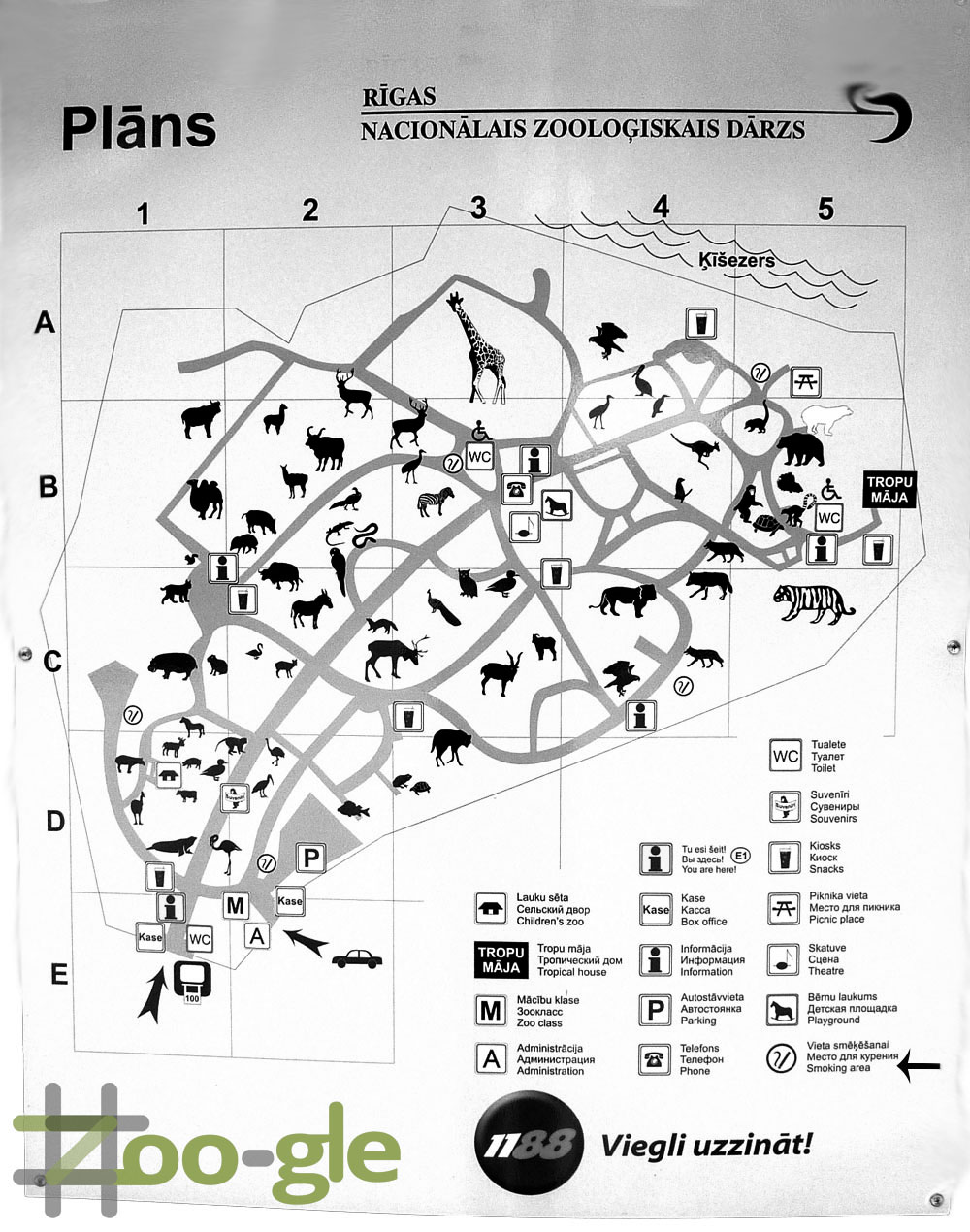 The information panels in the zoo
Website Riga zoo

Human Zoo, an installation and book by Erik Kessels for Riga International Biennial of Contemporary Art 2018