Started by two railway workers as a hobby, the Rotterdam zoo opens in the center, in 1887. When it is bombed in 1940 - animals on the loose in town - a new zoo happens to be under construction in the district called Blijdorp in North Rotterdam. The new Blijdorp zoo is a complete design by Sybold van Ravesteyn.

Follow the symmetry axis from the point of the original entrance, through the big cat enclosure, the Riviera Hall, and pond emerging towards two identical buildings, the old giraffe house (today lion enclosure) and a tearoom (today restaurant Poort van Azië).

On the available grid, he can’t get the garden to be perfectly symmetrical. That’s why the enclosures are constructed on a central axis. From here, curved paths feather out to several animal meadows. Terraces, enclosures, storage and fountains, everything all done by Van Ravesteyn in this part of the garden.

He places a kudu stable on the axis, behind a bear theatre, followed by the predator enclosure and the Riviera hall, with a 47-meter-high watchtower. The pond follows and a sea mammal enclosure. It all ends with the giraffe- and tea house, the twin buildings. Canals and ditches serve as barriers, and spacious outdoor enclosures are added. The common opinion at that time is that more space for the animals should not threaten their health, and that’s why the indoor enclosures get heating.

Rivièrahal
Eyecatcher is the big, indoor Riviera hall, a building equipped with a watchtower, designed as a winter garden. It’s no accident that the enormous hall looks like a station hall. The first version of Rotterdam Central Station of 1957 is also designed by Van Ravesteyn. The statues in the Riviera hall and the decorations on the edge of the roof are respectively by Van Eyck and by Den Besten. The watchtower has been demolished in 1972, to prevent accidental collapse of the structure.

The zero eras and master plan
In the zero eras, the zoo transforms into an ecological garden according to the master plan of 2004. One project follows another lickety-split. Animals are clustered by continent. Living artworks grazing in natural pastures.

Giraffe House 2009
LAM architects model the Savanah House after an African "kraal" using safe, recyclable, healthy materials according to eco-effective or cradle-to-cradle principles. The 570m2 round structure is launched as the most sustainable animal enclosure in The Netherlands featuring a hugging wall, smart passive solar heating, and maximized natural light and ventilation.

The 2010s: restoration
The listed buildings are modernized and adapted to the demands of the times while keeping the original design. Through the ages, much has been replaced with cheap materials, and, caused by several redecorations – put a small bin in here, bring the ceiling down over there – visual pollution occurred. The zoo starts to get things decluttered following the trends regarding sustainable materials, more consumption space and eco-efficient energy use. Visitors will experience having front row seats to nature, yet safely behind glass. Several architectural firms are working on the entire project.

Everything seems to be restored in the spirit of Van Ravesteyn. Reputation covery after the demolition of the station designed by him?

Giraffe House 2009
LAM architects modeled the Savannah House (2009) after an African "kraal" using safe, recyclable, healthy materials according to the eco-effective cradle-to-cradle principles. The 570m2 round structure is launched as the most sustainable animal enclosure in the Netherlands featuring a hugging wall, smart passive solar heating, and maximized natural light and ventilation.

Pachyderm wing in Riviera Hall
Today pachyderm wing, launched in 2013, has been restored to regain much of its former glory as well as to serve the needs of contemporary zoo life. The result is a white-coated public corridor where all interior elements that had been added over the years have been removed featuring new benches now, an exhibit wall and renovated indoor enclosures for the rhinos and the pygmy hippopotamus.

The design could not stop the rhino’s from urinating backwards into the direction of the public, though. They make a mess of the concept that they should be visable through the steel poles, that in their turn look like tree trunks.

Kudu stable (1939/2016)
The wooden animal enclosure Van Ravesteyn placed behind the bear theatre must have been replaced between 1993 and 2008, as shown in the zoo maps. Siebold Nijenhuis Architect boldly converts the structure. Launched in 2016, the kudu stable has been restored to its original colors and got ceramic roof tiles, identical to the original ones of 1939. A newly created public passage gives access to the stable and the Africa route.

The rise of the railway system in Europe coincides with that of the zoos in the 19th century. Exotic animals reaching Europe by ship, continue their journey by train. London from 1828, Dublin from 1832 and Amsterdam from 1838 onwards are the first capital cities having a city zoo. And it doesn’t stop with capital cities, industrial and harbor towns like Hamburg and Marseille get their own zoo. Rotterdam gets one in 1940

Listed status
From 2007 on, the old zoo, with its 21 monuments by Van Ravesteyn, is declared a national monument.

It is nice to know that the bridge on the right side of the entrance contains two cornerstones by Henk Chabot, from the 1930s. The east side shows an eye catching head, the other side a damaged statue of a child with an animal.
Van Ravesteyn has created a dance of lines, and there is no shortage of construction initiatives. Cracks in concrete structures have obviously been repaired with a bad concrete mix. Could the pygmy hippopotamus swim through the design in such beautiful figures in April of 2005, or is the opposite true? Half a year later, it is lounging outside in the sun, while people renovate its enclosure in the Riviera Hall. At the end of 2006, its biotope has been furnished with artificial trees.

Van Kuilenburgs Medusa heads rest on fluted columns meant to serve as abrading pole for elephants. The giraffes walking outside don’t give a toss about abrading.

Checked out the construction activities on the site of the demolished sea mammal enclosure. From here I walk past the herd of Asian elephants, to an unlikely decorated Taman Indah of 1994, in actual fact a big greenhouse with hydraulistic rods, plastic termite hills and jungle pattern painted back walls. One big tropical-rain-forest-of-South-east-Asia illusion. Pretty? Meh.

Autumn 2005. Blijdorp has the green fever and there is bamboo growing at the Long House. Lots and lots of bamboo. Where are the scenic views of the meadows? Botanically speaking it’s not all that anymore. The polar bear enclosure has been replaced by a tiger enclosure, a gift from Blijdorps friends. This year, continent Africa is decorated as well, a package deal of animals around a drinking area in Blijdorps very own savanna.

To call an animal enclosure a savannah already points out that animal well-being and natural habitats have become central elements of zoo design. It could be expressed in how many squared meters per animal is needed. Is there already a bill for this?

To call an animal enclosure an adventure is taking it to the next level.

The 2011 renovation radiating from the original Van Ravesteyn-entrance Van Aerssenlaan, the Rotterdam zoo is 160 years old now. On the old courtyard, Van Ravesteyn's renovated structure the "Store of Sinkel", once hidden behind the penguins, is shining under its metal edge with monkey cutouts. The zoo has proceeded to implement the master plan of 2004 further, especially Africa. An adhesive label is fitted to the door of the Pachyderm wing in the Rivièrahal: Rhino urinating backwards! The savannah house seems a not unfriendly looking African onion. 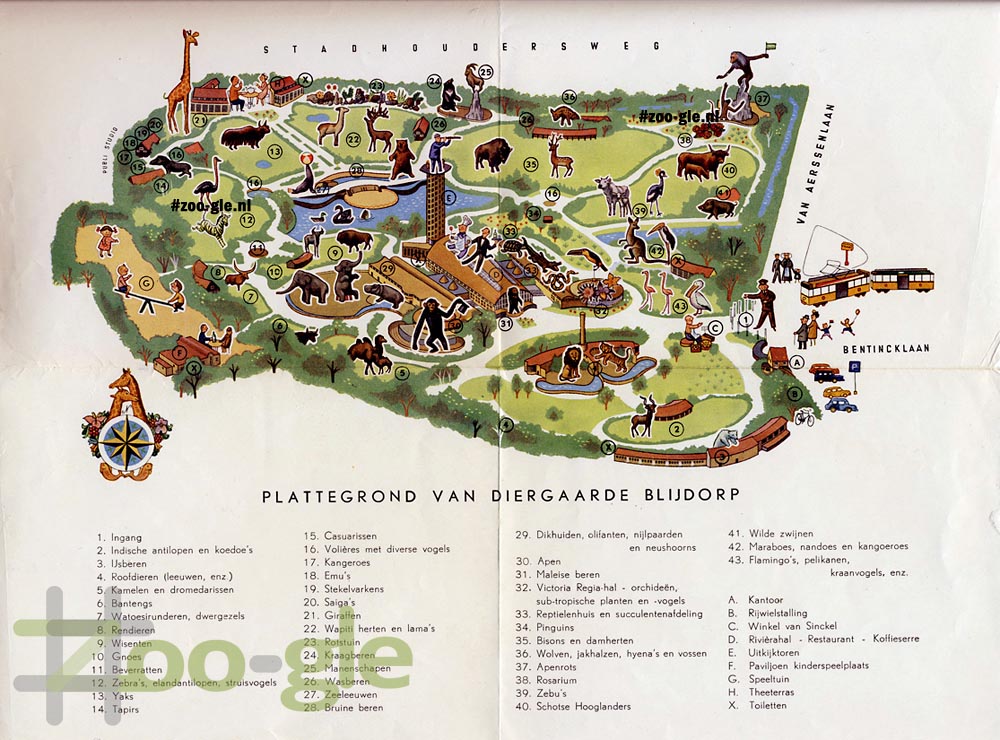 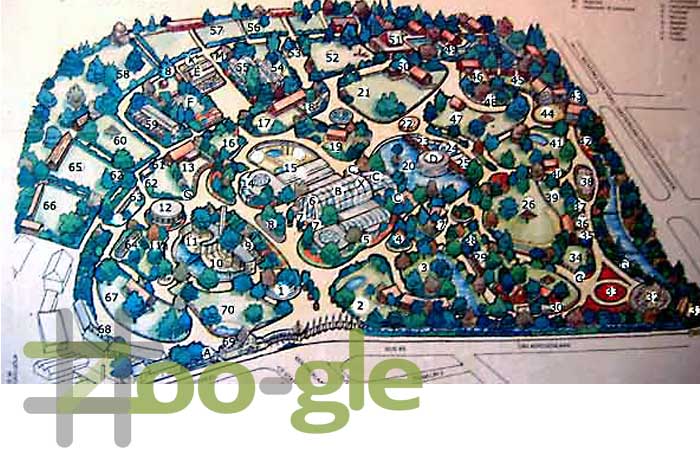 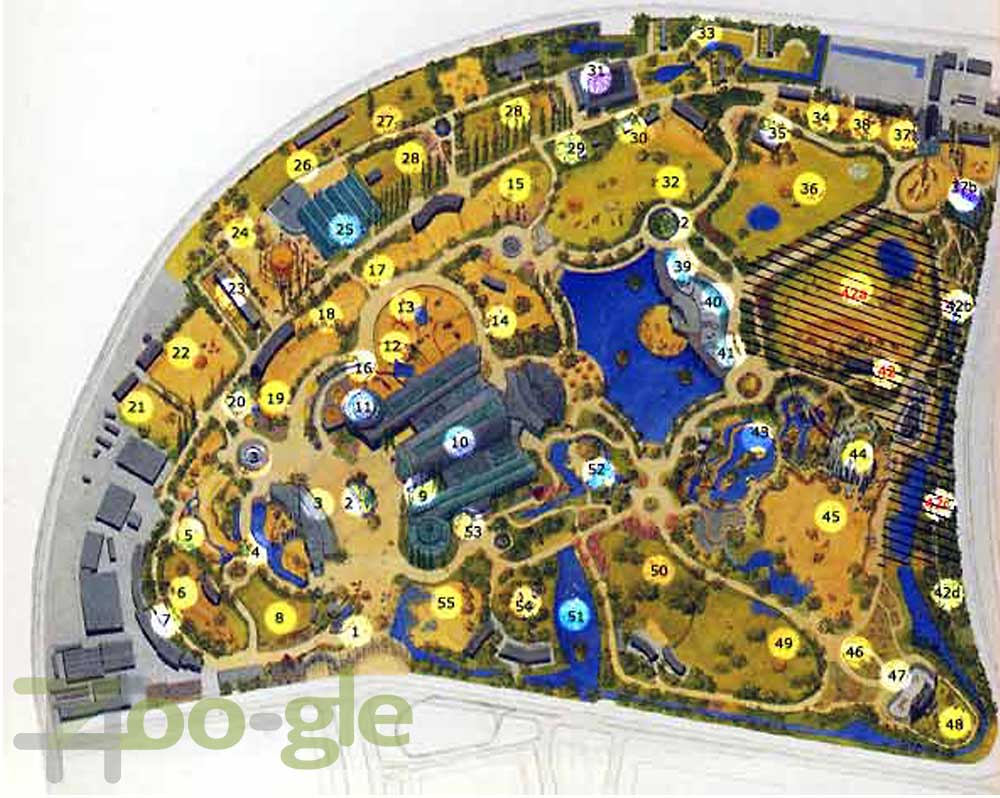 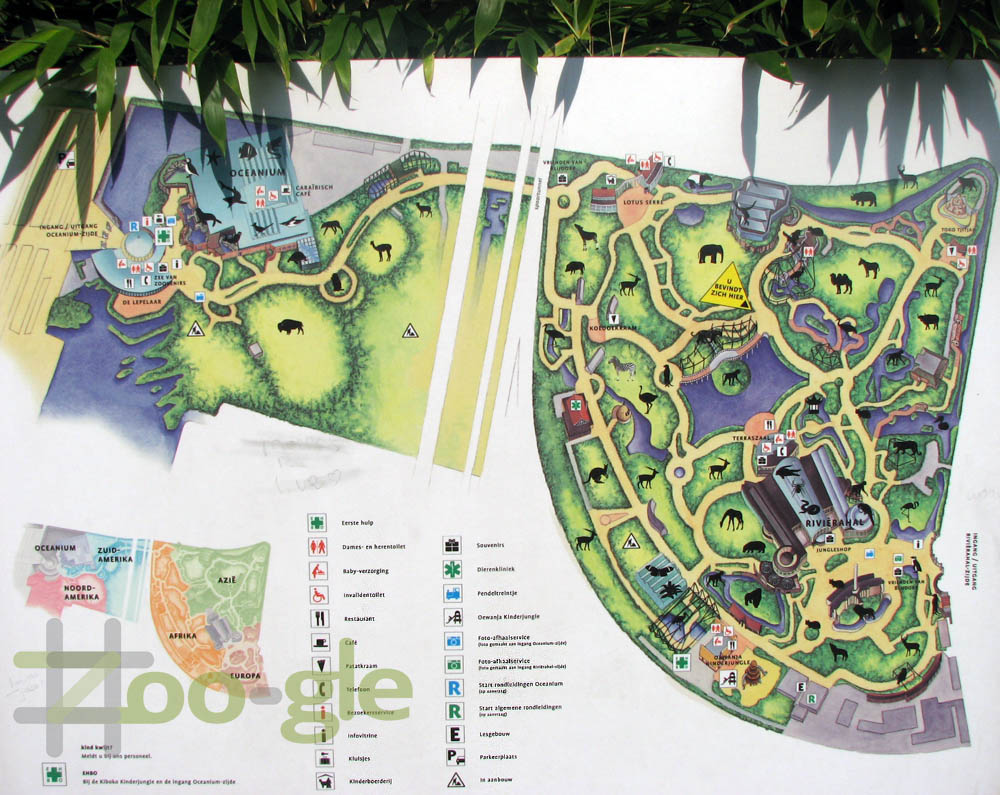 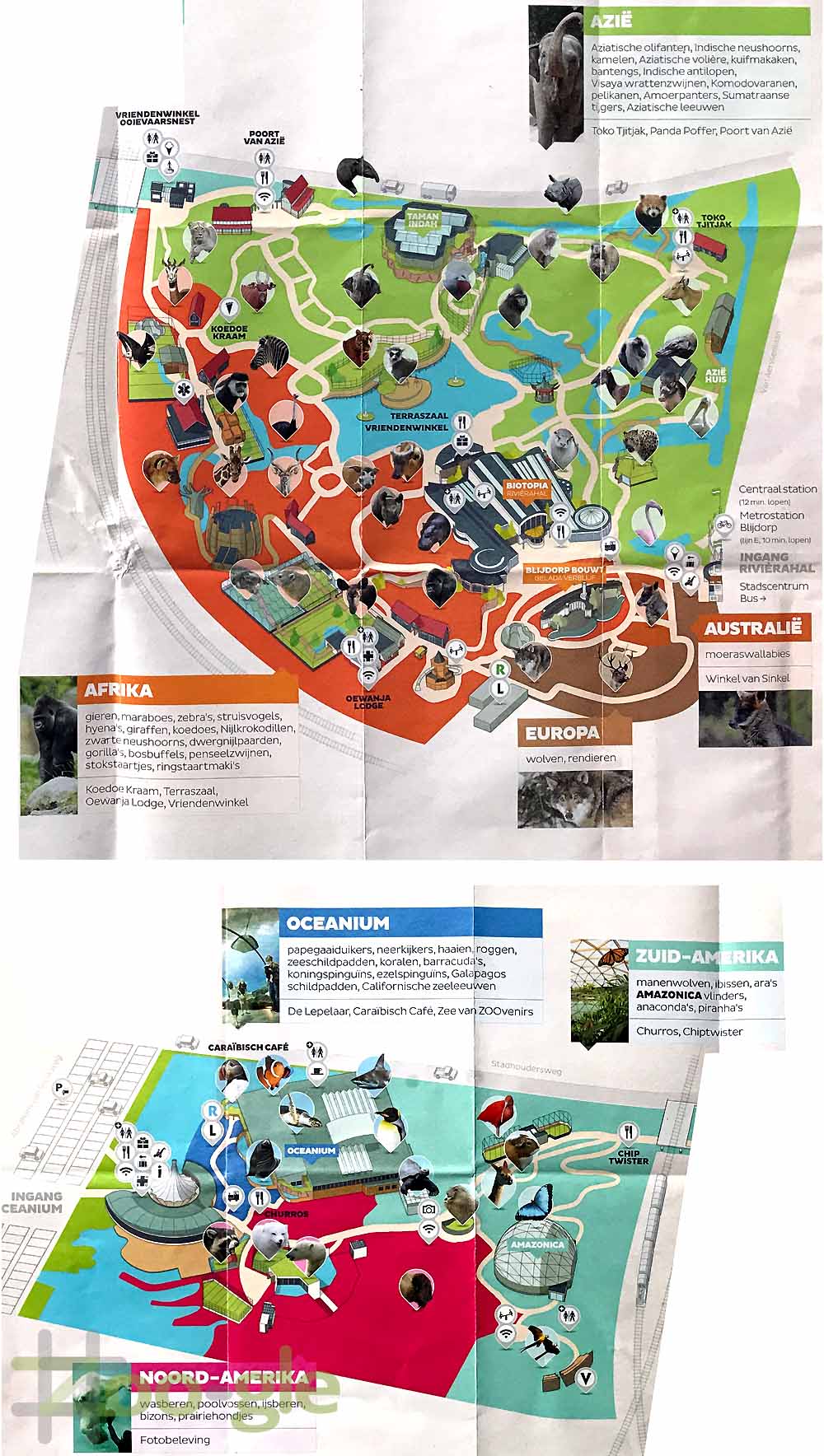