Started as a chicken farm, transformed into a zoo, the Ouwehands Zoo opens in 1932. At the turn of the Millennium, entrepreneur Marcel Boekhoorn is the saviour of the zoo at a time of financial stringency. April 2017, the arrival at Amsterdam of the bamboo-eating museum pieces Beautiful Powerful Cloud and Elegant Star is broadcasted on tv. Their Chinese temple in Rhenen, in which the sound of water may not disturb them, has been approved by a Chinese delegation.

1995 Bear Forest
The Bear Forest initiated by Alertis and Ouwehands Zoo is a sanctuary for abused bears and also home to wolves. The 2 ha semi-natural enclosure is divided into two parts. From a platform between a bridge and a tunnel, visitors have a nice view of the forest.

1997 Tiger Forest
A natural-like habitat for Amur tigers. The design includes a tiger tunnel lined by glass panels for spectators.

2000 New enclosures for orangutans and polar bears
The orangutans get an enclosure with a system of ropes and wooden stakes partly located outdoors for vine swinging above the heads of the zoo visitors.

A new polar bear enclosure opens in June. The bears are separated from the visitors by 40 mm thick triplex glass.

2005 Out of Africa
The launch of an African village, Umkhosi, safarilike playground for children.

2007 75th birthday
Ouwehands zoo celebrates its 75th birthday with an exhibition of old pictures and the launch of a new enclosure for Humboldt penguins and for African Elephants.

2013 Gorilla Adventure
The curve radius of this building is constructed by steel A-frames of about 10 meters high placed in a banana shape behind each other. A walking and climbing route for visitors is laid out over three floors featuring on one side a 700 m² steel outdoor cage and against the outer edge of the banana shape the 1000 m² winter enclosure. The animals can be seen through high glass panels. The glazing method ensures that the apes can only strike the glass into the rebate. Cavities in the steel are filled to dampen the sound of gorilla against steel. Catering in the middle of the enclosure and above are the office spaces for the owner, investor and soccer club NEC sponsor Marcel Boekhoorn as well as a panorama tower on a tripod of four columns.

2015 Electric eel in the Aquarium

2017 Pandasia
Pandasia is built like a temple in traditional Chinese style with curved roofs reminding of the dragons holding heaven and earth in place. Roof and facade elements are made in China. A Chinese wall starts beneath the entrance pagoda at the indoor and outdoor dwellings of the giant pandas leased to the animal park for 15 years. Panda diplomacy with a price tag of € 1 million a year. A wooden bridge connects two structures. The large building offers plenty of room for restaurant and merchandise. Pandasia has a size of 3400 m² and is part of a larger Asia habitat.

1919 Cornelis Ouwehand exchanges his cigar factory for a chicken farm on the Grebbeberg. In the early 1930's, however, people find the exotic peacocks and racoons way more interesting than his chickens. He takes a closer look at zoos and makes his farm a 10-hectare zoo, which opens the gates to the public on June 18, 1932.

World War II
After the outbreak of World War II, the Dutch army ordered that the carnivores at the zoo be killed to prevent their escape during attacks. It was done partly by the military and partly by Cornelis Ouwehand himself. He succeeded to rescue a polar bear and two cubs, though. Following the surrender, he started to rebuild the zoo grounds. When the Allies landed in 1944, the German army ordered all animals to be shot, partly for food. Zookeepers gathered the animals to take them into the forest around Veenendaal, where many of them survived.

The zoo was expanded to 22 ha during the following decades.

Millennium
At the turn of the Millennium, entrepreneur Marcel Boekhoorn is the saviour of the zoo at a time of financial stringency. The new owner has invested substantially - and successfully - in renovations.

A sometimes elevated walking route funnels the visitors to the next enclosure. In this way, the back door of the Aquarium gets you into the walkthrough griffon vulture aviary. A piece of the outer wall of Gorilla Adventure is covered with faux stone panels and if rope ladders had not been invented yet, someone in Rhenen would have. What you'ld call a children's playground featuring animals. The indoor enclosure of Mrs Panda makes you think "pandamonium" and "I can has Chinese wall?" as a variation on LOLcats' cheeseburger. The humans and the Chinese like it so much, though, this striking piece of zoo architecture. 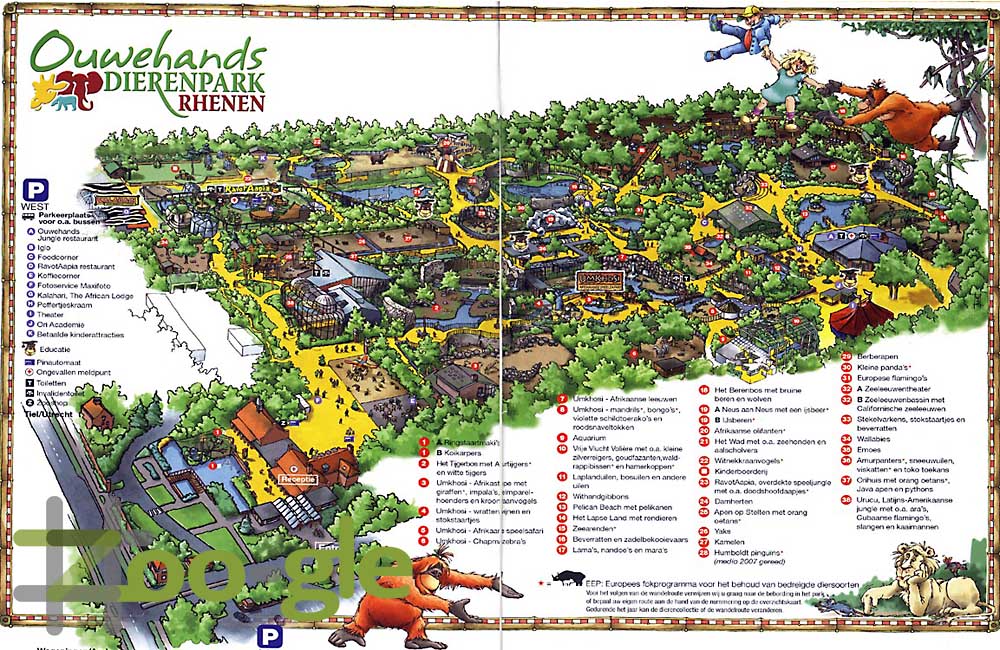 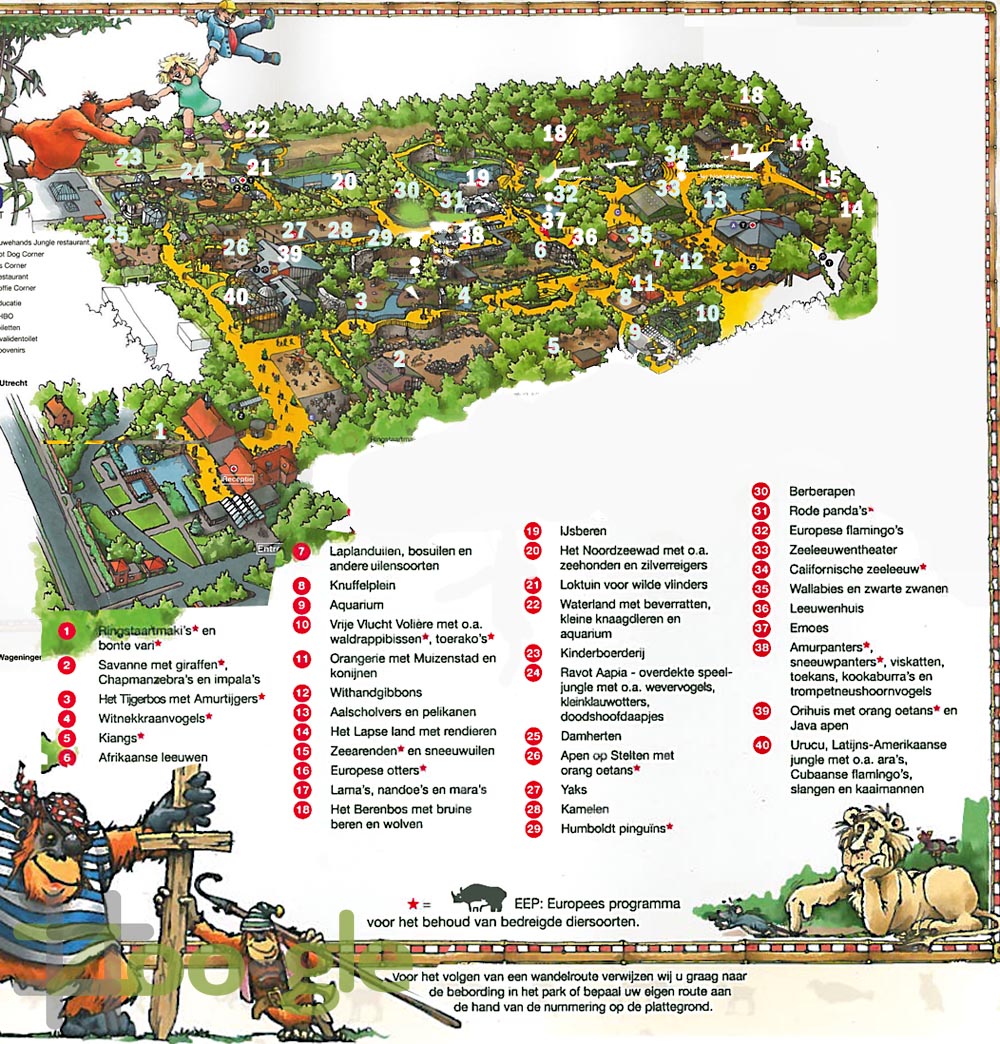 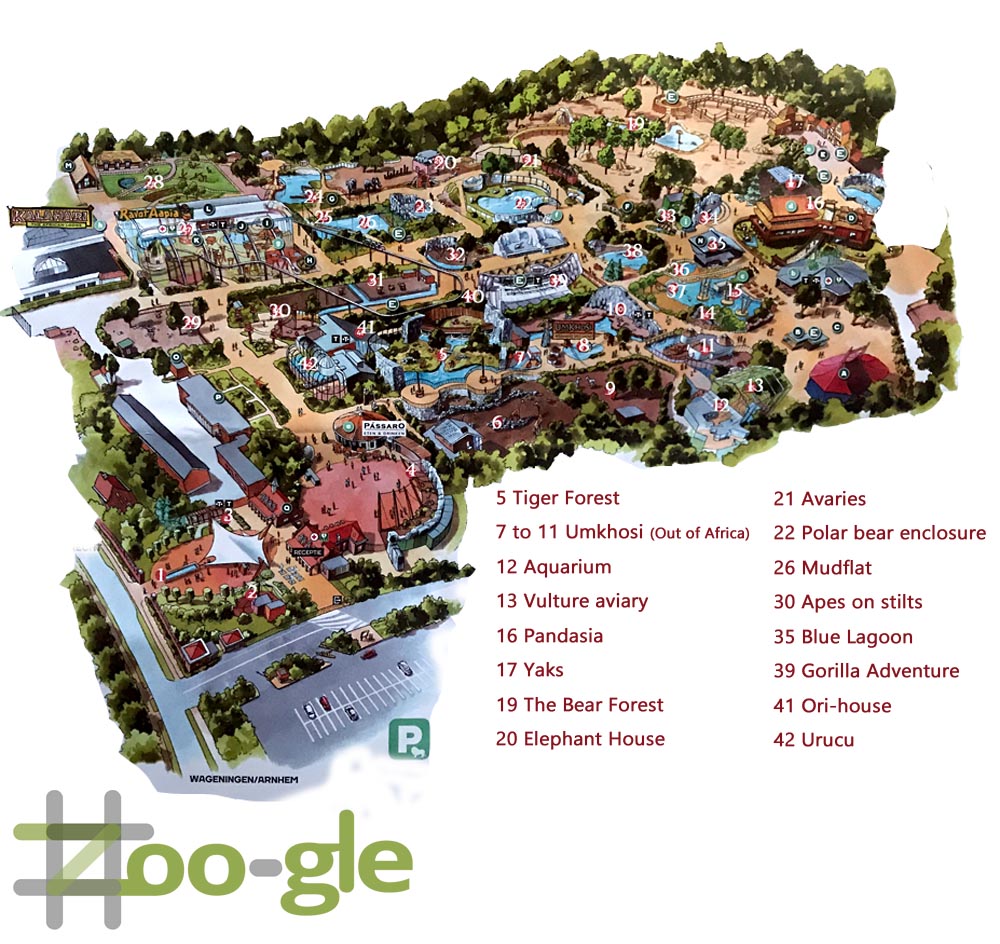