The name WILDLANDS Adventure Zoo is the sublimation of "A world expedition in Emmen", the tagline of the former animal park Emmen.

The website of Kondor Wessels Projects states:
"Scrambling through tropical vegetation, balancing across the suspension bridge towards the elephants. Nothing is too crazy for the designers. Don’t be surprised by the sound of rats buzzing by in the belly of a ship. Penguins swim past the portholes."

The animal park made mockups of custom enclosures in 3D-software and Volker Wessels has made a scale-model of the adventure zoo (1:37).
Mission: a human adventure through the world of wildlife.

How to manage animal visibility in spaciously landscaped enclosures?
The park is a theme park where the former zoo-goers had expected more zoo, or rather more zoo animals, or rather more zoo animals that can be seen. Not so crazy, when you have converted your annual subscription. Slight disappointment perhaps at Jora Vision, too, when the project ran into financial difficulties, misery, malheur.

Initially, the planners had helped the lions to lie in plain sight by heating some rocks. In response to visitor's reactions on social media, the zoo has moved the toys the polar bears play with, closer to the visitor's section. And the app helping visitors to navigate without signposts, has been complemented with physical signs.

Landscape immersion
The 54-acre park could expand another 25 acres and has approximately 430556 square feet of covered space for visitor use, including a large theater, to facilitate visits even if the weather's not at its finest. On the Compass square by the communal entrance that is shared by Wildlands and the theatre, visitors can choose from three climate zones: tropical forest, savannah or polar region.

The polar region is fun because you can watch the polar bears from the Arctic next to the penguins of the Antarctic and, by the way, next to Californian sea lions. The polar bears are having a wave generator. Glass viewing walls in the basement of the polar station offer visitors a view of the animals. Penguins can be seen through underwater periscopes.

Every climate zone offers a recreational activity for children - like a raft - its own adventure story, and its own type of transport. Exploring the wild world of animals in an expedition truck, is called landscape immersion. The concept of immersion design is to merge animals and visitors in the same simulation of a theme area, habitat or landscape.

The tropical greenhouse in Jungola, behind the facade of a temple ruin, is the largest one in Europe. Here the animals have their very own way and visitors make their ways along the walking path or by boat or truck. Just one look at the queues and you know at once: this is an amusement park. All plants and shrubs have been imported from Costa Rica. The climbing trail is not for the monkeys.

The animals of the successful African savannah of animal park Emmen, have moved to Serenga. It is the largest and African-themed climate zone. With a bit of luck, visitors can see the lions, from a walkway. Hippos can be watched underwater, now. Serenga provides access to playground paradise Animazia.

Where were we? At the end of 2015, the sympathetic animal park Emmen that started in a backyard just like in a children's book is closed down. The municipality of Emmen hires Volker Wessels projects to re-develop the zoo grounds for €110 million. On March 25, 2016, the new theme park opens. The design is in the hands of an in attraction parks specialized bureau: Jora Vision, known for the French Futuroscope, De Efteling in The Netherlands and Tivoli, Copenhagen. 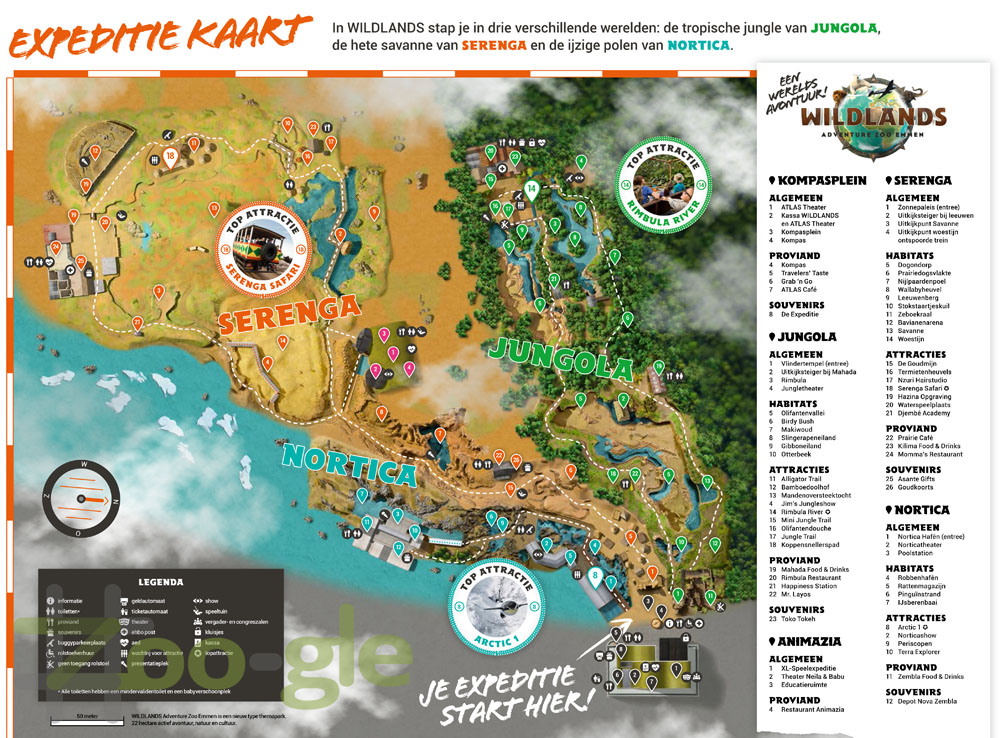