Burgers' Zoo is a time machine featuring a Hagenbeck area filled with 19th-century elements, a Safari park and, to top it all off, a few giant eco displays full of hi-tech and superlatives.

Iconic Hagenbeck enclosures
The iconic enclosures such as in Carl Hagenbecks zoo Hamburg date back to the 1930s. The penguin enclosure behind the entrance is such naturalistic "Hagenbeck" often dressed up with artificial rocks, water and more vital 19th-century landscape elements. All signs of confinement are obscured. In the areas called Park, this style that forces visitors to experience nature at close quarters can still be seen.

Hyper-realistic eco displays
The family business continues on the design theme "more real than reality itself". From ≈1980, huge covered areas are launched in which animal habitats have been recreated. These artificial landscapes are manufactured by stage builders, technicians and garden specialists. Advice from biologists help to maintain the plants and animals' health and a lot of high tech keeps everything under control. For the zoo tourists who also wander around through the eco displays, thought has been given to education while PR departments can imagine events unfolding in the same area. The main road connects the large-scale accommodations.

You may not see any Disney princes but otherwise the American theme park concept of Disneyfication or Disneyization is complete. A mass attraction where the ecological exhibit is the only reality. Everything takes place inside, where the buildings themselves have little appeal.

Bush 1988
Under the thenadays largest air cushion roof ever built the public takes a walk in the humid heat of the 1.5 hectares tropical jungle, landscape immersion at its best. Bush is a replica of the Amazon Forest. ABT received the Dutch and European Steel Award for the steel construction. ABT is part of Burgers' Zoo's own design team.

Desert 1994
The neighbouring Sonora and Mojave deserts is the theme of Burgers' Desert. A tunnel connects the 3/4 hectare hall to Bush. Like Bush and the Mangrove Hall, Desert has the highly translucent, isolating and fire-retardant cushions for roofing. Also, as in the other eco displays, the theme is reflected in the food and beverage establishments.

Mangrove Hall 1992 and 2017
During the construction of the old Mangrove Hall which originally served as a test case for Burgers' Bush, the German engineer Vogler came up with the by now familiar EFTE roof cushions of 3 by 6 meters. The Mangrove Hall 2017 is themed like Belize starting with Caribbean houses on the forecourt. The largest mangrove hall in the world is a dome with the same diameter as the Arnhem dome prison, 60 meters. The highest point is 16 meters above the ground. The round shape and the frame with roof cushions ensure that daylight enters as much as possible, trees grow tall and certainly affect visitors' experience. The roof that is not supported by pillars from the inside has a ventilation hatch. With ingenious sun protection and a heat/cold storage installation, the temperature is controlled. Of course, there is an adventure trail along with 1000 butterflies fluttering and 3 sea cows swimming in 1 million litres of fresh water which can be viewed through a 12 by 1.8-meter underwater window.

Ocean 1998: 8 million artificial seawater
Submerse yourself into the ocean while you remain dry, is the idea. I guess the Swiss zoo Basel has sent scouts to this ecological exhibit. Via tropical beach and lagoon, you enter the coral reef. In two tanks a presentation of the nightlife. The final piece is the sharks behind a one-piece curved panoramic window of 6 by 20 meters made of 3.5 cm thick PPMA. Especially in 1998, the largest aquarium window ever.

Modern architecture
Rimba has been adapted for tigers and bears since 2009. Indoors a lot of glass and wood and outdoors a lot of bush between animals and the public. In 2012, the main road in the zoo is finished. The zoo entrance got wide staircases also providing seating. At the top of the stairs, a warm welcome expressed by a group of animal statues. Behind the meerkats' enclosure (a Hagenbeck) the Kids jungle (2012) appears with wavy lines to create organic forms and refined use of glass.

In 1913, Pheasantry Buitenlust in 's Heerenburg is open to the public as Burgers' Animal Park. Eleven years later the Open Air Museum in Arnhem gets Johan Burgers as a neighbour. He and his wife always have a suitcase ready to go to get inspired in other zoos. The Hagenbeck enclosures à la Zoo Hamburg can be related to the friendship between Johan Burgers and Carl Hagenbeck.

After the war, daughter Lucie Burgers and son-in-law Reinier van Hooff rebuild the damaged zoo and experiment for a short period with the name Burgers' Nature Animal Park.

Director Antoon van Hooff (1962-2004) develops Burgers' Safari, Bush and Ocean. In 1968, The Lion Park is the first of its kind on the European continent. At first, the public could visit by car, later by train. From 1995 on the animals can only be viewed from a 250 meter long covered walkway. Van Hooff even launches the word safari park. With the (also) first chimpanzee colony in a zoo (1971), Antoon and his brother/biologist Jan van Hooff gained recognition for their contributions to ethology in the Netherlands. Science and zoo hand in hand. With Burgers' Bush (1988), Van Hooff once again comes up with something spectacular which he named eco-display. In 2008, Burgers opens eco-display number 6, Rimba.

Successor Alex van Hooff brings the master plan 2006-16 featuring, among other things, the main road and efficient energy use. From 2013, the zoo may call itself "Royal Zoo".

You can find plenty wrong and still enjoy it. The old accommodations and the autonomous eco-displays have a completely different look and feel. The Hagenbeck enclosures look a bit run down. Are they getting saved and refurbished? The mega halls where eco-displays dictate reality (Baudrillard) are like neonatal incubators. I am in agreement with Jane Jacobs’ dictum that "Old ideas sometimes need new buildings. New ideas need old buildings." Of course, the panoramic shark window is impressive, but not big enough! Too many silhouettes of people and buggies in front of this window to the underwater world. The Veluwe trees participate nicely in and around the outdoor pens and the timbered window frames. 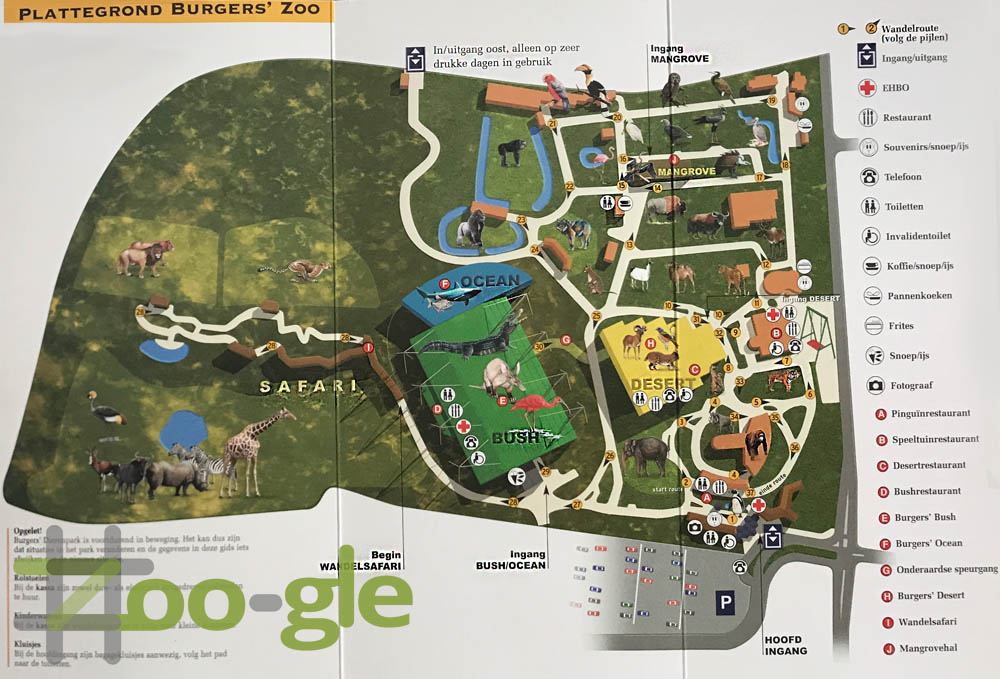 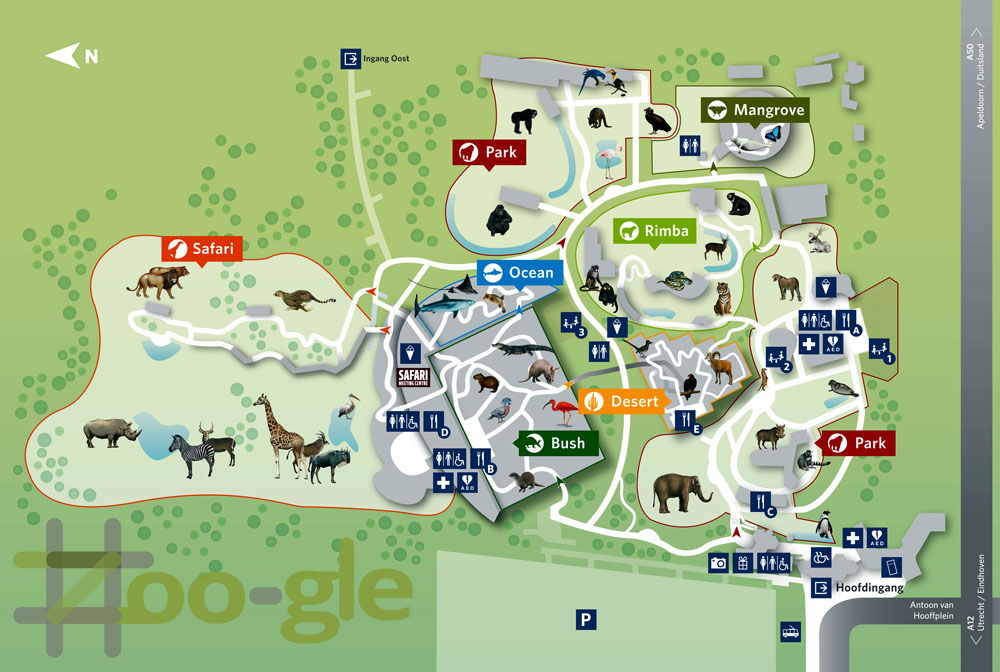