The 19th-century city zoo Artis is founded to spread natural knowledge and has been focusing on education ever since. Thousands of school children visit the Amsterdam zoo every year. The zoo also offers painting courses and has its own Artis Academy with Artis professors. Other keywords are museological, botanical and integral. It’s the first zoo in the Netherlands, and the seventh in Europe.

The old buildings together with the trees of at times an impressive 150 years of age shape the main and transverse axis of a cross, the basis of the garden. Meandering footpaths past decors in several styles of garden and landscape architecture create ever-changing sightlines. This scenery landscape causes the garden to look bigger.

Listed monuments
The 19th-century zoo was designed by architects Van Lunteren (landscaper), Salm, Ouëndag and Klinkhamer. Artis has documented every monument, every enclosure, every image, every tree and every animal both on location and on the website. House of Wolves, small Masman house, and other buildings are older than Artis itself. The zoo contains 27 monuments, among others, the main entrance, the Dutch garden and the Kerbert Terrace of the lions.

Predator gallery (1859)
The first design by architect Salm in Artis is the predator gallery next to the Dutch garden. The original structure consists of concrete, a lot of cast-iron as well as decorations. There are only indoor enclosures and a covered conservatory for the public. Once the roof disappears in 1930, the conservatory transforms into outdoor enclosures. In 1975 the bars are replaced with wire mesh.

The most photogenic animals in predator gallery are remarkably hard to photograph. This is equally true for the new panther enclosure! October 2015, Salms gallery is demolished in favor of the elephant enclosure.

Aquarium
In 1882 the doors open to the then biggest and most modern aquarium in the world. Also by Salm. Seawater is obtained with steamboats to then be pumped into ships small enough for the waterway to Artis.

The Perseverance
The structure behind the vulture aviary stands on the foundation of rice warehouse De Volharding or rice mill Java & Carolina which housed the Ethnographical Museum Artis, 1888-1910. A floor and corner pavilions have been added for this purpose. Birds and cattle continued to live on the ground floor. In 1922, an extra floor under the roof was made under the supervision of architect Ouëndag during a renovation (lecture rooms). The vulture aviary is from 1988.

Romanticism
The owl ruin and the red facade of the elephant enclosure are romantic constructions of which the first mentioned is created with rubble from the Brabant castle Brederode. In 2018, Artis takes up the plan to turn the owl ruin into a walkthrough enclosure.

Minangkabau house (1916)
This half-timbered Sumatran spired roof house fits the 19th-century trend to include the exoticness of the inhabitants in the architecture, somewhat comparable to the Moorish temple for antelopes in zoo Antwerp. When it became a monkey enclosure, climbing frames in the shape of the Minangkabau house were added. Minangkabau houses are traditional matriarchal homes in West-Sumatra.

The zero eras: savanna, butterfly greenhouse, lemur land and master plan
Landscape immersion can no longer be ignored in the zoo. In 2002, the African savanna opens at the former 4 hectares sized marshalling yard. It is a large moated paddock where zebras and wildebeests seemingly roam free. Visitors feel part of the wild animal's domain. Landscape immersion.

A constructed mountain landscape for the algazels is located between the care centre and the savanna. The landscape design is by Buro Sant en Co; the structures by Onno Vlaanderen Architects. Between savanna and care centre you come across a bridge to the restaurant the Two Cheetahs constructed out of wood, glass, and stone and a "gorge" between the Doklaan and the quay.

Elephant and chalet-like giraffes stable situated on the former border of the garden are reconnected to the new walking route by transforming the back side into a sort of a second front. Thus the elephant stable is provided with a romantic red façade and a public entrance. The giraffe outdoor arena gets larger, a dry moat replacing the old fence.

A water filter installation is placed in a warehouse basement, from which purified canal water runs to the animal enclosures.

Butterfly greenhouse and lemur exhibit
October 4, 2006, marks the opening of a 1000 m2 large butterfly greenhouse where the Insectarium and a few greenhouses used to be. Land of the Lemurs follows two years later, an island where red ruffed lemurs and visitors potter around during the day. At night the bridge delivers a shock on contact (hotwire).

Animals aren’t always cooperative when it comes down to design concepts. The black-and-white ruffed lemurs - also chucked into Land of the lemurs - immediately go to war seeing a red one. Tryouts can bring out all the good, and all the bad. Shared accommodation is not an option.

Master plan 2005
When the parking lot goes underground, space is created for the last possible expansion of Artis, the master plan dictates. The predator gallery is to be demolished to connect to the Dokkade. The same plan includes the Geological Museum and Museum Micropia (creating awareness about the microbes) on the Knowledge Square. The Groote Museum of biodiversity on that same square also awaits a refurbishment. Ten years later, the time was there.

Cities and zoos are under everlasting construction.

In the Artis Square, the Museum Micropia and cafe/restaurant Plantage (above and next to the Members' Rooms with the black facade) is a blueprint for the renovation style change.

The 2010s
The monkey house, along with the birdhouse, has been restored drastically yet carefully. They are stripped down to the skeleton and equipped with a new foundation. The bird part now has three biotopes without bars.

Elephant enclosure 2017
After demolition of the predator gallery, the ground has been prepared for a herd of eight elephants. Thanks to a wind architect the boulders are positioned so that the animals can always stand out of the wind. The dark or light coloured boulders provide cool or warm spots. The animals can rub against the textured surfaces and the zookeepers hide food in the built-in shutters. Zoos apply his type of activation to divert bored animals: enrichment.

The deep pool filled with canal water has crude stair steps. Visitors get to watch as elephants swimming past their noses. An invisible underwater wall keeps the elephants in an inner ring, and thus away from the zoogoers. Water cannons provide showers that stimulate the elephants to go swimming. There is a drain, and a sloping floor in order to carry off manure.

Part of the old skeleton of the predator gallery (the truss bows) is reused in the roof near the café terrace.

Slider elephant enclosure from 2015 and further

Scientific zoo
In 1838 the Zoological Society Natura Artis Magistra is founded after the London model. It all starts smack down the middle of Amsterdam in the Plantage area, once a 17th-century garden suburb that had fallen victim to degradation halfway through the 19th century. Reassessment takes place by selling the more than 90 gardens to tenants. Artis obtains several gardens and manages to keep the style and atmosphere of an English landscape garden with monumental buildings, ponds and ornamental gardens intact. The old zoo is situated on the location of the petting zoo, next to the Artis Square which was given back to the municipality in 2014, a French-styled hidden gem in town, now. A ferry took visitors across the Nieuwe Prinsengracht which divided the zoo into two parts. Sailors secretly disembarked in the zoo. After buying the water Artis created the three ponds you see from the parrot lane behind the entrance.

Building the collection
The original collection of parrots, monkeys, and a Surinam wildcat suddenly turns into a zoo when Artis buys the menagerie of Cornelis van Aken. By doing this, the zoo expands with 200 animals for 30.000 guilders.

Artis members regularly bring animals or dead objects from the shipping trade. In 1855 the Groote museum was built for taxidermy, skeletons, and fossils. Dead objects move to universities and museums at the start of the last century.

Only around 1900, Artis zoo opens to the public.

1940-'45
During the war between 150 and 300 people are hiding in Artis, but the zoo does not have an underground shelter like zoo Warsaw. Firebombs hit the zoo in 1941. They were meant for the freight trains next to it.

Due to lack of space, the number of animal species has been reduced from 1100 in 1986 to 700 species in 2005. A decade onward, there are 900. Like every zoo, Artis needs sufficient top-ten animals. Tigers and elephants are such crowd magnets. Sometimes the choice boils down to an endangered species and another time to an animal with attraction value. Many of the big animal species disappear from view through a natural process. Hippo Tanja did not get a successor after her death, and same counts for the rehomed (polar) bears and big cats.

The decision to stay in this part of town is crucial.

Expansion 1997
After a long wait, the marshalling yard across the warehouses of the Entrepotdok is added to the then 10 acres sized zoo. The master plan "Tigers at the canal" by Artis and Onno Vlaanderen Architects BNA, is already at hand for this since back in 1989. Artis rises to the occasion of this expansion, by housing the animals thematically. 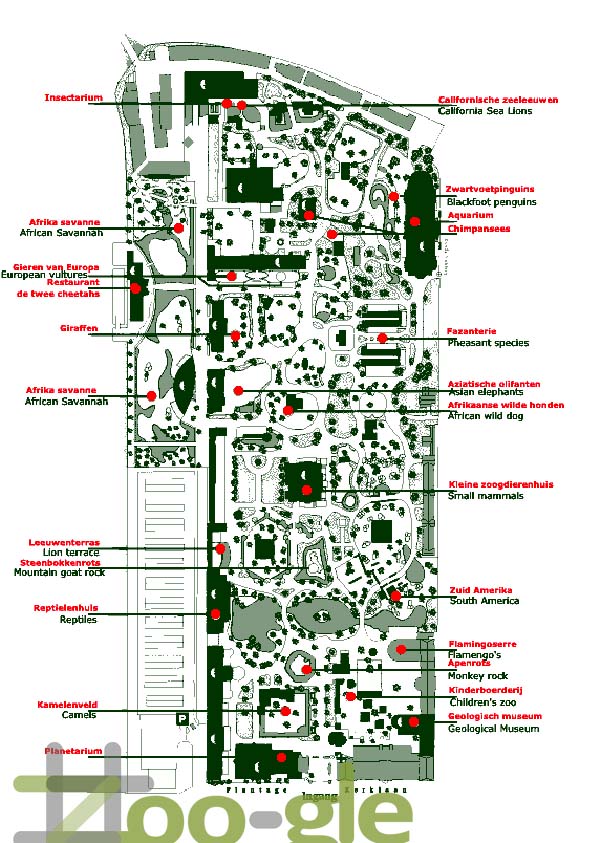 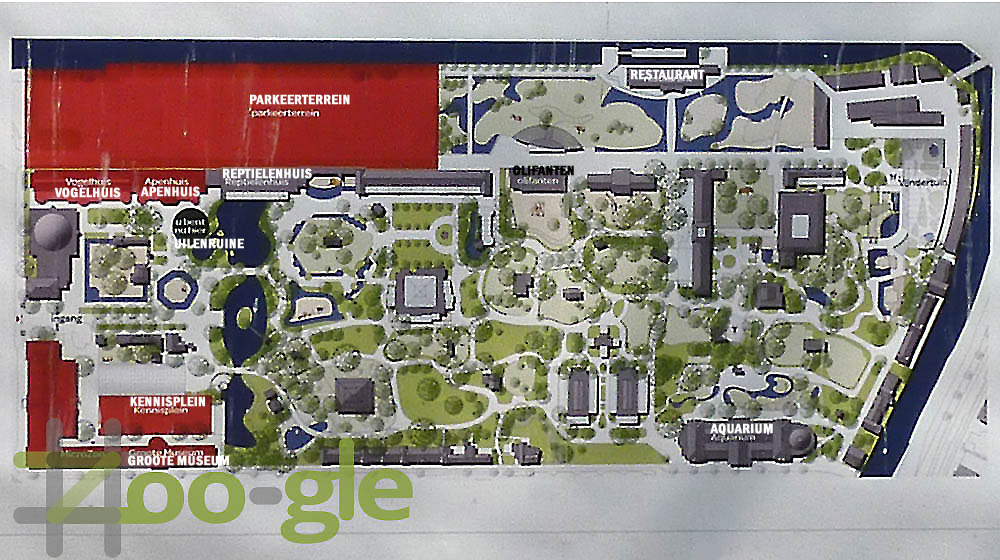 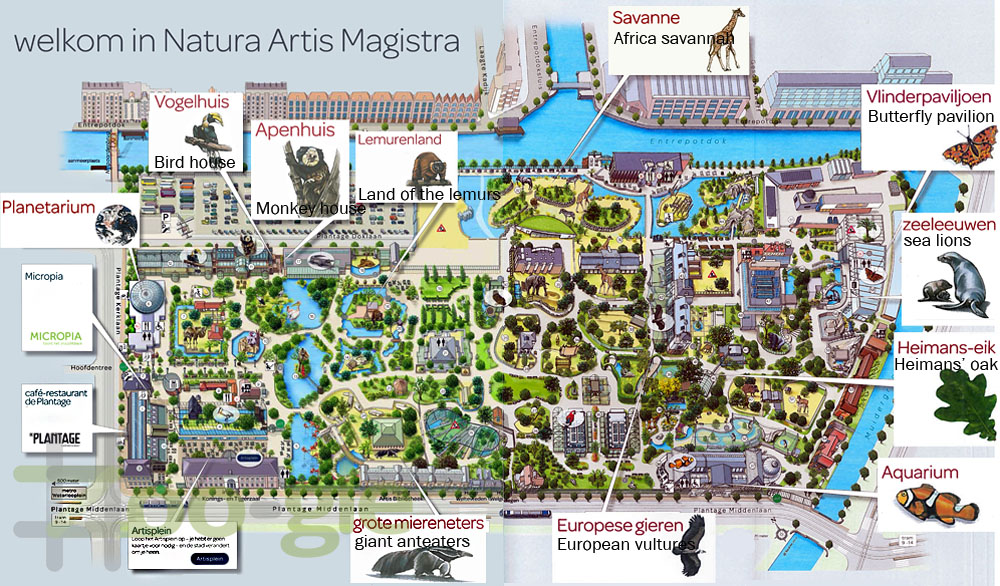