Most zoos start as a scientific zoo at that time, entertainment is the great intent in Rome, though. And who better to ask than the king of entertainment Carl Hagenbeck? With some money from the municipality in the back pocket, the society that founded the zoo ensured his supervision in 1909. After a glorious start, the zoo periodically gives the impression that much remains to be done.

Main entrance 1910
Two semicircular shapes arise at the new road between Villa Borghese and the 1930s neighborhood of Parioli, each featuring a round arch flanked by Roman columns topped with composite capitals. Elephant head on the keystone of the round arch. Protruding cornices and balustrades at the top. Sculptures of animals and animal trainers. Serving as the ticket office and the entrance the two volumes of masonry are placed symmetrically to the left and right of the large gate. On the left, you could read "giardino" and on the right "zoologico". The Roman Baroque style is criticized by the rationalism that became fashionable in the era fascista. The theatrical style of the architect appealed to Mussolini, though, who got him several design commissions until he fell out of favor again. Now, just like at the Moritz Lehmann gate in zoo Hamburg, you seem to be walking between two richly decorated bookends. A good composition.

Signature Carl Hagenbeck
Hagenbeck arrives in the company of his adviser, his son, and two other old acquaintances.

The landscape design is from the Italian gardener Giuseppe Roda.

Known for the fenceless zoo, animal training, the scenographic zoo panorama, and large meadows, Hagenbeck expects more of Rome zoo than of his own.

The excellent climate allows me to combine animals and vegetation in a way which is impossible for me here in the North.

Restaurant
In 1911, the restaurant was built along Via Ulisse Aldrovandi above the lake. The facades of most Hagenbeckian exhibits are oriented towards the restaurant which was an excellent focal point due to its higher location.

Hagenbeck exhibits
In Rome, the Hagenbeck team succeeded in displaying leopards in an outdoor enclosure for the first time. The row of four grotto exhibits for predators are landscaped with artificial rocks made by Urs Eggenschwyler and even vegetation. A Turkish-looking Reptile House gets outdoor cages and the indoor terrariums are designed like grottos just like in Hamburg. Enclosures like the Pachyderm House are placed close to the sides of the panorama. It was Hagenbeck's first Pachyderm House, industrial with an "ancient" wall partially obscured by vegetation and adorned with Egyptian looking decorations. There were doors to the five night-quarters in the facade of large square stones. Typically Hagenbeckish were the paddocks so that the elephants got physical exercise and fresh air, cutting-edge thenadays. Exuberant planting and a sophisticated sight line design plan. The polar bear enclosure was very scenographic and designed to be viewed from different points.

The Hagenbecks now
Gradually, Hagenbeck's plan appears to have changed and crumbled. Apparently, the herbivore grottos and some exotic "Hagenbecks" had a short life. Climatological issues have occurred relating on the one hand to unheated buildings, and, on the other, to a lack of shade. The polar bear enclosure facing south has now been refurbished for sea lions. The Giraffe House was built in Moorish style in 1926. In the 1970s, an attic floor replaces the metal green onion on the roof. Hagenbeck's Pachyderm House is considered outdated about 1935; you now see an enclosure from 1969. In 2001, the original ditch disappears at Hagenbeck's lion grotto and the animals get four times as much space. A wall of camouflage rocks with two 45 mm thick glass windows and information panels is placed in front of it.

There are many, many of these filters in the zoo.

Change of course: 1935
In 1935, the zoo expands considerably to 42 acres under the supervision of (landscape) architect Raffaele de Vico, who designed many parks and squares in Rome in the 1930s. The Vico goes on a study trip to the zoos of Munich and Leipzig.

Access Via giardino zoologico
Where Brasini puts two hollow walls opposite each other at the main entrance, De Vico starts the new part with two convex facades symmetrically next to the access arch above the stairs. The wings of a bird. The large aviary is centered behind the arch. In both entrances, you can read Roman Baroque.

Geodesic bird dome 1935
The geodesic dome was not well known in the 1930s. The spherical cantilevered construction is divided into triangles and can span a large surface. The great aviary in Rome is one. The enclosure is probably inspired by the free flight aviary by Bühring in Leipzig. After De Vico figured out that this shape causes the birds the least stress and is optimal for landing and taking off, he successfully has a lightweight metal structure fabricated. That's craftsmanship with a face!

Reptile House 19355
A striking, circular building whose interior resembles a cochlea wound like a spiral, whether that was the intention or not. Knowing that De Vico visited German zoos, you immediately recognize the influence of the elliptical elephant house by Von Seidl in Munich and of the aquarium façade by Käppler in Leipzig. Nowadays, the visitors' part can become overcrowded and cacophonic on a busy day.

Rome is a bit late with a zoo and opts for the most modern form within this trend. Hagenbeck provides the project plan, the director and animals. Imagine Roma Termini station on that November day in 1910 that 1000 animals including 3 elephants are arriving from Hamburg! Theodor Knottnerus-Meyer, the zoologist in Hamburg Stellingen, serves as the first director of the Giardino Zoologico.

Economic headwinds and no transport to the zoo made the zoo fail as early as 1915. The municipality of Rome comes to the rescue. The zoo flourishes again in the 1930s when Mussolini considered it a propaganda tool and donated lioness Italia and other animals. Architectural interventions are made to convert the restaurant into a zoological museum. In the early 1930s, Mussolini opened it along with the colonial museum that no longer exists but was deliberately moved to the zoo.

The national zoo as a showcase of the greatness of Italy and its colonies.

Around WWII, the zoo has beginning to run into financial trouble. The Olympic Games 1960 represents an effort to renovate or refurbish the zoo, but the overall condition of the zoo was poor. In 1970, the Reptile House closes its doors for renovation, to reopen in 1983.

Change of course: 1997
In 1997, the zoo becomes Bioparco di Roma, a botanical zoo focused on education and research, fewer animal species and more spacious enclosures resembling the real habitats. The idea of ​​the biopark is elaborated in a 1997 master plan.

The Hagenbeck polar-themed area is in an obvious state of disrepair. Carl Hagenbeck has designed a kind of polar area, including penguins, seals, sea lions and polar bears.

Anyway, no “polar animals” in 2005. Hagenbeck also loosely showcases African animals intermingled with Asian animals. The geographical configuration principle has not been introduced yet in those days.

The onion, the dome, on Hagenbeck's giraffe house has been lost over time.

Nice old pictures hanging in the restaurant and elsewhere in zoo Rome. The overall impression is that much remains to be done.

Where zoo Vincennes shows how well filters can work, they obstruct the sight lines in Rome. Parts of the zoo are not accessible and bye-bye scenography of Hagenbeck. You come across all kinds of things in front of the enclosures, an information wall, a grove of trees, a playground, a wall placed in front of a wall. The Ikea route Reptile House got more visual emphasis. Signage and extra showcases, so be it, but loud colours and reverberation to cap it off....

You see what the zoo is doing, sometimes it turns out to be ok-ish and sometimes the new infotainment style clashes with the historic charm that is already faded glory.

It is still a fun treasure hunt, though. What is still standing and what is new? Peacocks still wandering the area. And De Vico's garden remains masterful.

The old predator gallery of Hagenbeck can no longer be seen. I noticed Rerum Romanarum reposted zoo-gle pictures of this big cat gallery and the polar bear enclosure without giving credit. Of course, they know you don't crop out the watermark and you do give a link back. Baaaaad internet behaviour.

In May 2019 a newspaper reports that the zoo may have to close. The municipality seems to resolve the money matter. 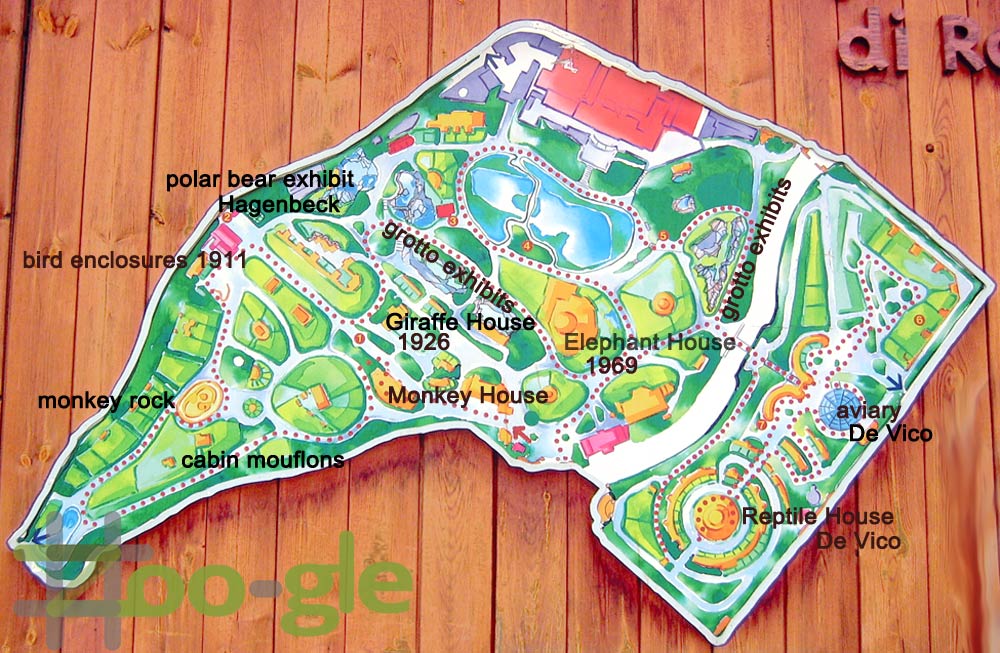 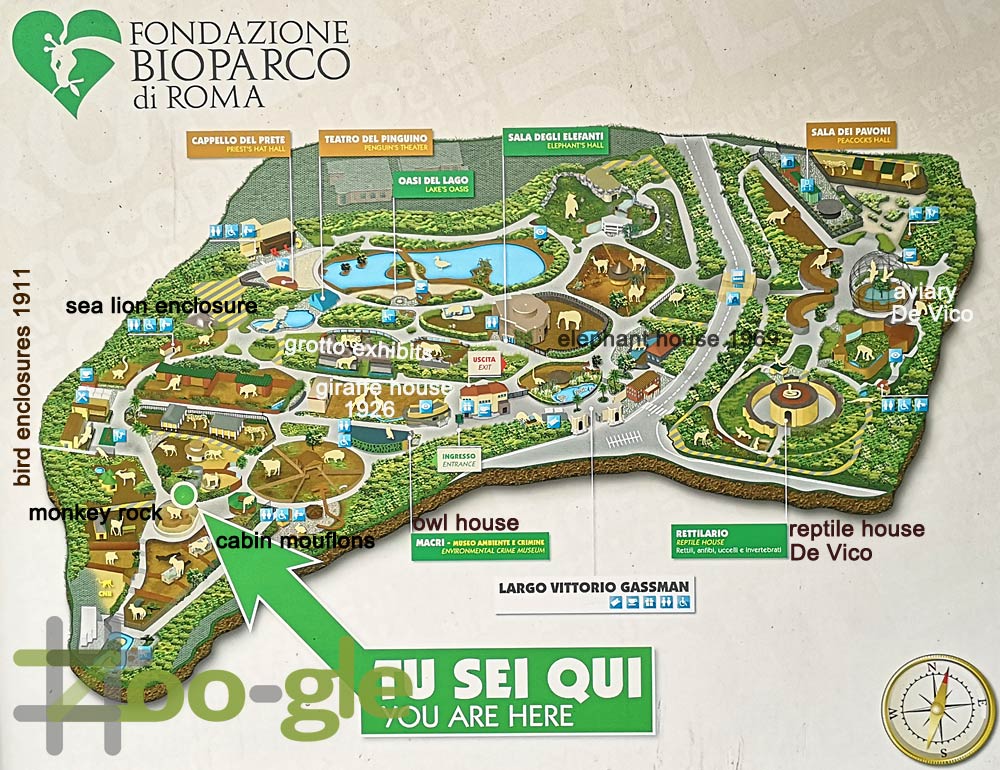