A zoo defined by one architect, one who knew what he was doing must be an absolute hit. About a hidden gem in Naples.

The design dates from 1939, the fascist period commonly associated with state architecture and elements of the Roman period or of rationalism and modernism. You will not stumble upon megalomaniac architecture, here. You do see the geometry, asymmetry, modern technology, solid materials, arches, and columns, though. The design is in the hands of Luigi Piccinato (1899-1983), top architect and urban planner. He is not only the architect for all the animal enclosures but also takes care of the vegetation (we notice palms), paving (we notice tuff stone), pipes, stairs, lighting, everything. Retaining walls to compensate for differences in ground level and for stabilizing landslides as the zoo is located in the shadow of Vesuvius. All pre-war buildings are listed structures, now.

Organization of the garden
Piccinato organizes a beautiful rectangular garden. From the entrance (a detached high porch, almost a colonnade of Vesuvius stone with a reinforced concrete roof plate is placed perpendicular to the service building) the garden is going up in a terraced form. He makes maximum use of the relief in the landscape, the "orography". As a result, the panoramic terraces catch a lot of light having a cool Mediterranean vibe. Botanical, too. A central lake with a restaurant and a large terrace is present. From the entrance, you went straight between the lake on the right and the Pachyderm House on the left. Around the bend, a sizeable predator department filled the entire corner. Then you were walking north. Piccinato leads everyone along paths and stairs so that no one had to miss any enclosure.

Pachyderm House (1940)
The ground plan looks like a three-leaved clover, each leaf a garden with a swimming pool intended for one kind of pachyderm: elephant, hippo or rhino. In the heart a geometric, square, tuff animal enclosure. The masonry on the outside is painted on it, faux. Each side has eight or six pilasters and has a large opening exactly on the axes of the building. Three for the animals and one for the staff. The roof has the shape of two horizontal half-barrels that intersect: a cross vault. Outside you see this as white plastered semicircles with five round holes with the beautiful name of oculi (eyes). During the renovation that started in 2014, modernization took place and the three outer areas were merged.

The grand bird of prey aviary
The accommodation measures 24.5 meters in width and you see metal mesh parts held together by four huge brackets looking like concrete shelf carriers standing 8 meters apart. At the rear, cross beams reinforce the construction and at the top, the brackets go diagonally up to the front. The front (14m) is, therefore, higher than the rear (12m). Because of the visible bearing construction, the material, and the blunt corners, the aviary reads as rationalistic architecture. The interior includes a water feature and a tower of decorative boulders.

Lion enclosure
The two-part outdoor enclosure with an asymmetrical structure features a wall and water at the front. The wall makes a horizontal V between the two halves, which is closed off at the top by a rectangular interior enclosure with four cages, behind the terraces. Characteristic is the rough concrete and the rounded corners, the latter even on the steps of the canal staircase. The terraces are theatre stages for the lions and on a column of raw concrete is another column with composite capital, exactly according to the design.

Reptile pavilion and moated monkey enclosure
Monkey and reptile enclosures are built on the east side. The reptile pavilion has a half arched roof. Inside, an almost 20-meter path runs through the middle, flanked by pillars on the side of the arched roof. Through half-height glass panels, you see an open space for alligators featuring a water basin and plants under the translucent arched roof. The smaller spaces across the path have windows and artificial light. Behind these enclosures a service room.

The oval-shaped monkey enclosure has a semi-major axis of around 30 meters. In addition to rocks and climbing trees for the monkeys, Piccinato also designed a mobile bridge. The north side is shaded on the outside with semicircular white steps as in an arena. After 1950 the original enclosure must have been adapted for non-African(!) animals (bears and seals).

Strada Romana
Parallel to the Via Terracina used to be the Via Puteolana linking Roman Naples to Pozzuoli. A part of this old Roman road lies between the tiger quarters and the savannah.

The colonial exhibition venue La Mostra Oltremare was built in 1937-40 for the glory of Italy's overseas empire. Already in 1940, before final completion, the City of the Empire is suffering due to war and destruction. In the 1950s and 60s, it was finished but then for business purposes.

This originally fascist project also included a 9 to 10-hectare zoo for African animals from the Italian colonies. Not long after its opening in May 1940, the Naples Zoo closed down to reopen on 25 October 1950, in the Fuorigrotto district.

After the 1980 earthquake, the Department of Zoology installed a research station at the zoo focused on changes in animal behaviour before earthquakes. The library was housed in Villa Leonetti, a 19th-century building in the zoo.

In 2003, the zoo closes for financial reasons. After reopening in 2004 under the guidance of the neighbouring amusement park Edenlandia the zoo and Edenlandia turn out not to be a match made in heaven, in 2011. The zoo stares into the abyss again... Until Francesco Floro Flores, an entrepreneur in technical innovation sees the deplorable state of the zoo on TV. It touches his heart and he takes an intervention. The land is from the Ente Mostra d'Oltremare, but from October 2013 Flores is president.

Under the watchful eye of Naples and the Environment Committee, he initiates restoration of pipes and cables, greenery, infrastructure, and buildings. The biopark (for that is what it is now) has a flying start with the restoration of the entrance. A few years and €3 million later, the strip of farm animals is once again clean and educative, just like the Reptile House after years of vacancy. Work has been done on the elephant enclosure and the lake, too. By the end of 2015, the new tiger enclosure has been completed. The Strada Romana must have been discovered during that project.

What a paradise. Make sure you reach the Edenlandia station, by the way! Immediately a hilarious moment at the Elephant House. Who was the architect, I ask someone who works here. "Io!" "Me!" and he shows how he paints the faux masonry on the outer walls. Priceless.

Piccinato knew what he was doing and it can be seen his zoo is being restored with respect. The original layout is quite recognizable, the edges might have changed a bit. On the south side, a strip of farm animals and on the high north side the savannah paralleled by a modern tiger enclosure fitting nicely in the width of the zoo area. A pseudo-Sumatran habitat. No more water at the lion's quarters, the ditch is extra walking space for the animals, now. Beautiful walls, shapes, masonry, pilasters, benches with animal feet... The reptile house also has a strong design. Simple and effective. Glad I was so quickly talked into visiting Naples. Perfect day! 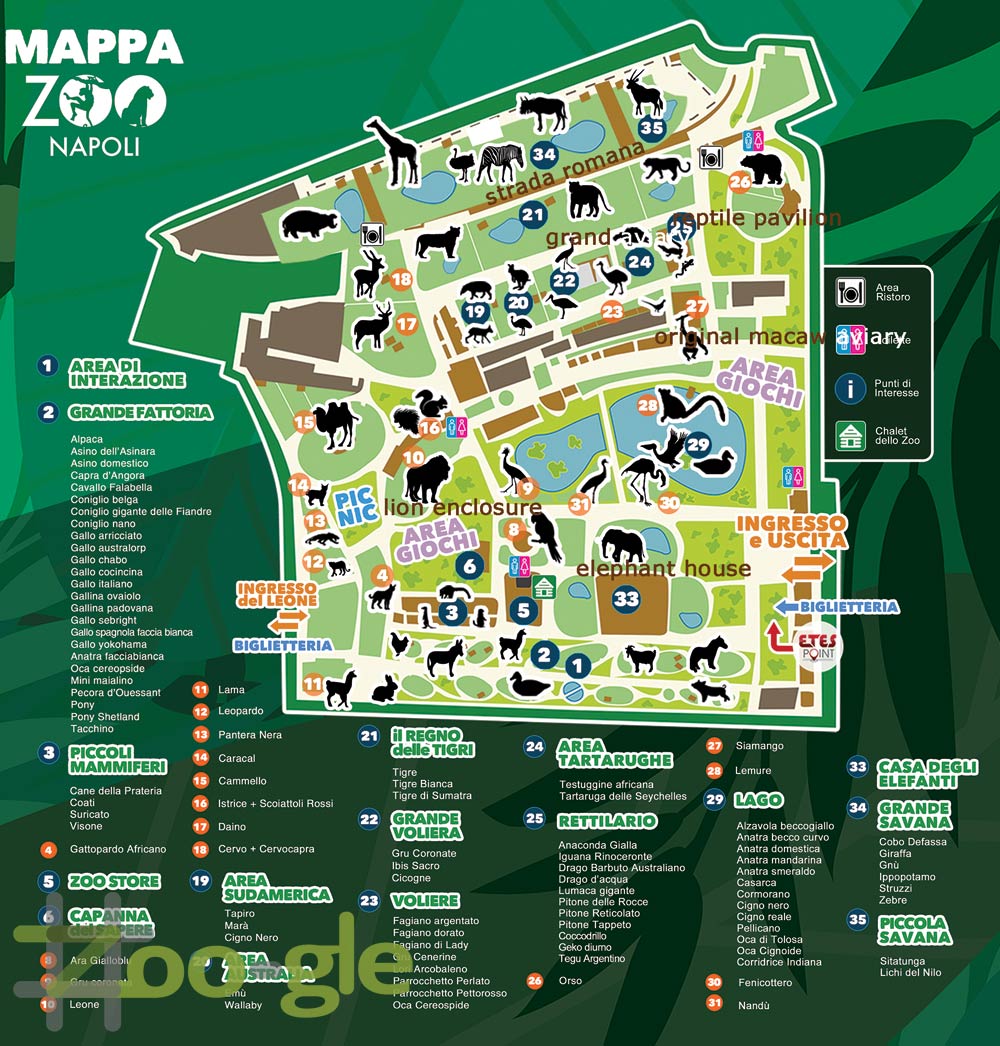