There is a 19th-century zoo with the same name as the island on which it is located, east of the centre of Helsinki. The best thing is to go there by water.

Restaurant Pukki 1884
All paths lead to Pukki that should look great at evening lighting. The wooden park villa in the middle of the zoo is designed by Theodor Höijer leading Finnish architect in the late 19th century and known from the Ateneum building and the fire station in Helsinki. Pukki was originally built as a restaurant and still is. The listed building is older than the zoo. The realistic bronze goat in front comes from the Paris World Fair 1889 and was donated to the city of Helsinki in 1892.

The old walls of the other restaurants have been preserved while the interior spaces were modernized. The old guardhouse turned into the Hedvig Cafe, in 2006

Waiting Pavillion 1887
Standing on a stone elevation the old timber waiting pavilion at the quay serves as a candy store during the summer season.

Bear castles
The original three bear enclosures including the one for polar bears (1914) next to the harbor still remain but are no longer used. The bear castles (1903 and 1905) next to Borealia and Amazonia are enveloped in Finnish national-romantic architecture. On both sides outdoor spaces and the brick part on the backside serving as an indoor quarter.

Zoo Dublin has a meerkat exhibit in The Meerkat restaurant, in Helsinki, people have lunch opposite the bear castle completed in the Olympic year 1952. Separated by glass panels, humans and bears share the same sea view. The spacious rocky enclosure on a slope features a monochrome back wall and open cave-like hiding places. A mix of real and fake rock. Visitors view the bears directly from above or through the glass. The enclosure is located on the sloping side of a large pit providing an unobstructed view from the other side. As with the bharal cliff, some rock surfaces appear rounded.

Lion Castle 1935
The lion castle behind the steep bharal cliff is the present apinalinna, monkey castle. The enclosure with white walls retaining heat consists mainly of the rocky southwestern slope on which it is built catching a lot of wind. Visitors walk past the windows or can sit on a bench. In front of mirrors hanging next to the windows, they can mimic facial expressions. A staircase leads up to a platform offering a different viewpoint.

But to return to the lions, in 1962 the first cat valley was completed.

Lookout tower 2002
The tower was conceived and created by architecture students from the TU Helsinki. It had to be 10 meters high and made out of wood. The winning design - it was a competition - follows the lines of an existing stone wall and some birches on the windy southwest coast on top of the 18-meter high bharal rock. When passing by boat you notice how high that is. The two-story tower combines a clean green design and an irregular shape. The stairs are across from a steel-framed opening. The exterior consists of 72 curved slats and 600 bolt connections. The Bubble, I'd say Barbapapa, is placed on a sunken concrete foundation.

The winning project plan includes landscaping, greenhouses, auditorium, nocturama, reception, technical room and restaurant. Enough work for 10 years. The historic structures and large trees are to be incorporated appropriately and at minimal costs.

The French architects put geography above architecture larding the zoo with visitor experience. Aldric Beckmann speaks of "...creating a fake topography as a flirt between architecture and landscape". Island, nature and improvement of the living spaces for animals where visitors are guests get the focus. The architects also had this guest concept in mind at Zoo Vincennes. The vegetation has been compacted. The zoo has a main road and non-signposted secondary paths. Last but not least a glass-domed entrance and a polar bear enclosure are proposed.

Before it transformed into a zoo, the island Korkeasaari was a fishing spot, grazing land, wood storage, and in the Crimean War military area. From 1864 steamboats service the archipelago around Helsinki. In 1883, it becomes a people's park for the elevation of the working class to the design of architect Höijer and city gardener Jernström. So the island turns into a park with paths and plants. A restaurant (Höijer 1884), pier, toilet, scenic viewpoint, swimming pool, waiting room (Decker 1887), skittle alley (Mieritz 1888), and a laundry room (Decker) are added. In 1889 the zoo opens with mainly Finnish animals and the municipality of Helsinki as owner. Until 1974, one reached the island by crossing over ice from the mainland in winter. In 2004, the Helsinki Bridge (1974) was replaced by the current 300-meter bridge.

Meetup with the son in Helsinki and going to the zoo the old fashioned way? Check. The entrance with everything that is needed to run a zoo should be the new face. On a grey morning, this visual identity is still a bit thin. A €100 million had been budgeted but uh... no covered passage, no arctic area with polar bears. Most animals here adapt easily to a cold climate, only a few grazing artworks venturing in their enclosures. The Unique Selling Point is being an island though, come rain or come shine. No traffic noise, here! Recreation areas along the coast. Wood and greenery to blend the metal fences into the landscape. The same vegetation type inside and outside the outdoor enclosure to reinforce a natural appearance. It looks so natural that I did not expect to see fake rocks. A tent-like net for the sea eagles. High platforms for the cats. On the way back we take the ferry to the center of Helsinki. Later as we passed by again by boat we got an even nicer view of the lookout tower, the goats on the steep cliffs, and the former Marine Museum on the smaller island Hylkysaari. 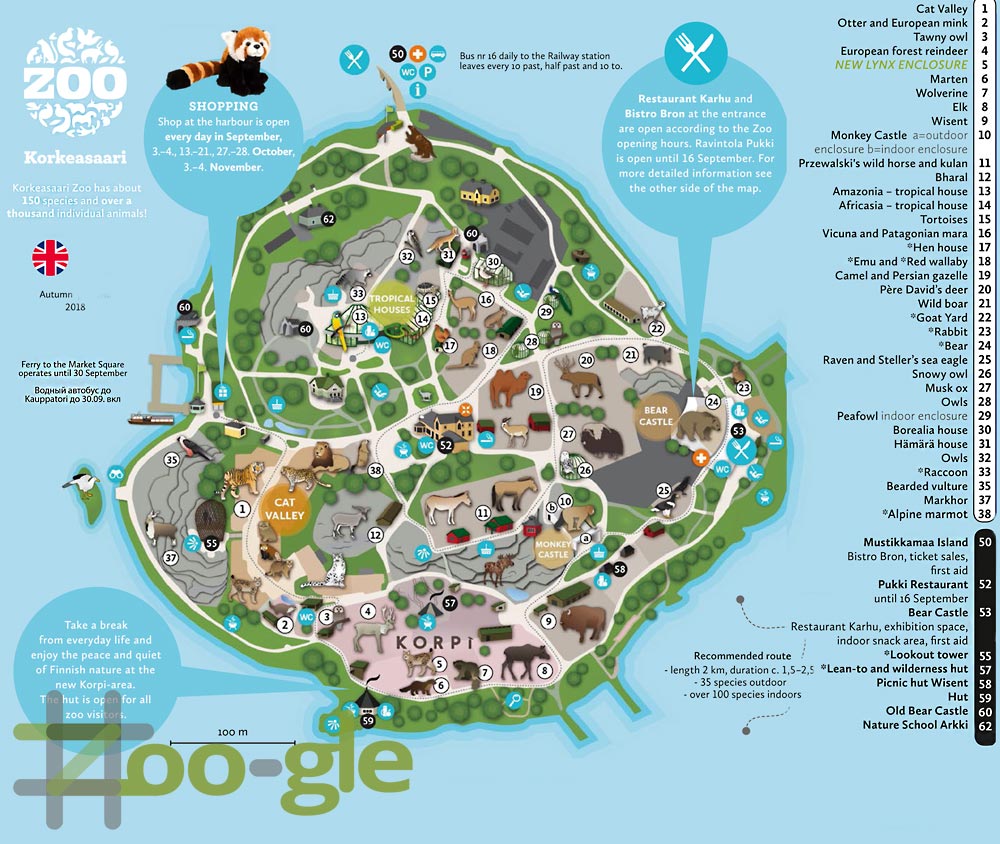 TN Plus, Renovation of the Korkeasaari ZOO