The Westphalian Zoological Garden in Münster is known as the Allwetterzoo, for the main enclosures can be reached by a covered walkway in any weather.

Concrete zoo
The new zoo is located a few kilometers from the old site (1875), five times larger and showcasing the same animals in a completely concrete zoo. Particularly in the early phase, the typical seventies concrete enclosures without much vegetation must have looked very modern. From the outset, the concrete has been criticized, and the zoo has used wooden paneling and fast-growing green in response. 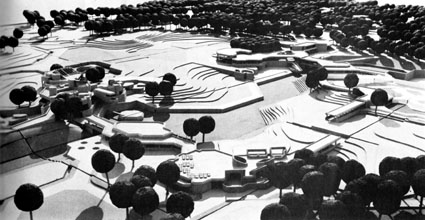 Covered walkway
A roof on concrete poles protects the visitors from the sun and the rain. The zoo has 2.5mi (4,5km) of footpath in total; there is a (longer) outdoor path, too.

Intimate feel
This zoo is also doing its best to create an intimate feel between humans and animals: just a piece of glass away from an amur tiger. Furthermore, visitors may feed the elephants and some other animals.

At home with the Colobus monkeys
The green vegetation in the outdoor area (1999) provides some shade and a hiding place in the enclosure. The Colobus monkeys can even eat it. Visitors enter the monkey island on a steel grate bridge. A walkthrough enclosure. Colobus Monkeys do not like metal grid and remain on the island. The hotwire in the bridge railings is activated at night.

Glass
The zoo-planners have placed African white rhinos and Asian elephants together in a pachyderm house. The meerkats can see the rhinoceroses through the glass and visitors can observe the meerkats through many glass panels.

On May 2, 1974, architect Bernd Kösters hands the keys to the new zoo over to chimpanzees Max and Moritz who, in turn, pass them on to managing director Helmut Reichling. The new Westphalian Zoological Garden attracts 50,000 visitors on its opening day.

Concept of the zoo
The emphasis is on surroundings that mimic the animals natural homes as closely as possible and on bringing visitors as close to the animals as possible.

A lack of initial orientation occurred. The map at the entrance was hanging on the wrong side and the whole trail around the park was incidentally not what you'd call intuitive. The meerkat exhibit is seemingly integrated in the white rhino enclosure, designed in the colors of the meerkats themselves, with stones, sand and woodchips. And glass. 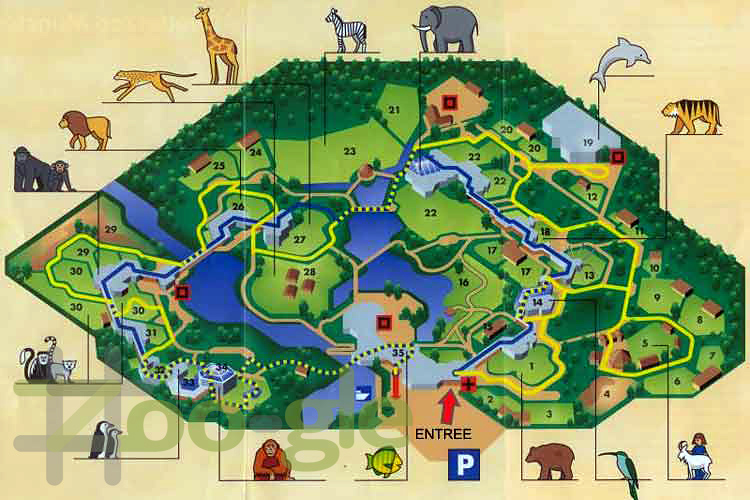