The historic architectural core after you come through the main entrance is called the Gründer Garten, the Founder’s Garden.

Aquarium and terrarium
City architect Anton Käppler is commissioned by zoo director Gebbing to design the Aquarium. Built in the Wilhelminian style it opens May 15, 1910. In 1913 opens the Terrarium, constructed as an annex to the Aquarium. In 1992, the Aquarium undergoes a renovation and extension and in 1997 the Terrarium is updated to meet modern demands. The appealing facade has been saved to this day, though. The "Zoo of the Future" concept also preserves the monumental building in its present form.

Bear castle
The Bärenburg, marks the end of a path. This bear castle, constructed in 1929, is built in the neoclassical brick style with six 10m heightened towers as designed by Carl James Bühring. The walls are marked with "1929" and the initials of Bühring and zoo director J. Gebbing. Four-metre wide moats separate animals from spectators.

The zoo has turned the historic bear enclosure into a children’s adventure playground, now.

Elephant house 1926
This structure is another nice example of the brick expressionism.

Zoo of the future
Implementation of Rasbachs master plan 2000-2020 takes place in different stages. Some highlights:

The thematic area features emotional journeys like a tree top walk, an (automated) boat ride, multimedia and an Asian restaurant. The concept resembles Jungola Emmen Wildlands.
An extra zoo entrance as well as conference services have been added to Gondwana. The distinctive arched roof spans 160m and is 40m high in the middle.
Its geometric shell-form creates perspective and fits in the visual hierarchy around. Price tag: €50 million.

Ernst Pinkert
Since 1876, entrepreneur Ernst Pinkert exhibits exotic animals near restaurant Zum Pfaffendorfer Hof, together with Carl Hagenbeck, another entrepreneur and the founder of the Hamburg zoo. On June 9, 1878, Pinkert establishes the Leipzig zoo on a one-hectare plot as a privately owned zoo in the former estate of Pfaffendorf. In 1883, the zoo area expands to 3 hectares. On January 1, 1899, the private company transforms into the limited company the Zoologischer Garten zu Leipzig. The predator house, the monkey house, and the administrative building are constructed in 1900/01. In 1907 the total area of the zoo is 7 hectares (17 acres).

People shows
On the Völkerwiese between the predator house and the seal basin, the Leipzig zoo presents until 1931, about 40 people shows, mainly "noble savages" from the German colonies.

Johannes Gebbing
Upon Pinkert's death, Johannes Gebbing takes over his duties, from 1909 until 1934. May 2010, Gebbing opens the Aquarium, which has been extended with a Terrarium in 1913. After the breakout of World War I, many zoo workers including Gebbing are drafted for the army. In 1920 after WWI, the zoo is taken over by the city of Leipzig. During Gebbing’s period of appointment, the elephant house (1926) and the bear castle (1929) are born. After the war, he assists his successor, Karl Max Schneider (1934-1955).

Master Plan Rasbach
As the 20th century closes, the Leipzig zoo either has to break down the old facilities like the carnivore house or future-proof them. "Zoo of the Future", the Master Plan (2000-2020) by Peter Rasbach takes the zoo to the next level with six new thematic areas, each thematic area its own in situ conservation project, immersion exhibits, and alignment with customers’ needs and emotions.

Behind the entrance near the statue The Athlete by Max Klinger some lifesize cardboard cutouts in 19th-century clothing on the occasion of the 100 year anniversary of the Aquarium.

They say btw that Gebbing’s heirs are claiming back the ownership of the sculptures that he placed in the zoo.

At the Aquarium we particularly like the hand-crafted details inside and on the facades. More eye candy: the weather vanes installed on top of the monkey and predator houses, the tags on the wall of the bear castle in brick expressionism, and the calm Wilhelminian-style buildings. The exterior of the deer house has been restored as a monument. The historic outdoor lion enclosures and the bear castle are unoccupied.

The Leipzig zoo is halfway through its work-in-progress 20-year master plan in order to add a modern feel to the old look. 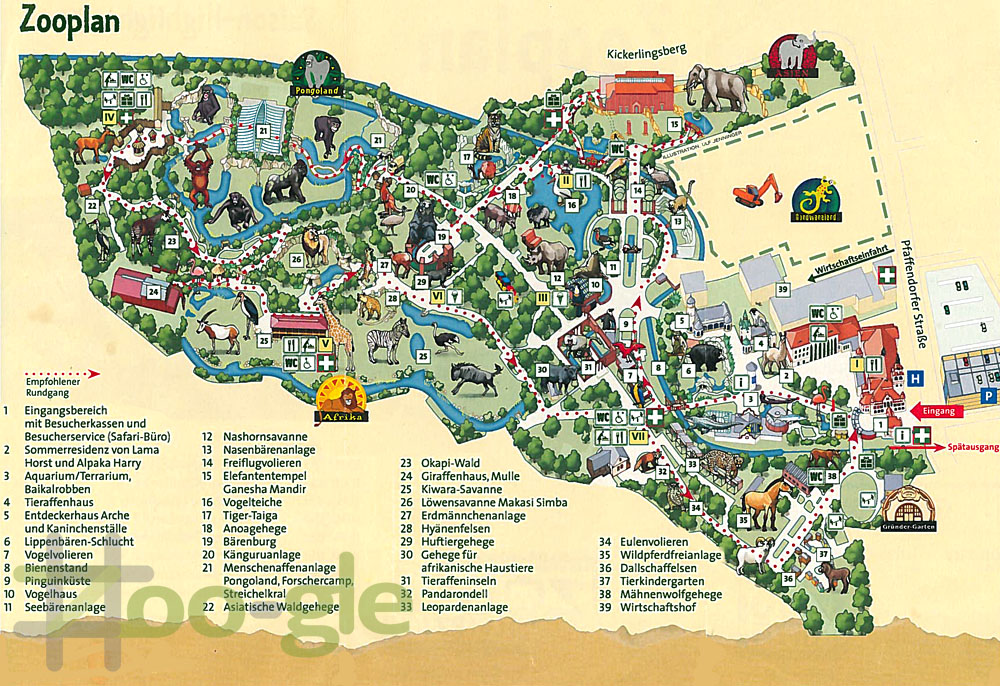 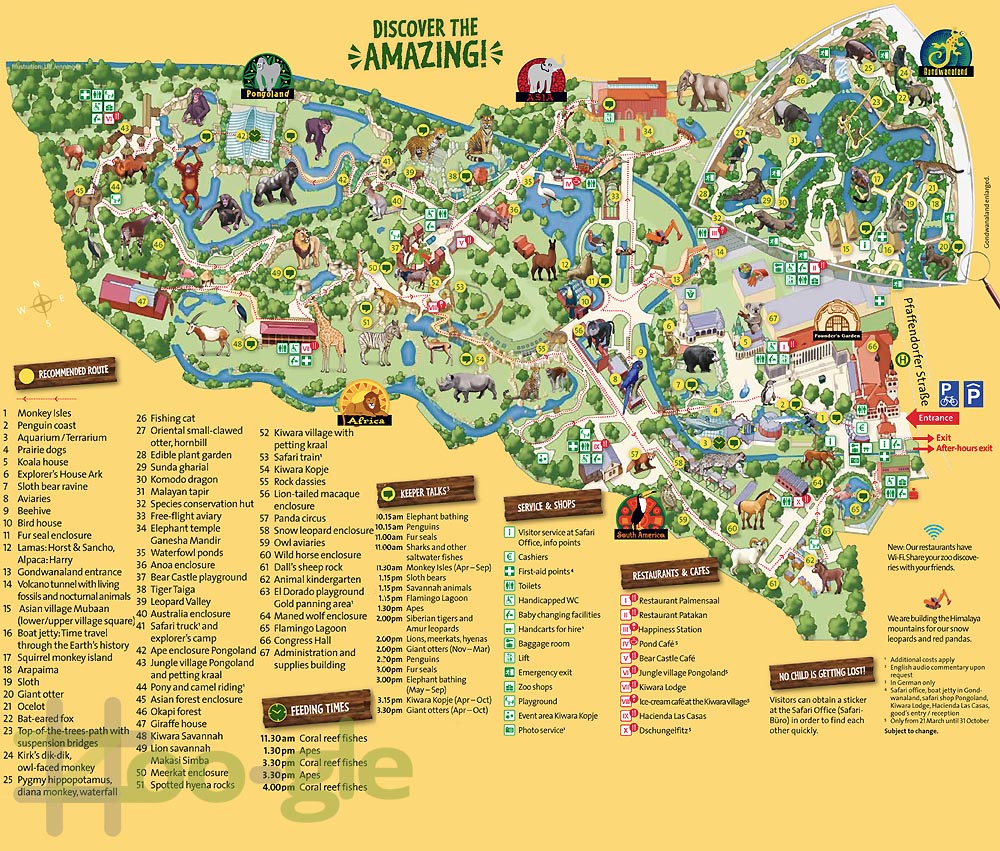 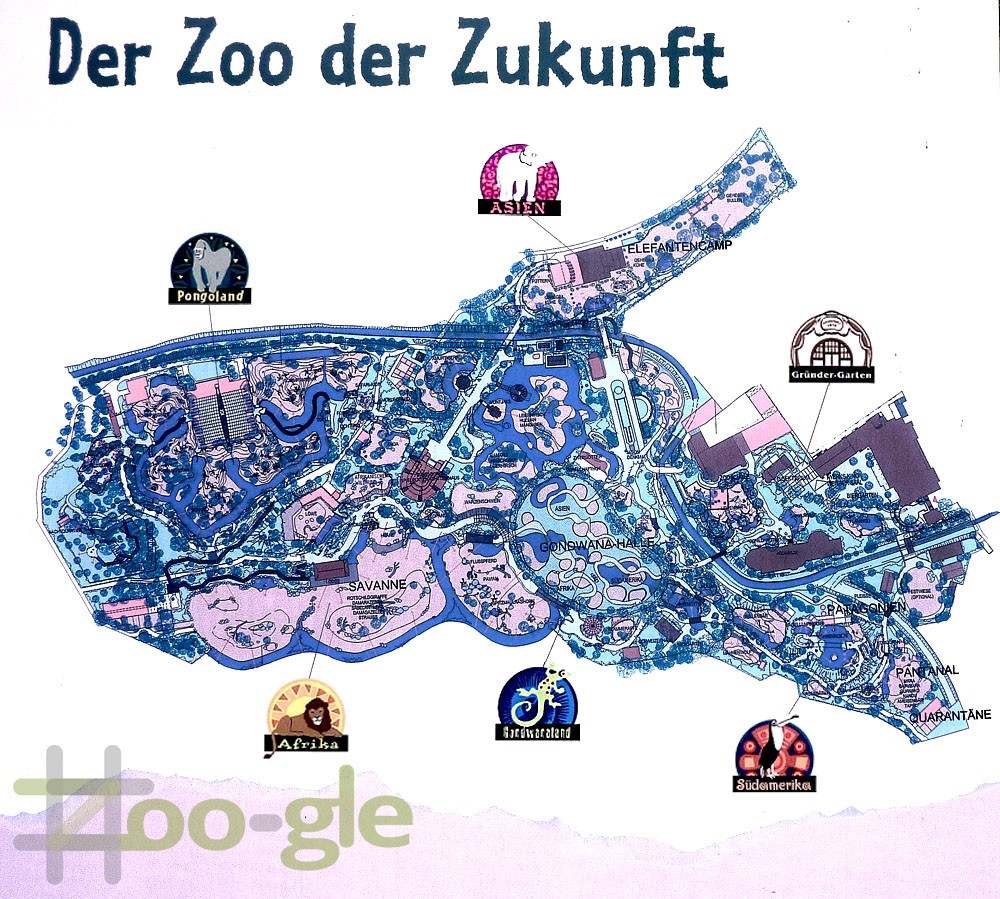