Erlebnis zoo Hanover is located in the city center to the west of the Eilenriede Park. This 19th-century zoo has been boldly converted into a modern leisure zoo distributed in immersive themed areas. The enclosures are carefully built to imitate the natural habitats of the animals. The zoo states: "We take visitors on a journey. They will experience something that begins with the sung line Adventure zoo Hanover through the speakers at the entrance, and ends with a good meal at the restaurant..." The entrance materials are not a 60 mil renovation, by the way.

The old 19th-century zoo
Germany's sixth old zoo comprised artificial mountains, a bear castle, a bird of prey enclosure, an aquarium and grottos for predators. Moments later grottos are disapproved of enclosures, though. In 1881, an elephant house has been erected and in 1892, the exotic antelope enclosure.

Second half 20th century
The zoo is expanded to 54 acres and functional structures made of iron and concrete arise.

Zoo Hannovers moat system introduced by Lothar Dittrich in the 1960s is being multiplied througout the world. Antelopes respect 1,9 meters (about 6 feet) wide ditches as their territorial boundaries. Only when in trouble, they might jump over. Zoo Hannover kept different species of antelope in the 1960s/70s.

From classic zoo to Adventure Park
Long before the opening of the EXPO 2000 in Hanover, the conversion project of the existing zoo into an adventure zoo has been notified. The Gorilla Mountain is completed in 1996. Architect HJW+partner has developed the 5-acre area around a former landfill, in 5 months for 3 million German marks. The project includes an evolution pathway showing the history of ape and mankind as well as enclosures for gorillas and gibbons. An exhibition in a research cabin and a windowed cave viewing area for the gorilla habitat, are part of the design. Prefabricated reinforced concrete and concrete poured in situ have been used for the construction.

The names of the other thematic areas speak for themselves: Jungle Palace, Meyers Farm, Zambesi, Mullewapp, Outback and Yukon Bay.

Meyers Hof
Seven Lower Saxon farm buildings have been moved to zoo Hannover and are home to native animals and the zoo school.

Yukon Bay
In 2007 a scale model offers a preview of the fifth world region. The construction of this Canadian-themed area with nordic animals is completed in 2010 after more than eight years. Yukon Bay is a small gold mining town where Captain Charters' ship with a colony of penguins onboard stranded. In the end he has started a penguin zoo in this nordic area.

In zoo Hanover, landscape architect Dan Pearlman makes the impossible combination of polar bears and penguins possible through this flash of inspiration.

Yukon Bay comprises ~14 different structures of different materials, panoramic windows and a number of clever solutions, such as a cart rail system also serving as a barrier for the polar bear enclosure.

As late as the mid-nineteenth century, it was still questionable whether Hanover was important enough to have its own zoo, but in 1865 a 7,4-acre zoo launched anyhow in Eilenriede.

Völkerschauen
By the end of the century, Hannover is having a special animal collection, but the most popular were the Völkerschau. In such a Peoples Show, people from distant parts of the world were brought to be exhibited in the zoo. The human zoo.

World Wars
Many of the Hannover zoo animals died in World War I. In 1920, the zoo has been taken over by the city but was forced to close down in 1922. In the same year, it reopens thanks to animal trader Hermann Ruhe senior. The animals he bought for zoo Hamburg were temporarily displayed in zoo Hannover in naturalistic habitats made for this purpose. During the economic depression, the trade in animals became more and more difficult. At the end of the World War II, the zoo was almost completely destroyed.

African savannah and Zambezi river
In 12-acre Africa, visitors hop on the Zambezi riverboat that is being pulled with underwater cables and glide along native animals in home landscapes. Besides water, there are no visible barriers between humans and animals. For example, hippos are exhibited behind glass.

There is also the discovery trail which starts in mainland Africa and leads through, in 2007 almost five themed areas. The path is overgrown on both sides until it ends up in an animal enclosure or a square. Each line of sight, everything you see, seems to be directed this way. Unlike any other zoo, we've ever seen before.

Indian jungle palace
The Indian jungle palace looks like an abandoned residence and is hosting elephants, tigers, panthers and gray langurs. Tibetan prayer flags are hanging over the main square where you find a - not typical Indian - wok restaurant. 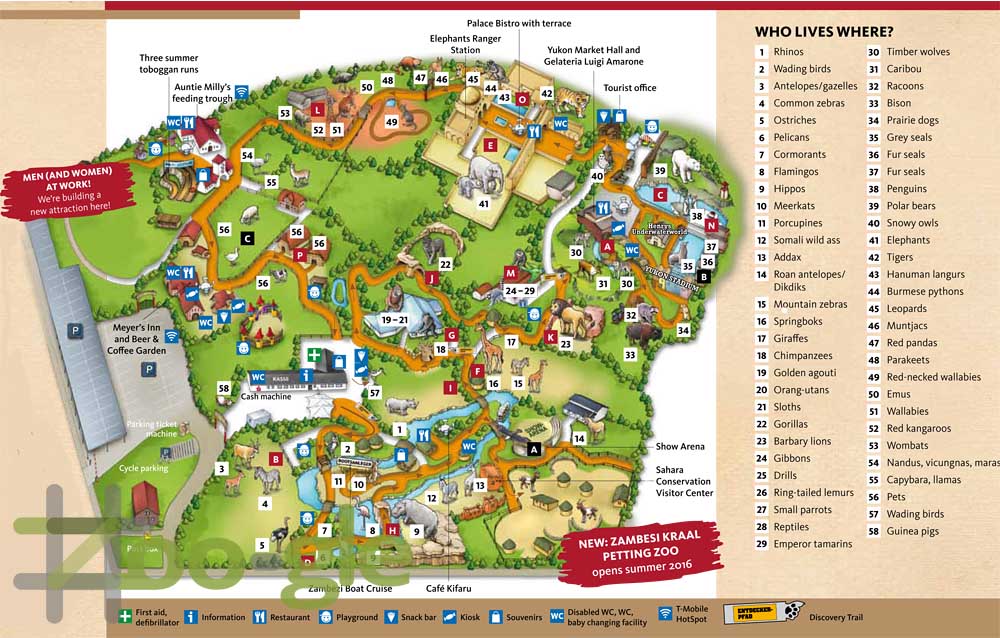