Frankfurt is home to the second oldest zoo in Germany. In addition to the old part of the open-air museum type, the garden offers recognizable architecture from the 1960s and 70s and modern design.

Arrival and bearland 2013
The spacious subway station near the zoo has an open ceiling architecture and painted animals on the walls. The takeaway is clear: get ready for visiting the animal kingdom. And we know immediately that Frankfurt perceives itself as Ark of Noah. Soon you see the building of the Zoological Society House (1876) by Durm, Kaysser, Lindheimers. Late-classical and a pinch of Italian Renaissance.

Compared to this monumental monolith the entrance is kept modest. Red bricks against the zoo ring wall. A contemporary foyer with a ticket counter, shop, office and a fully glazed wall. Even before you got your ticket you can see monkeys in the shop window. Fake rocks represent a tree stump. Designed in 2009 and completed in 2013.

The same architects design the monkey and bearland Ukumari behind the entrance. This three-part enclosure is green with steep walls, gorges, and scrubland. The old bear enclosure was overhauled for it. The architects play with us with high walls and vistas. Just like on the forecourt, existing trees are integrated into the image. The approach route to Ukumari shows how the zoo reinvented itself in the 21st century.

Exotarium (1877, 1957)
The aquarium opens with 12 saltwater, 2 freshwater aquariums, and some terrariums. The romantic castle-style structure is sunk into an artificial hill at the lake to insulate the walls and keep the water at the right temperature. Tanks filled with groundwater in the water tower ensure a continuous supply of water. To cover the costs there is a separate entry fee for the enclosure for 100 years. The counter can still be clearly seen under the canopy. In 1904, a reptile greenhouse with a glass roof and heaters opened on top of the aquarium. In 1944, bombs also hit the aquarium.

A tropical crocodile swamp is completed in 1952. During the reconstruction, the water tower loses its castle-like appearance. A hall featuring a rainforest and a polar area for penguins is added. In 1954, three years before the official reopening, the name Aquarium changes to Exotarium. Partial technical modernization took place in 1984.

Birdhouses from the 60s
The old pheasantry opens in 1962 as walk-through Vogelbüsche (bird bushes). Behind every door another cube with walls and ceilings made of mesh.

No immersion in the landscape, you yourself are tripping in a canary cage here. A reverse zoo experience.

The Faust Birdhouse opens a year earlier with the Jewel Hall, a large hall and a free-flight hall each enclosure featuring its own climate system. A striking presentation of marabou storks was realized here in 2014, together with landscape architect Ariane Röntz.

In the Jewel Hall, birds show off their colors against a backdrop of multicolored tiles. No Gaudi, mosaic landscapes though.

Monkey House 1962
Elongated concrete building in the hygienic style of the time. Tiles against the walls, plastic tiles on the floor and stainless steel climbing poles. Angled glass against reflection and for plant growth. Grids serve as room dividers the zoogoers can see through. A variant of the Vogelbüsche. Inside "trees" as pillars and outside a monkey rock.

Grzimek House 1978
In half of this small mammal home, the time difference is around 10 hours to show the nocturnal animals in action. After a long construction period, it opened in 1978 as the largest of its kind. The structure stands on a slope and a sloping route leads past 45 pseudo-habitats. The three-floor building is not simple architecture and features its own climate system per enclosure. The energy bill alone!

Cat jungle 1978, 2001
The Indian dry monsoon region and the rainforest of Sri Lanka have been copied in the outdoor and indoor enclosures. The layout forces the visitors to make an effort to discern a cat. And then it can just happen at those heated sandstone rocks, between bamboo stakes or acacias or when you look into the treetops from the gallery on the first floor. The jetty over the large pond offers a nice remote view of the outdoor enclosures on the bank.

Ape enclosure 2008
Borgori Forest for bonobos, orangutans, and friends is primarily a floating roof that seeks connection with the environment. The free form resembles the leaf of a split-leaf philodendron. By extending the outdoor paths in the enclosure, inside and outside merge into each other. The enclosure covers 3574m2.

Paddocks south of the large pond
The old zoo features some ungulate enclosures. The Zebra House from 1946-49 with a curved façade and thatched roof is the original Bovine House. At the camel abode of 1953, only a moat separates the animals from the visitors. Next to the kangaroos, a mountain enclosure (1874) with West Caucasian turs. The steep hill wearing the tall fence almost like an oversized hat is surrounded by a dry ditch with low-hanging rope rails.

The second zoo in Germany was the first to be established by and for citizens. No biologists, but trade people, well-to-do city dwellers. The philosopher Schopenhauer would be one of them.

City gardener Andreas Weber laid out the garden in 1873 with the large pond in the middle. You can still see the swamp cypresses from that time. The elephant house also dates from 1873. After the Zoological Society House in 1876, the Aquarium is completed in July 1877. The zoo also has predators, monkeys, antelopes, and bears. By the way, in 1874 there was already a birdhouse that survived both world wars reasonably well. In 1962, it was brought down for the outdoor gorilla enclosure. In 1915, the municipality took over control.

In 1944, everything was destroyed. The reconstruction is inextricably linked with director and zoologist Bernhard Grzimek, known for his radio and TV appearances and the new media that he places in the zoo. Sound and Vision. At the Exotarium you could rent a cassette deck to be guided by his voice. He also makes the work behind-the-scenes visible. Visitors get an inside look. Grzimek remains until 1974.

Rebuilt or innovated the old raptor aviaries, the tower of the Aquarium (now Exotarium), and the Elephant House (now Rhino House) are still standing. Like many other city zoos, Frankfurt considered from 1969 a supplementary country zoo referred to as "Ökozoo" until it was decided in the 1980s to no longer keep elephants in the "metro zoo".

Ha, it starts with an underground painted zoo in the subway station. The 19th century Zoological Society House is also striking and the final entry is all about Nature. The illusory tree trunk, in particular, is a direct hit.

Some people build walls, some bears climb them, but the high cliff wall in Ukumariland is not designed for climbing, it defines where to look at. The enclosure features other climbing challenges for bears, trees to shake and designated digging areas, tho.

Renovations at the rhinos, penguins, tigers, and gibbons. Frankfurt has chosen the same motto for the Faust Birdhouse as Bern for the entire zoo. More space for fewer animals.

Almost walk past the door of the Vogelbüsche. Inside is... No... Inside I have become a canary.

The Monkey House is empty but accessible. Bathroom style from the 60s. Outside becomes inside in the Ape House. An inside-out enclosure, I think up here.

Good idea to settle down in Frankfurt to visit William Kentridge's O Sentimental Machine and the second oldest zoo in Germany. Next, get ready for the gamelan festival and the zoo in Munich! 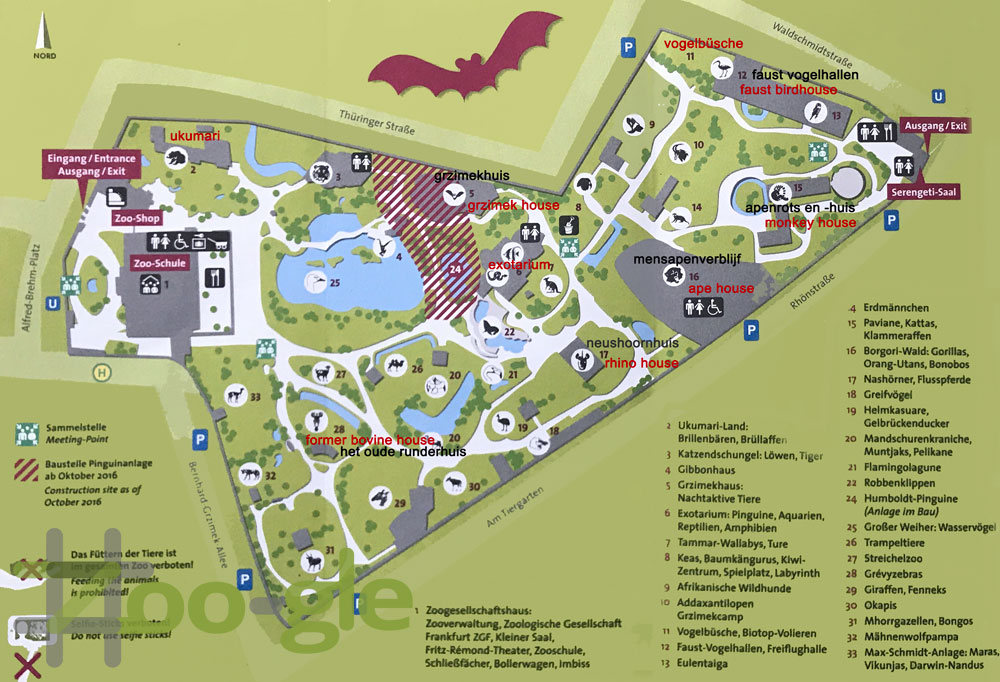