In 1955, almost a year after the Magistrate of Berlin's decision to create an animal park as East Berlin's answer to West Berlin's zoo, the Tierpark Berlin opens on the Friedrichsfelde palace grounds. It is the life's work of first director Heinrich Dathe who teams up with several architects. In 1969, architect Heinz Graffunder is awarded the National Prize First class for the general zoo concept and the Alfred Brehm House. From 1991, Tierpark and Zoo Berlin are under common management.

The animal enclosures are built to impress, huge and as simple as possible without frills, producing a DDR feel. The primary building materials are concrete, natural stone, glazed tiles, and steel. Heinrich Dathe is the director for the first 35 years in which he develops the animal park bit by bit together with the architects Heinz Graffunder, Heinz Tellbach, and landscape architect Editha Bendig (ground plan). To display the animals in a natural setting they embed spacious exhibits in the parkland. Scientist Dathe relies solidly on enhanced scientific research and on the original ground plan. The bear enclosure and large camel pastures surrounded by canals and old trees are among his first projects.

First enclosures
On the first day of business, only a few animal enclosures are completed, among which the deer houses. Dathe's team continues building in successive steps:

Alfred-Brehm-Haus
From 1956, architect Heinz Graffunder works on the Y-shaped Alfred-Brehm-Haus for predators, birds, and reptiles. It opens seven years later consisting of a central tropical hall occupying over 1000 square meters covered with a glazed roof, rows of single enclosures with pastel-coloured tiled walls, a tessellated well, and last but not least two indoor optical open-air enclosures bordered by a ditch and artificial rocks in the arms of the Y. The predator house is the then largest indoor enclosure - 5300 square meters and a height of up to 16 meters - in the world and unique in its construction.

In 1969, Graffunder receives the National Prize First class (100.000 marks) for the Alfred Brehm House and the general zoo concept.

About 1996, the Alfred Brehm House is given a revamp. Because of its listed status merging small cages is out of the question; an essential requirement is to keep the number of outdoor cages at 14. In 1998 and 2000, adjacent enclosures for snow leopards and cheetahs are set up. In 2014, the Alfred-Brehm-Haus reopens after a comprehensive refurbishment and featuring a tree-top walk.

In front of the Alfred Brehm House is to be seen a sculpture of two lions, the work of late-19th-century sculptor Reinhold Begas. These lions originally are part of the Kaiser-Wilhelm National Monument opposite to Stadtschloß Berlin, the Berlin Palace.

Vulture aviary
The 40-meters-long and 18-meters-high vulture aviary set against a granite wall at the back of the Alfred Brehm House dates of 1965.

Pachyderm Houses
The 6000-square-meters Pachyderm or Elephant House by Graffunder opens in 1989, featuring spacious outdoor areas for a herd of African elephants, rhinos, and a herd of Asian elephants. In 1994 a pond like basin for manatees has been constructed in the Pachyderm House including a five-meter-long viewing window.

Tellbach
The ungulate enclosure, the bear enclosure and the dark brown log houses for wisents, deer, and llamas could be traced back to Heinz Tellbach.

Spring 1955, many Berliners are involved in building the zoo's infrastructure. This happens in the context of the national reconstruction program. Tierpark Berlin is located in the Friedrichsfelde palace grounds, a former forest originally converted into a landscape park by Peter Joseph Lenné, in the 1830s. Lenné also landscaped the zoo in West Berlin. The palace is situated in the animal park. On 2 July 1955, the opening is attended by Wilhelm Pieck, the president of the German Democratic Republic. Many of the first 400 animals come from other zoos.

To display as many different varieties of species as possible Tierpark Berlin starts to collect animals like postage stamps. Director Dathes radio and television broadcasts from Tierpark Berlin are highly popular. During the Cold War, the zoo serves as a key leisure center in East Berlin. Under Heinrich Dathes direction the 60-hectare zoo area expands to 160 hectares thus becoming the largest zoo in Europe.

In the 1970s, architect Heinz Graffunder is given the assignment to design the Palast der Republik, Palace of the Republic. Therefore, it is not until 1989 that the Pachyderm House, the last large building project under Dathe is completed.

The fall of the Berlin Wall in 1989, ends the rivalry between the two Berlin zoos. In 1991, the Tierpark becomes a subsidiary of the Berlin Zoo.

The expanse of this Tierpark creates a sense of place appropriate for interpreting a socialist zoo. Did not see all 31 enclosures. Sculptures contribute to the experience, even saw one that is also in the Paris zoo. The massive Pachyderm House looks like an enormous fortified base, a ton-sur-ton palette of gray concrete with gray elephants and even more gray: rhinoceroses. Small concrete-framed windows. Some buildings are looking a bit battered. The Alfred Brehm House is obscured by scaffolding and equipment. In its vicinity a granite stone in memory of the people in work camp Wuhlheide. The vulture aviary reminds a bit of the one in the Amsterdam zoo. 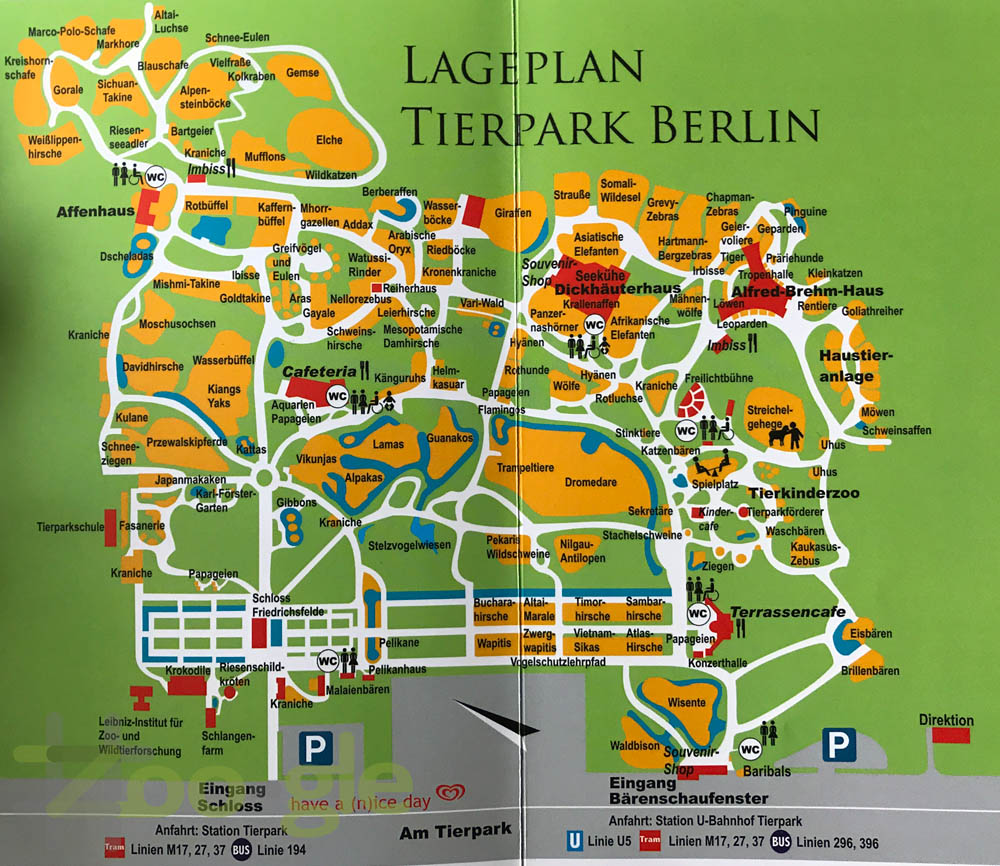 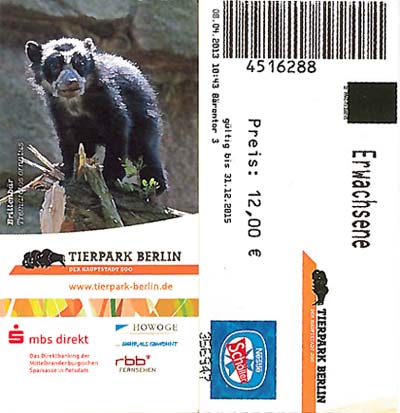 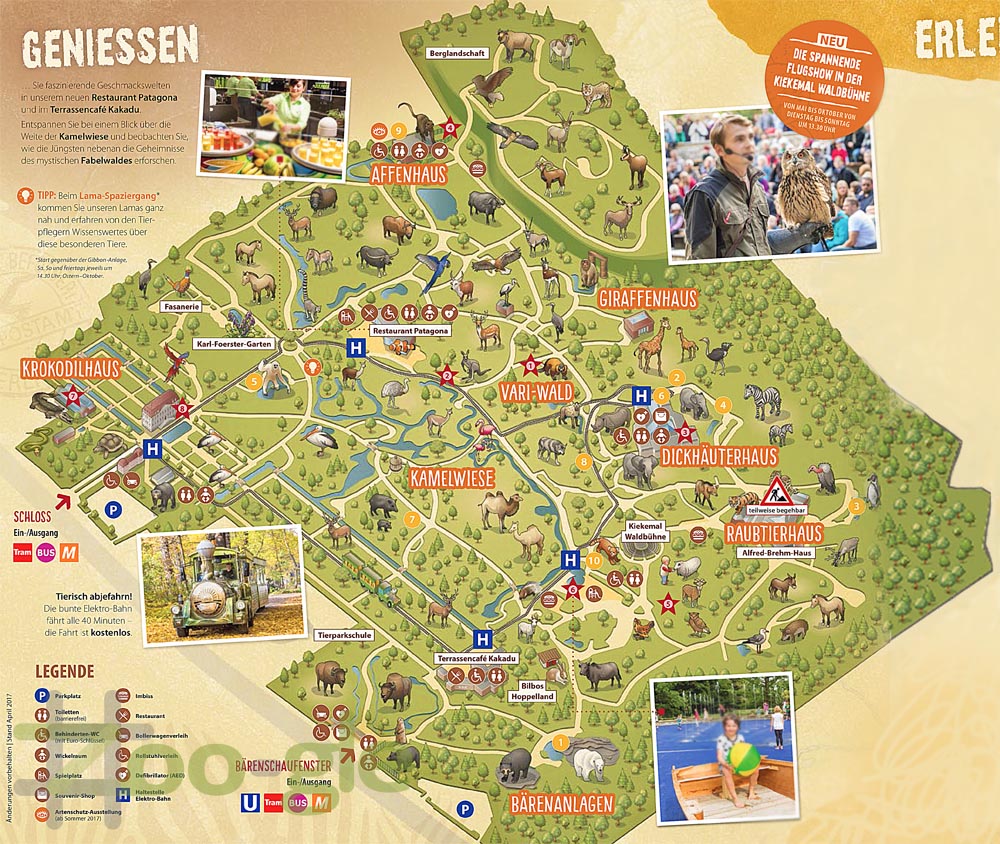