Duisburg zoo consists of two elongated parts connected with a bridge over the A3. It is 85% owned by the municipality, the other 12 and 3% being owned by Friends of the Zoo and private shareholders.

Aquarium
Duisburg animal park opens its first Blockhaus style aquarium, in 1935. Construction of the still existing aquarium House of 1000 Fishes has been completed in 1951.

1958 Inauguration of the penguin and seal exhibits. Construction of the EXPO-bridge to a completely new area east of highway A3.

1985 Launch of the new lion terraces

In ancient China a zoo was called Garden of Intelligence, by the way.

Elephant and giraffe enclosure
Meneki from Ceylon and Singora from Thailand are the first elephants to share the 1953 elephant house for decades with giraffes. The outdoor elephant exhibit has a pool and the public is separated from the elephants only by a pit and a small iron barrier. In 1996, the year in which the construction of a new bridge over highway A3 starts the elephant house is considered too cramped to house both giraffes and elephants. The giraffes move to Cologne and Rotterdam. The renovated elephant house is launched in 1997 including a 204.38 square feet outdoor enclosure, much larger by knocking the giraffe and elephant paddocks into one. In 2002, part of the elephant enclosure is reconstructed for a bull elephant. A new giraffe enclosure near the main entrance is inaugurated in 2000.

Rio Negro 2006
From 2004 till-and-including 2006 the Amazon rain forest the Rio Negro has been set up, offering a panoramic view of two Amazon river dolphins who arrived in 1975 in Duisburg zoo. The biotope will include piranha's, giant otter as well as sirenians. The construction has been realized with the assistance of subsidies from the Sparkasse Duisburg and individuals.

1934 12th of December: foundation of the Duisburg-Hamborner Tierpark am Kaiserberg.

1939 The zoo closes down. It is significantly damaged during WWII.

1946 Reopening to public after arrival of three wagons packed with zoo animals borrowed from the Münchener Tierpark Hellabrunn.

1984 On the 50th anniversary of the zoo, Friends of the Zoo donate the giant otter enclosure. Also improvement of the road network.

1993 The society to promote the Duisburg zoo has an outdoor cage bult for holding and captive breeding of threatened macaques.

Although everything is visually fine - the bridge is green - you can’t get away from the traffic noise. Duisburg offers a great variety of old and modern enclosures. Animal lovers will have fun to check out this Waldzoo for its original collection of animals in a wooded, hilly area. Zoo keepers are taking a walk with former circus elephant Daisy. The map did not always correspond to what we saw and like in many zoos the second section seems hastily mounted. In 2005, Faszination Tiger, a 94 feet campaign sign by artist Reinhard Frese, has been placed here. 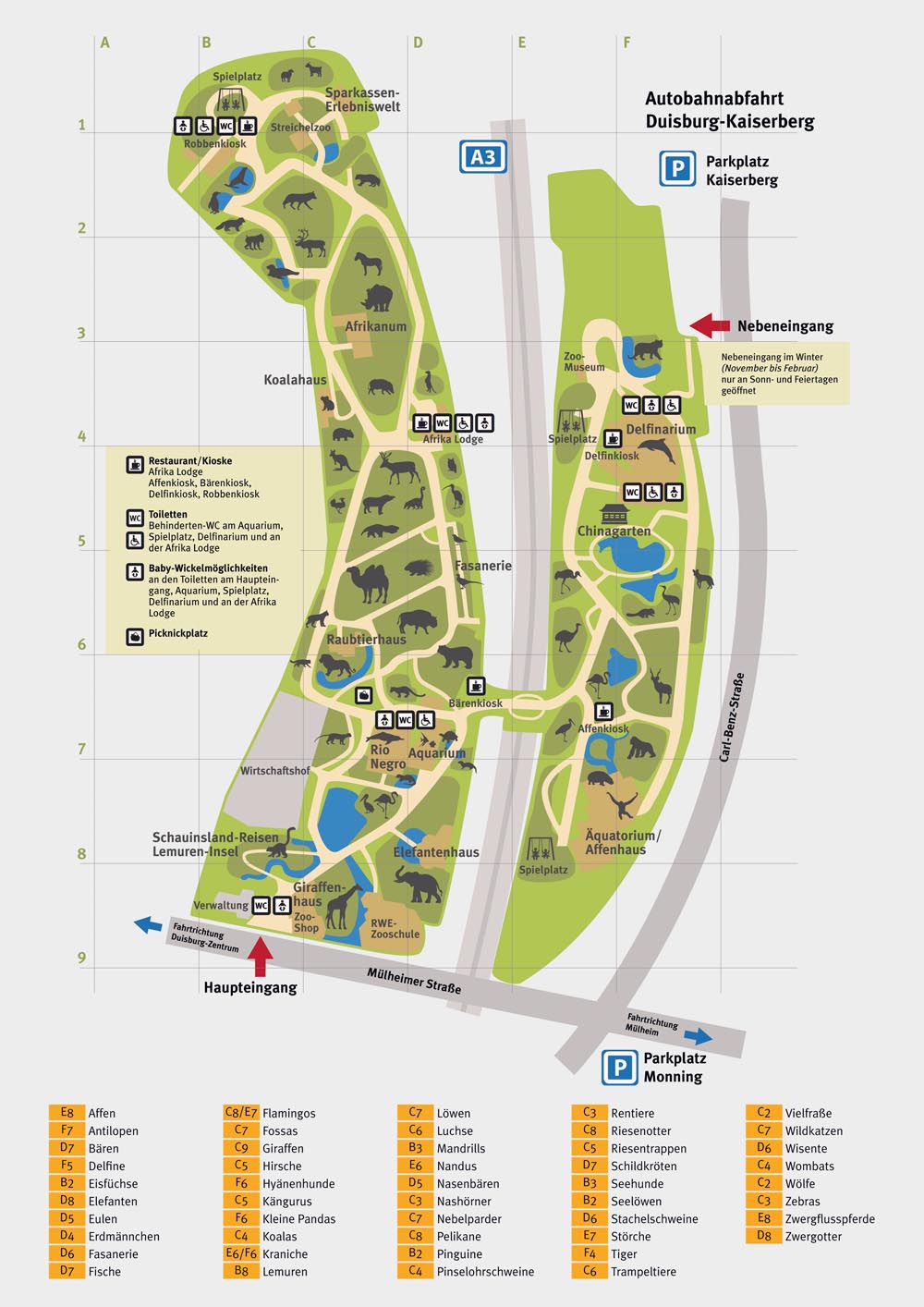