The Zoologischer Garten Dresden is located in the southwestern part of the Großer Garten, a 200-hectare park in the middle of the city. The zoo, therefore, has many old and large trees. Peter Joseph Lenné and Carl Adolf Canzler are the landscape architect and the first architect respectively, in the Gründerzeit. In the Second World War, the vast majority of the zoo in the Florence on the Elbe was destroyed.

Entrance and Africa House
Above the entrance, an elongated flat floor with restaurant and meeting rooms. From the entrance, you step into the exotic world of the Africa House (1999). Here, the elephant and mandrill enclosures face each other having adjoining outdoor exhibits. In the hall, the warm climate of Sub-Saharan Africa has been imitated. From the wooden bridge between the green forest below and the restaurant above visitors can view the plants and animals associated with the landscape. The curved roof consists of steel girders, slanted supports of glue-laminated wood, and ETFE foil.
Architects: Mayer and Koelsch with Henchion and Reuter

In 2018, the hall is extended with artificial rocks and trees.

Goat House 1862
The Goat House is Dresden's oldest animal enclosure still standing. It is built back in 1862 and has since been used as a night enclosure for mountain animals. In 1997, it undergoes a complete overhaul.
Architect: Canzler 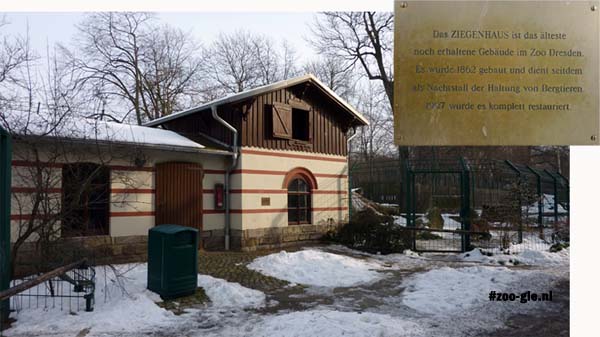 Carnivore House 1862-1864
The original predator house including a warm water heating undergoes a refurbishment in 1936. In 1945, it is hit by bombs. In 1956, it opens again. At the end of November 1962, the repair work is finished. In 2007, a savannah for lions and caracals is added.
Architect: Canzler

Raptor aviary 1920
The raptor aviary is a first in Europe. February 1945, all the birds in the burning cage die but the cage itself remains through the war and is still in use.

Penguin café: Eastern modern architecture
From 1973-2017, the Penguin Café stands next to the penguins in zoo Dresden. The cafe was set up in East Berlin for the 20th anniversary of the GDR. Around the Strausberger Platz, numerous cafés have been built for the "Kämpfer und Sieger" exhibition (fighters and winners expo), including this Boulevard Café (1969). It is ground floor and modular and has a steel skeleton, strikingly folded roofs and large glass surfaces. The style is called ost-modern, an embrace of international modernism and modular construction. There is a discussion about the preservation of the (now disassembled) café as an example of post-war GDR architecture.
Architect: Erich Lippmann

Giraffe and zebra enclosure 2008
The Savannah-themed enclosure consists of two volumes sited in front of the Großer Garten, one for zebras and one for giraffes including a visitor area. The vertical wooden slats match the treetops behind the enclosure thus blurring the line between the zoo and the old Grand Garden. Inside, the visitors can go eye level with the giraffes.

It is striking that the design refers to the savannah without naturalistically copying it.

In the mid-19th century, Berlin, Frankfurt, Cologne, Dresden and Hanover got their own zoo. In Dresden, a public limited company emerged from a poultry association opens the doors of the 12.7 ha zoo on 9 May 1861. Landscape architect Peter Joseph Lenné and architect Carl Adolph Canzler do the design and Albin Schöpf is the first director. A heated monkey house, bear pit and predator house are among the first enclosures. In the early 20th century, the zoo becomes widely known for its research, especially for apes. In 1934, the city council takes over the role of the then bankrupt public limited company.

In the Dresden bombing of 13-15 February 1945, many animals are killed and enclosures are destroyed. Around the elephants where a bomb exploded with such a force that the dome was lifted off the Elephant House to return on the same place, the zoo is least damaged. In 1999, three quarters of the zoo are restored or rebuilt.

At minus 14 degrees Celsius we enjoy a winter walk through this quiet zoo of the Florence on the Elbe. The completely unexpected retaliatory attack after the Coventry Blitz is still felt. Dresden was more of a cultural landmark than of military significance. Dresden's zoo also reflects that in the GDR era there was seldom a budget surplus and the renovation process went on for years, little by little. 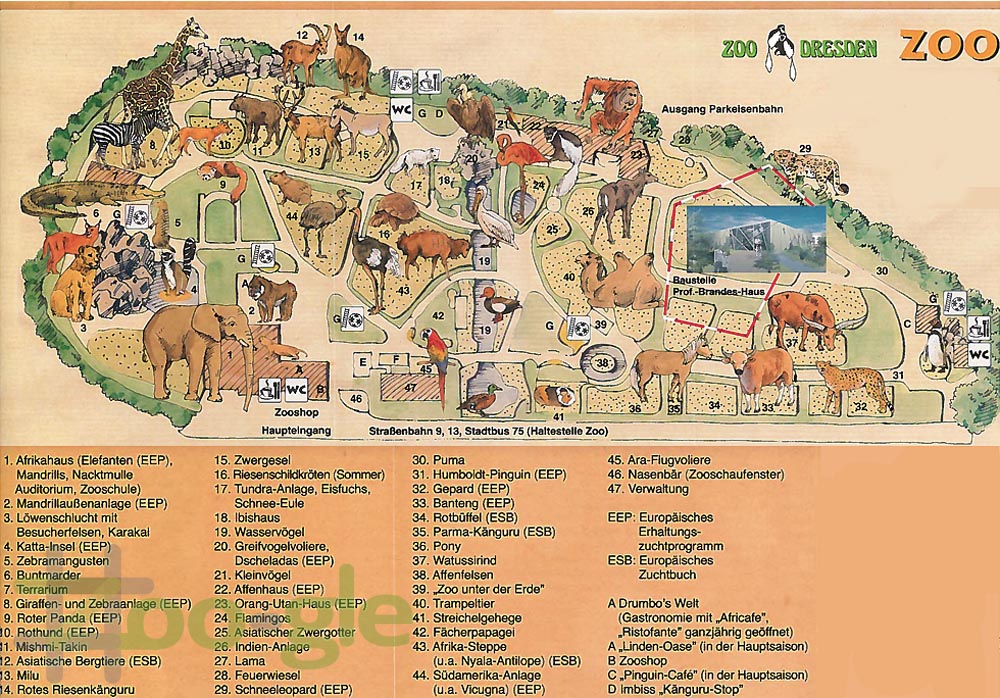