A Waldzoo (forest zoo) where aside from the inmates also squatters occur. I once called them the free spirits in the zoo. An information sign tells you this involves 76 species of free birds and 15 mammal species.

Not what you call an architectural garden but the pavilions for hippos, tamanduas, otters, orangutans, jaguars... are all hexagonal. They contain a lot of wood or are entirely made of steel wire. Sometimes a glass hat on top, a dormer window reminiscent of a parasol roof; pagoda roof is too big a word. The repeated hexagons and the historical landscape with old trees provide a peaceful atmosphere. This zoo is geographically structured.

South America
The main part is South America featuring the tamandua house from 1989. In the tropical Amazone house (1992) you enter the second floor where birds flying loose "between the treetops". Here, you descend to the bottom dwellers on the first, while the wall on the ground floor where the Amazon River flows, features built-in aquariums.

Asia
In Rainforest house Rumah Hutan (2004) a residential community of orangutans, tapirs, and smaller. It has been realized at the request of the friends of the zoo. The zoo friends, a lottery, gifts and the municipality account for the €8.5 million building costs, while 14 years later another 200k is needed for a major refurbishment. In the outdoor area of the orangutans, a low wall defines the area they share with the tapirs.

The humans have different platforms and peepholes to view the animals at eye level. The apes have tree houses to hide from sight. Maybe there should be a camera in a tree house ... And that the apes again will cover the camera lens with something. Sir David Attenborough recommends, by the way, peepholes to respect the privacy of the gorillas.

In 1953, Dortmund is ready for its own animal park that opens on 24 May, on 9 hectares of land. In 1963, the municipality agrees to a first extension, and in 2000 the Hacheneyer Wäldchen has been designated as an expansion area.

Where in the 1970s "Tierpark" (animal park) is perceived as a well-suited name referring to the park landscape, in the 21st century Dortmund goes for the more international name "zoo".

The launch of animal enclosures

Renovation
When the zoo is 50, 60 years old, there is a lot of competition from leisure parks and often richer zoos in the Ruhr area that has the highest zoo density in the world. Also, there was a considerable maintenance backlog since 1980, 1990.

In 2016, the municipality comes up with a program of €31 million. This includes €5 million for the redevelopment of the sea lion enclosure while the old one is retained as a legally required secondary basin. Furthermore: Amazone house, Africa stable, bear enclosure, the large bird lake and a Yurumi park.

Sculpture Zoogucker by Bernd Moenikes stands in front of the entrance square. The zoo starts fairly common with a bird lake and a fountain like fruits and vegetables are almost always located near a store's entrance. We are here in a green family zoo with resting zones. In addition to hexagonal animal houses, glass panels are notable that seem to touch the street stones and some improvised-looking fences. Never before I have seen a tamandua house in a zoo. And yeah, in the Westfalenpark further down there is a failing Pokemon Go event going on; hence the AR photos. Thanks to Synco Schölvinck for that. 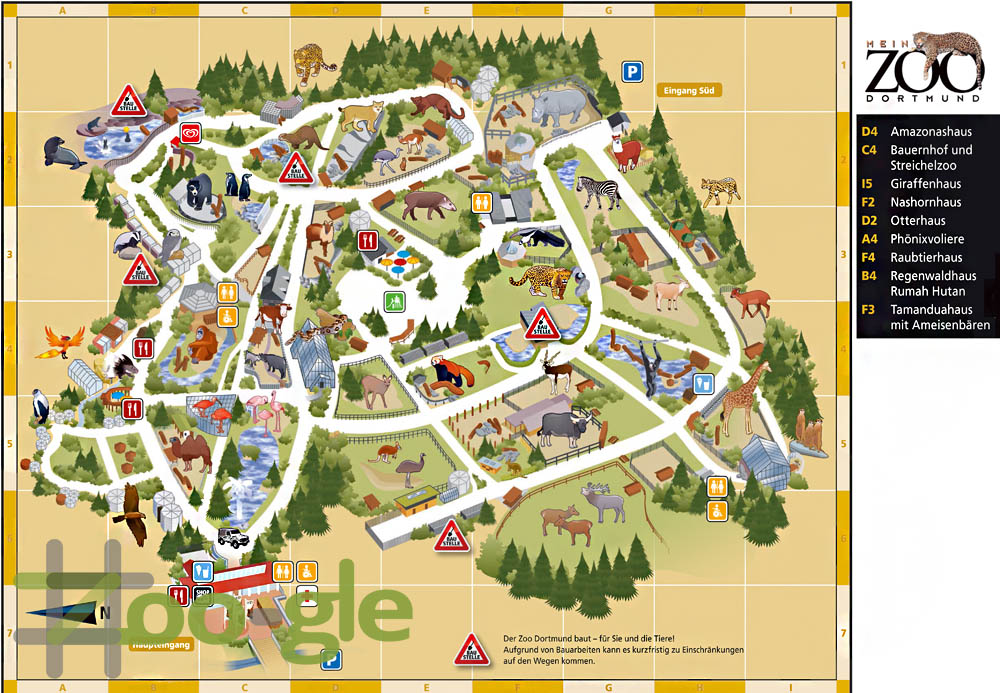