Visitors purchasing a tourniquet ticket at the not-so-spectacular entrance also gain access to the complex housing the aquarium, reptiles, and insects. The zoo site covers 20 hectares of which two hectares is the elephant park. When developing the master plan 2020, the zoo has stated to remain a classical zoo instead of becoming an adventure park.

1863 Construction of the Giraffe and Antelope House in the Moorish style according to a design by Josef Felten, followed by the annex for the elephants (1874). Nowadays, this oldest structure is a listed building.

Director Bodini´s visit of the elephant temple in the Antwerp zoo inspires him to build animal houses in an exotic and fantastic style, in Cologne as well as later on in zoo Berlin. Founder Garthe (a teacher!) also designs animal enclosures like the grotto for grizzly bears (1862) located near the current cheetah enclosure. And in 1863, behind the Bärenzwinger (bear pit), a high goat and sheep rock is built consisting of basalt, lava, tuft stone and lime cement with a rocky bridge in the middle for which he himself made the model. 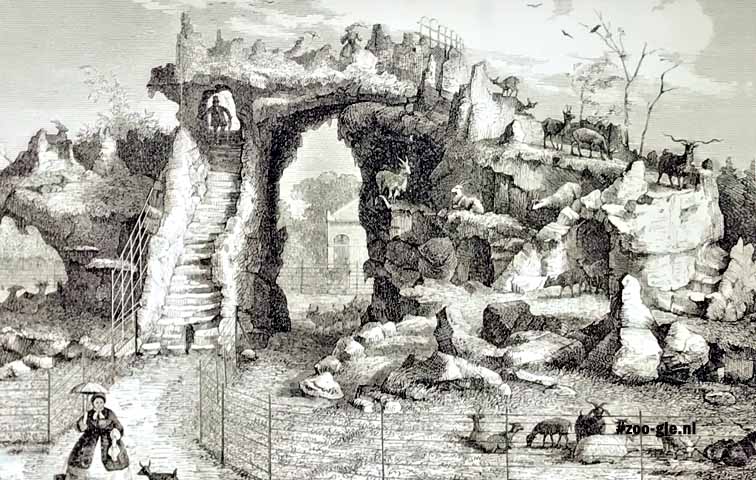 1899 The historical Bird House (later called South America House) which resembles a Russian Orthodox church will be restored and expanded according to the master plan 2020:

a new roof and ceiling, temperature controlled walls, a suspension bridge and a "feeding tree". Daylight will flood the central hall and a veranda reintroducing the building's original layout. During the renovation works, the historic character of the building will be kept intact. The South America House will be part of the zoo continent "Jagwar".

1971 The Aquarium opens as an autonomous part. Kurt Meyfeldt receives the architectural prize of the City of Cologne for this structure with 45 basins of different sizes. The Rhine Panorama is particularly impressive.

2000 The Rainforest houses Southeast Asian animals in a rocky valley in a rainforest where sensory perception is key in the user experience. Viewed rationally, there is a tropical greenhouse featuring a transparent dome roof.

May 2004 New outdoor enclosure for the Erdmännchen (meerkats) where large reversed umbrellas absorb water to keep the soil dry and where warm lamps compensate for cold air.

September 2004 The Elephant Park, which at two hectares accounts for ten percent of the entire zoo features indoors seven palm tree pillars as construction under a timber “leaf roof” and a waterfall pool. The elephants can also swim in the deep moats surrounding the exhibit. The various plots of the open-air enclosure (two for the female elephants and a bull yard) can be closed down and decompartmentalized. Cameras follow the animals and sometimes they are secretly weighed. Many viewing points around.

2010 The Hippodome opens to mark the zoo’s 150th anniversary, a replica of an African river landscape. Or as read in The Acrylite Magazine (2011 #11):

"Visitors walk right in through the middle of the enclosure, like when Moses divided the waters of the Red Sea. On the one side the hippos, on the other Nile crocodiles, separated from visitors by 0,5 inches of Acrylite..."

In 1860, the zoological garden Cologne starts on the initiative of Caspar Garthe and citizens who form a shareholding company. Heinrich Bodinus is the first director. Between 1878 and 1932, seven peoples' shows were held at the Cologne Zoo, displaying "exotic peoples in their daily activities”. During World War I, the City of Cologne takes over the majority of the shares to prevent closure.

1945–1947 Closure and reopening of the almost completely destroyed zoo.

1960 The zoo celebrates its centenary with extension to 20 hectares. 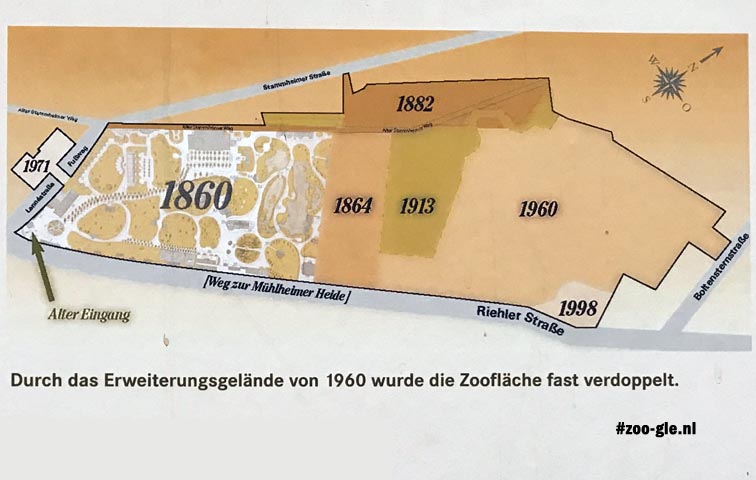 1985 The Ape House opens on the occasion of the zoo's 125th anniversary.

2002 The small mammal enclosure for otters, meerkats, and raccoons.

2013 Launch Master Plan Zoo Cologne, Enthusiasm for animals. When developing the master plan 2020, the zoo has stated to remain a classical zoo preserving its historic charm, that will not become a theme park. The zoo is ready for zoning into continents.

On our way to Documenta 14 Kassel, we decide to stop at Cologne Zoo. The entrance still looks like the seventies emphasized by the old entrance deer statue beyond. In the South America House a nice retrospective presenting the development of the zoo. A few seemingly forgotten residents are sleeping here in high wire-mesh tunnels. The vacant old elephant building looks like it will become a zoo museum, too. At the backside, the axis of this structure can be discerned despite some climbing gear for monkeys. The facade of the elephant house (2004) looks like the skin of an elephant and the palm pillars under the timber palm leaf roof construction are of modern zoo architecture. The logo 2008 displays an elephant, featuring the Cologne Cathedral, a rhino and a giraffe in the negative space. Quite spiffy. Check it out on zoo map 2017.

After the (for the third-oldest zoo in Germany) little impressive entrance, we walk to the new elephant park, which is operational from 19 September 2004. The spacious indoor enclosure with drinking and bathing water and separate sleeping areas is state-of-the-art. Keeping elephants is its specialty, but Cologne zoo also features monkeys. The Hamadryas baboons parade counter-clockwise around the Hagenbeckstyle monkey rock. Two black and white makis are depicted on the 1981 logo. 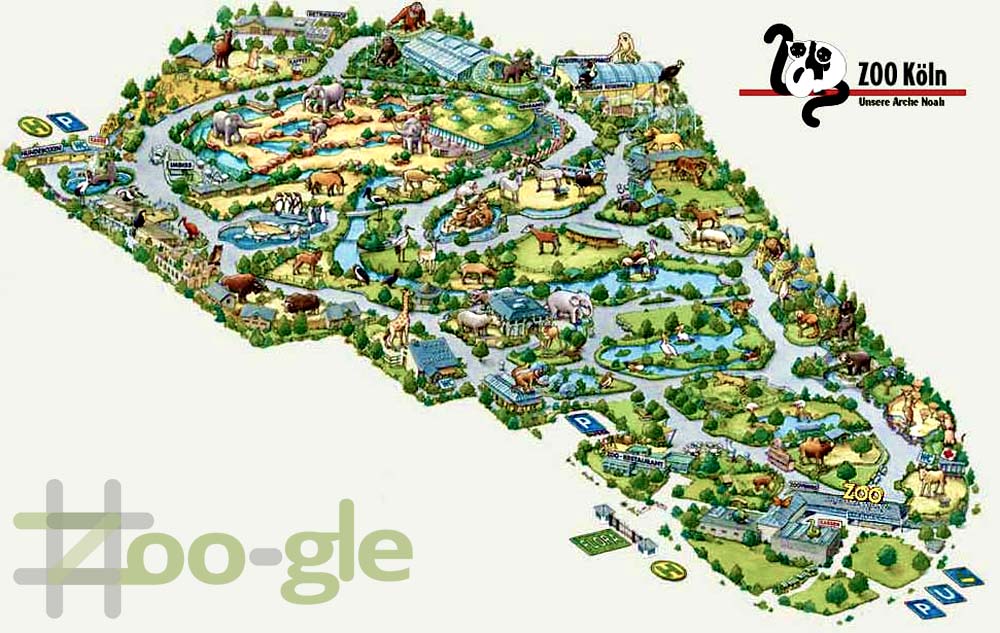 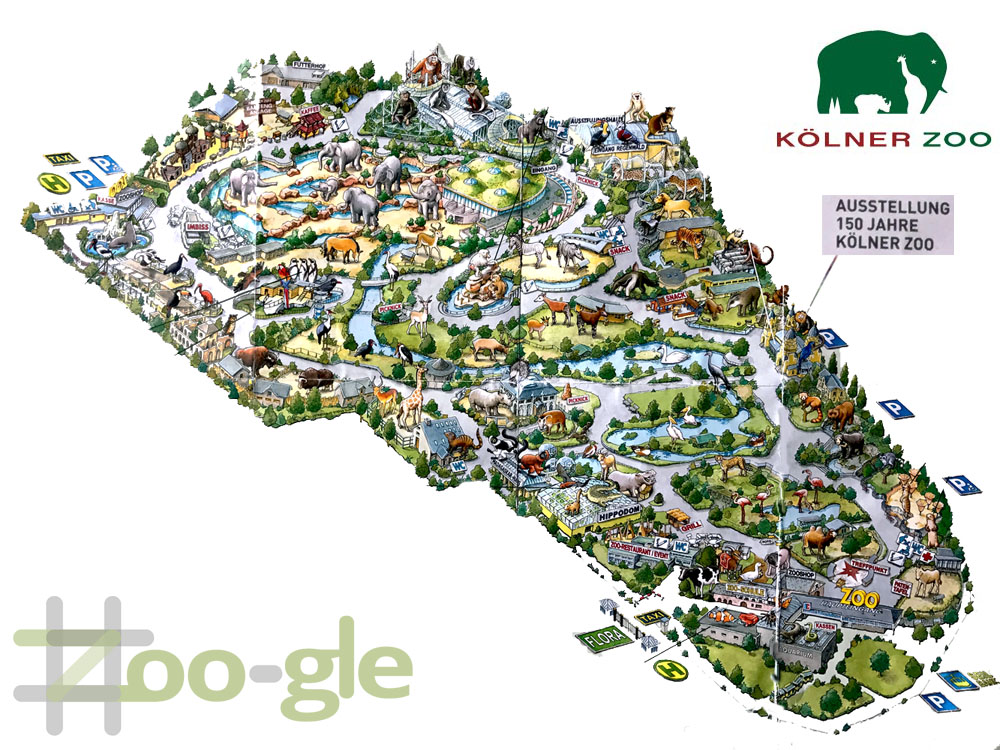