In 1841, King Frederick William IV has donated the animals of the Prussian royal menageries from Peacock Island to the citizens of Berlin. For a zoo! It is the first zoo in Germany and the ninth in Europe, designed by garden artist Peter Joseph Lenné. Nowadays, you would call him a landscape architect.

Antelope house
The centrally located Antelope House for giraffes is older than the Indian pagoda (Elephant House) at the entrance. Dating back to 1871/72, it is the oldest animal enclosure in zoo Berlin. The exotic design including four minarets is a typical product of its time, referring to the country of origin of the animals. It's a reference with a wink though, because contrary to common knowledge, the richly decorated entrance hall is giving off the impression that giraffes do live in a fairytale palace. Just like in the Antwerp zoo the Antelope House is designed in a Moorish style. In 1872, this jewel of zoo architecture became famous when Emperor William I, Emperor Francis Joseph of Austria and Hungary, and Tsar Alexander II met here for a copious breakfast, followed by a walk at the zoo.

In former days, the building used to be surrounded by 22 outdoor barred enclosures, which were replaced by six enclosures in the 1980's.

Zebra house
An elongated Arabian building with Moorish towers and a balcony on three pillars serves primarily as a zebra house, since a renovation in 1910. It looks different on each side. It also fits with the German predilection for knight stories, not to say that the Germans almost invented romanticism... And is not this building the very example of a white castle?

20th and 21st century
In 1939, zoo Berlin is the self-proclaimed most important zoo in the world, housing 4000 animals of 1400 species of mammals and birds. In addition, the aquarium was home to 750 different species of fish, reptiles, amphibians and invertebrates, all in all, 8300 specimens.
91 animals survive the bombing in November 1943, January 1944 and April 1945.

After the war, the architecture is populated with rectilinear buildings. This is exemplified in the monkey house (1959). The predator house is a functionalist building.
You can find the camels at a grey box-shaped building that would not look out of place in The Style, as evidenced in the stacking of stones. Only the roof could be a little sleeker à la Mies de la Rohe....

In the mid 1970s, zoos replace iron-bar cages with glass-enclosed structures. And ten years later the enclosures are more spacious, more hygienic and de grasslands are dotted with rock outcrops. The barless zoo has become ubiquitous.

The hippos have experienced all different architectural styles.
In 1874, they move into an Asian temple and in 1988, into a Moorish hippo house which was replaced in 1956 by a functional home-sweet-home. In 1997 they are kept in one of those quasi-natural style enclosures that prevailed at the end of the twentieth century. The structure has two geometric glass domes; the (pygmy) hippos can be seen above and below water. The inhabitants of these glass strongholds can swim from one basin to another; the guards can close the channel with lock gates.

Aquarium
You will have to buy a separate ticket for entrance to the aquarium, but the 1913 building is worth visiting. It has been expanded twice; the larger basins were added later. The stained glass has survived the war on the first of the three floors and has been incorporated later into the building. I have never seen a stained glass catfish before! The aquarium has gained fame for its beautifully presented jellyfish collection.

Indian pagoda or Elephant Gate
In the lean years after WWII, a replica of the bombed elephant house (1899) has been erected. Two sandstone elephants lying under a richly decorated "prawn cracker roof", attract visitors to strange kind of animals from distant regions. The Indian pagoda is among Berlin's most photographed attractions and has been adapted every time to the latest insights. The original external wall was equipped with lemon yellow tiles.

Pheasantry 1962
Particularly remarkable is the gallery of herons, pelicans, and other feathered friends, carved in wood at a school of sculpture in the late-18th century and restored in 1982 by Willi Kettner.

Giraffe house
The giraffe house is rebuilt and so is the Russian wooden house next door as well as the Siamese cattle house (1907) for the bantengs, in cooperation with the Thai government. These accommodations are still visually linked to the country of origin of the animals. The Russian blockhouse and the American Indian enclosure for bisons and wisents are combined to one building. The outdoor enclosure of the lions, from 1936, was largely undamaged in WWII. The giraffe house had been reopened in 2004 after a renovation for a sloppy 950,000 euros. There are new stables for the antelopes and the giraffes. The middle section suggests an African savannah where visitors are separated from the animals only by a waterfall and are often face-to-face with the giraffes. According to the annual report, the access hall exudes nostalgic flair, after the renovation.

Birdhouse 2013
The bird house by architects Saradshow Fischedick Berlin has been completed in 2013. It has been tastefully designed to blend well into the surrounding zoo, and... definitely not 19th century. You see a modern, choreographic space planning and titles that are not centered above the doors. 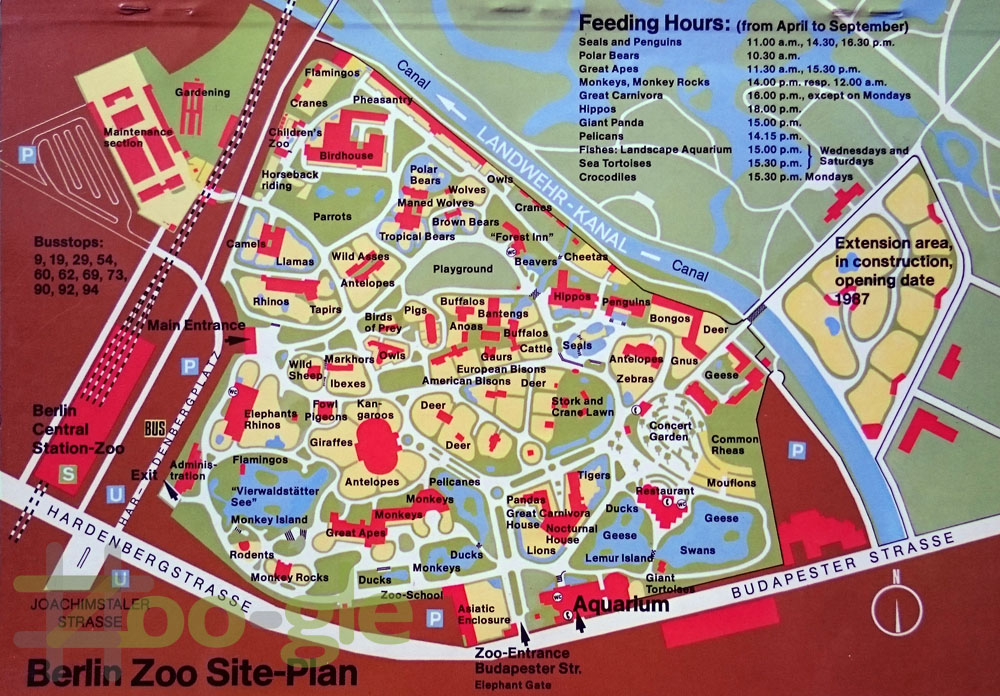 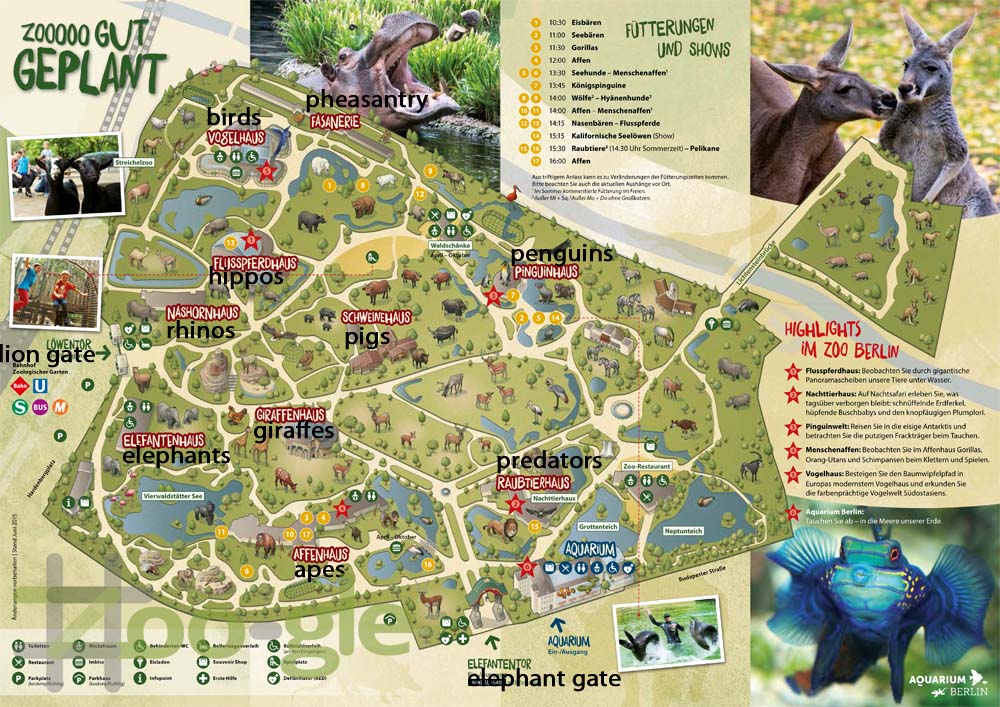