Paris has got two zoos, the Ménagerie and Paris zoo (Vincennes zoo).

A very 21st-century zoo
After renovation 2008-2012 the zoo is totally 21st century. As expected, the new design borrows something from the great rock. Just like the puffin's hall in zoo Bern, it is inspired by a rock crystal. Architectural firm Tschumi worked with a Lego box filled with a number of geometric shapes to compose aviaries for birds and mammals. Every aviary slightly different but part of a greater whole, though they seem randomly scattered around. Even in the 100-meter-long rainforest greenhouse, you come across polygonal aviaries holding tropical animals. The shapes are made of black tubes and transparent gauze.

In addition to the rainforest greenhouse with its own design, the new large aviary alongside the large rock stands out in size.

Storeys
The great rock and the predator house are still standing. Geographic organization and landscape immersion have been implemented. Visitors and animals share the recreated nature. As in zoo Helsinki (also redesigned by TN + and Beckmann n'Thépé from Paris), "being a guest at the animals" is part of the concept. The 6 storey-experience has to come from added walkways, viewpoints and underwater windows. The most beautiful and highest view from the great rock is not offered, though.

Camouflage and framing
The game of camouflaging and focusing can be seen everywhere. The long horizontal lines at the giraffes are cool. Wooden envelopes or second, third skin in architectural jargon. They filter facility buildings out of sight or obscure signs of confinement in a classical way. The baboon rock is trickier. The surrounding wall is too high to look over but through the windows, some frames in the wall, you do not see anything either on a busy day. A similar point can be made about the restaurant. Queues, queues, queues. The panoramic windows to view the sea lions lie in the depth of polygonal stands. Large glass panes to view mesmerizing water bubbles, sun and swift-streaking animals.

Outstanding vegetation composed by Atelier Jacqueline Osty et Associés. First, you think, this looks like a tropical tree and then it turns out to be a European look-alike. Thus, each biozone got its own vegetation planted in clusters or just well-chosen.

Master plan 2005: six-storey zoo
In 2005, the Natural history museum takes its role and initiates a new master plan for the Parisian zoo. At the end of the year the design of the landscape architects TN+ is elected for its works of landscape architecture, conservation and education.

The TN+ design includes the artificial rocks which will be used to camouflage some buildings, just the way Carl Hagenbeck would have done. Enclosures will blend into the landscape. From the entrance, visitors will walk through a gorge to discover six habitat zones at higher and lower elevations. Eco pavilions serving as information centres are placed between the biozones. The pavilions and tropical halls make it easy to hit all of the zoo's indoor exhibits if it pours. The shower must go on. Le zoo à étages, the 6-storey zoo where animals can be seen from above, underwater or at eye level in the style of their wild habitat and vegetation:

Charles Letrosne
Architect Letrosne is obviously influenced by Carl Hagenbeck's fenceless zoo in Hamburg when he designs: "a theatre stage in concrete, a stylish landscape, wild and spectacular, but overtly artificial".

Separated by ditches, water and camouflaged rocks, the wild animals seem to stand in nature at least in the eyes of the public who at the beginning of the 20th century did not have a clear picture of African landscapes. In this dreamed nature le grand rocher, the iconic great rock of 67 meters (250 ft) is the principal point of focus.

In the original zoo, the animals are grouped by species. Several sculptures located throughout the zoo site created a dramatic outdoor experience.

The great rock, just fake or true water tower?
It was quite daring in 1932, to build a reinforced concrete frame avoiding diagonal braces or side-effects of dilation. Moreover, architect Letrosne boldly decides to cover the building with a concrete skin of 5cm thickness, sculpted and painted to create the illusion of a natural rock sculpture.

As the water of Paris was considered unsuitable at that time, the park drilled its own well. The great rock conceals two water reservoirs of 1300 and 800m3.

At the time of the World Exhibition of 1931, a small zoo is set up in Bois de Vincennes exhibiting exotic animals to the public of Paris. Following the enormous success of this temporary zoo, the Natural history museum and the city of Paris join to create, on 15 hectares, the current zoological gardens of Paris. Seventy years after its foundation the zoo has become increasingly rundown. Because of its crumbling condition, the great rock has to close its doors to the public in 1982. Its restoration starts in 1994 to open again in 1997. Some years later it shuts down again to reopen in 2003. Most of the large mammals and carnivores have been moved to other zoos.

Visits up to and including 2008

We go for the 352 steps to the top of the great rock (the elevator was not working) to enjoy an unique view of Bois de Vincennes, Montmartre and the Eiffel Tower. During the climb we glanced at the mouflons à manchettes (Barbary sheep) that inhabit the rock and at the vulture aviary which is provided with ingeniously discrete grille.

The entrance by architect Tschumi is already inventive. You enter an aviary without noticing it. Bag check too. According to the master plan, you are processed through a gorge in the right direction. We go counter-clockwise, though so that signs can not spoil the party. Starting at the exit of the large rainforest greenhouse of Tschumi. The path is solid featuring good drainage and a nice zigzag. Everything designed in the polygonal pattern. Even the coffee cups. The pieces that form the new aviaries make me think of a Tangram puzzle and the pointed tops of mountain peaks. We spot hatches above the viewing windows to keep visitors dry. Good balance in the whole picture: a lot of new structures mixed with old icons like the vulture aviary still marking a corner of the zoo. Enclosures are made of better concrete. A vivarium in the great rock looks provisionally, even worse by the Halloween decoration. Definitely no competitor for the vivarium at the Ménagerie. Nothing to be seen (yet) of the panorama restaurant or other rooms planned in the great rock. The new path no longer connects to the outer staircase of the rock where the climb began. At the vicuñas in Patagonia spruce act like cacti. This made my day! 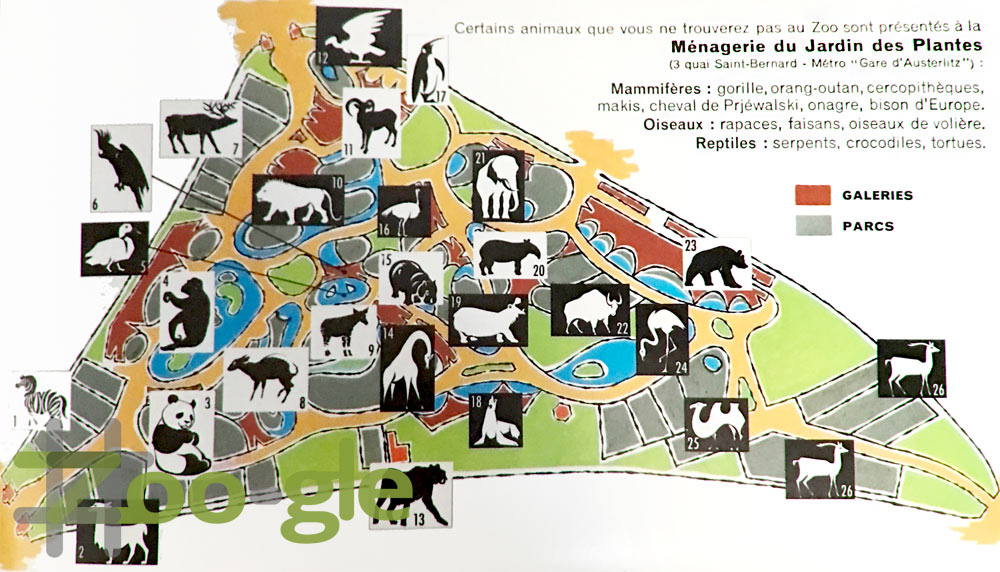 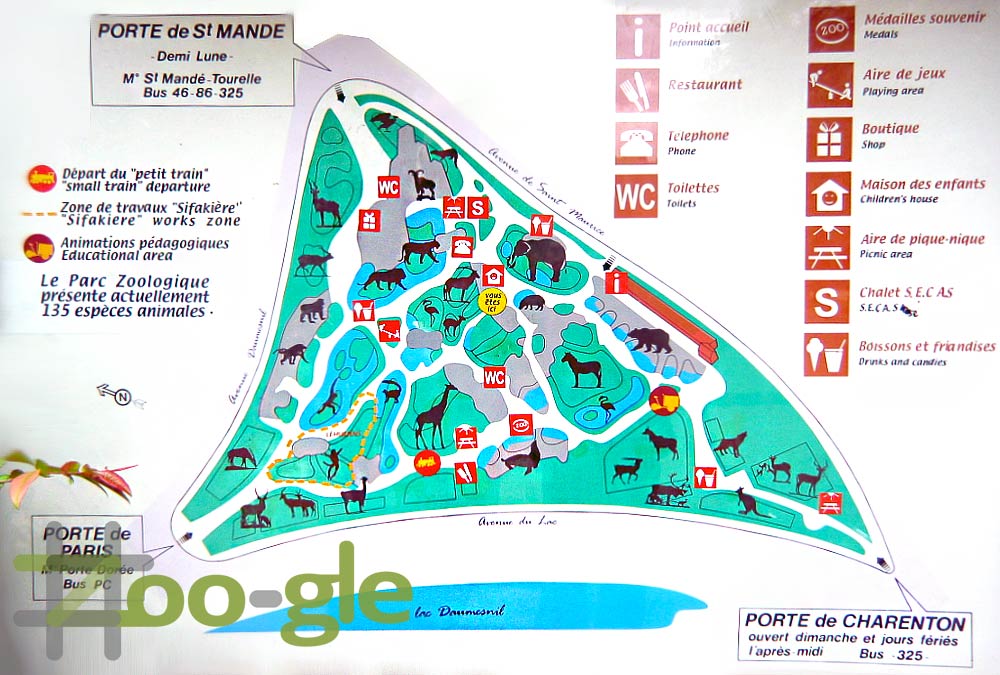 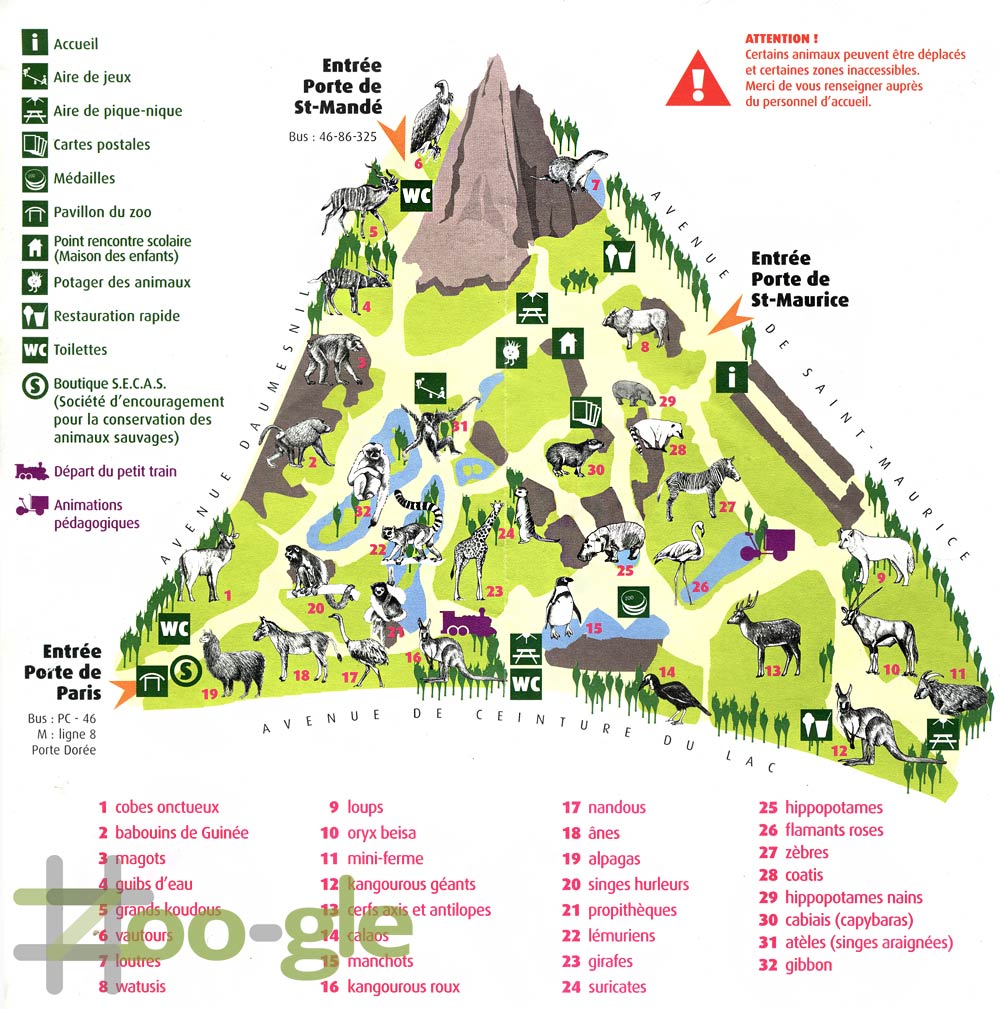 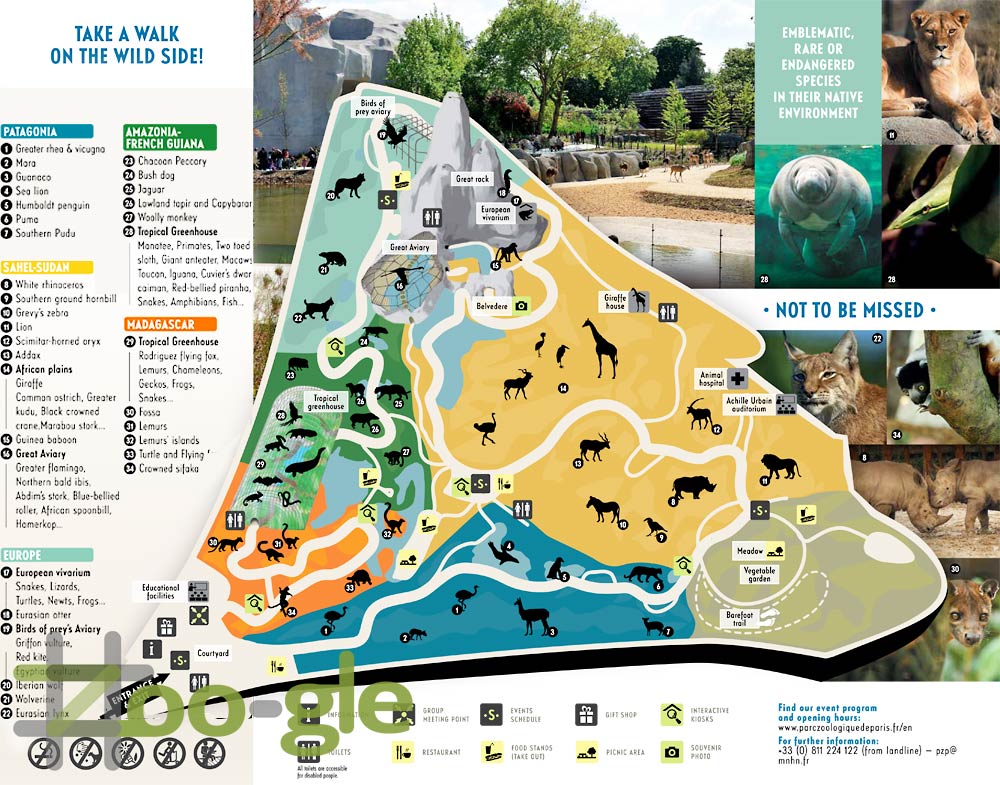