Today, there are only two remaining 18th-century menageries still open to the public, one is in Vienna and one is in Paris. Le Zoo du Jardin des Plantes, or la Ménagerie as the French say. The menagerie is an initiative and part of the Natural History Museum and assigned to the department for botanical and zoological gardens after a reorganization in 2001. The menagerie is located in the botanical garden, where already in 1626 Louis XIII’s physicians planted medicinal herbs. The gallery-like display of animals expresses imperial power.

Where symmetry and order rule in the Jardin des Plantes, the Ménagerie has been designed in the genre of a Romantic landscape garden. An English landscape garden grooved with winding paths on a relatively small surface of 13,6 acres. The sloping terrain ensures sweeping vistas.

A piece of authentic-looking wild nature smack bang in the middle of Paris!

Cabins
The Vallée Suisse contains a variety of stables (1802) dressed up with clay, tree trunks and thatched roofs which help give this part a romantic atmosphere. Architect Jacques Molinos is said to be inspired by Marie Antoinette's farm at Versailles. These cabins are in line with the 18th-century follies in amusement parks, too. The surrounding metal bars (≈1880) used to be chestnut trellis, a completely different look and feel.

Napoleon
To host animals brought back from his expeditions to France, Napoleon orders first of all la Rotonde in 1804. Completed in 1812 the building, designed by Molinos, is shaped like the Napoleonic Legion of Honor Cross. The structure was originally made for ferocious animals but held elephants, the first giraffe, and hippopotamuses, while nowadays, only giant tortoises scuttle across the lawn and the interior is used for temporary exhibitions.

The Rotonde is followed in 1805 by three 20x8m bear pits which are also built on behalf of Napoleon by design of architect Molinos. The structures are interconnected built in a straight line. One "private room" for each colour bear (white, brown, black) featuring one tree, a running water spigot and a trough. Bare limestone walls, large cobblestones. Blind arcades and vaulted alcoves in the depth. And a thick low (!) stone parapet above. After several incidents, a continuous iron fence is placed around the parapet.

Other 19th-century enclosures added to the original cabins

The enclosures from the interbellum period are built by the scientific standards of animal care at that time. Since 1993, the structures in the Ménagerie are all listed as monuments.

French Revolution
The Ménagerie dates back to the French Revolution. November 1794 it is officially founded by the Museum of Natural History to host the former animals from the royal menagerie of Versailles, the aristocratic menagerie from the Duke of Orléans and seized animals; the use of animals for street performances has been just prohibited. By emphasizing the importance of education for Parisians and scholars like Cuvier, 18th-century scientists manage to save the royal animal collection. In addition, the menagerie serves as a place to house gifts of wild animals from powers in Africa or Asia.
And so it is, we can still stroll through the Ménagerie at a courteous pace.

Martin
In the 18th century, the French called all bears Martin, after St Martin. In 1820 Martin killed a man who had ended up in its pit in the menagerie. Monsieur Martin was really accused of cannibalism but freed from blame.

The story of the giraffe
The first giraffe sent to France is a gift to King Charles X, given in 1826 by Muhammed Ali, Pasha of Egypt. As the giraffe appears to be trained in Egypt to follow milk cows, the decision of walking her from Marseille to Paris is easily made. Naturalist Étienne Geoffroy Saint-Hilaire accompanies her, too. During the 550 miles journey, the giraffe causes tons of excitement. It was much more about crowd control rather than controlling the wild African animal with a French lily print saddle cover on its back. This first live giraffe to be exhibited in France is presented to the king causing quite a sensation. Numerous items decorated 'à la giraffe' are sold. One year later an equal giraffe mania is seen upon the arrival of the first giraffe in Tiergarten Schönbrunn. The giraffe dies after living in the Ménagerie for 18 years, five of which with another live giraffe.

Visits up to and including 2011

Always a pleasure to enter the Ménagerie from the Jardin des Plantes. Old trees, old buildings, the background sound of the city, an urban zoo, that's for sure. A time travel zoo museum, too.

When the Art Deco ape house by architect Chaumisse was finished in 1934, the recently opened Zoo Vincennes attracted all the attention. First question today: all the money for Zoo Vincennes and nothing for the three times smaller historic Ménagerie? The garden looks overgrown. Sightlines spoiled by fake animals as part of a light festival. Unworthy an 18th-century zoo. Good to see the cabanes from 1802, so unique here. The water basin in the bear pit now filled with soil. Some renovation is visible, of course. Redesigned information panels, sometimes ok-ish, sometimes garish colours, sometimes quite a lot. The interior of the predator house and the ape house are refurbished. Jungle like wallpaper for the apes. And somewhat distracting paintings - I mean where do you want me to look at - and yellow light for the big cats. The reptile palace is still in the works. Very curious!

In the menagerie of Paris, my eyes dance with the tiles in the art deco buildings. 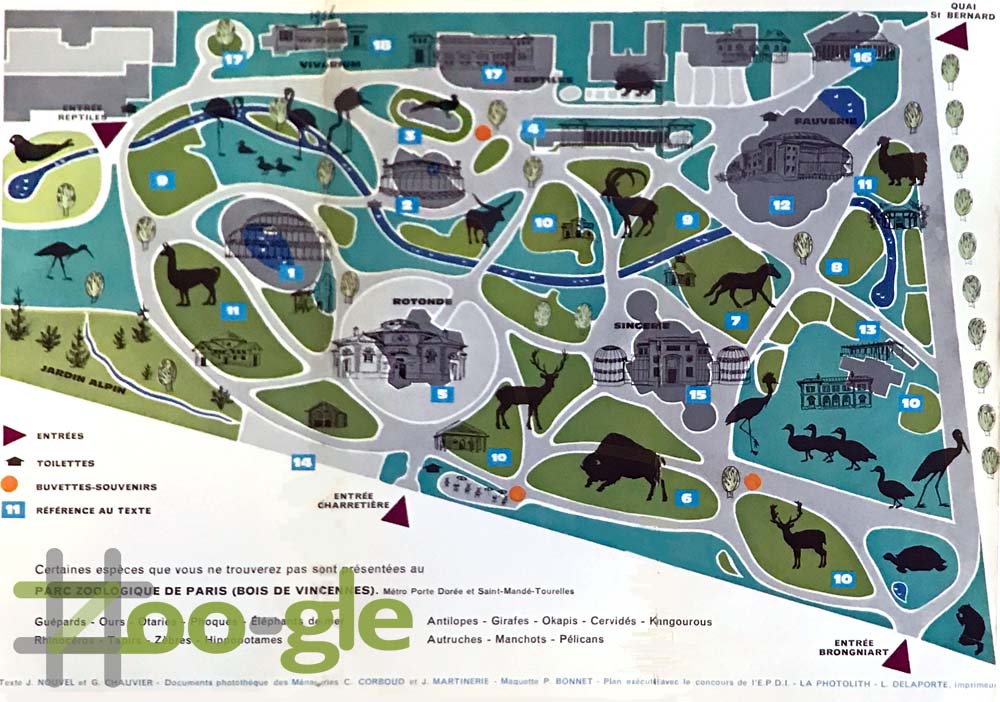 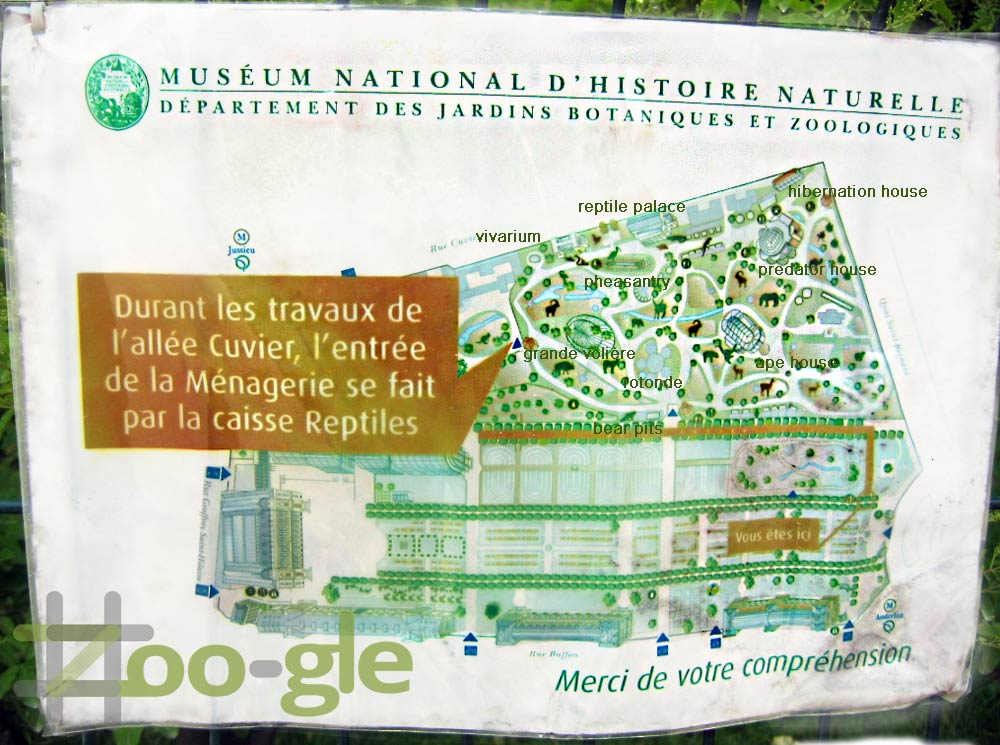 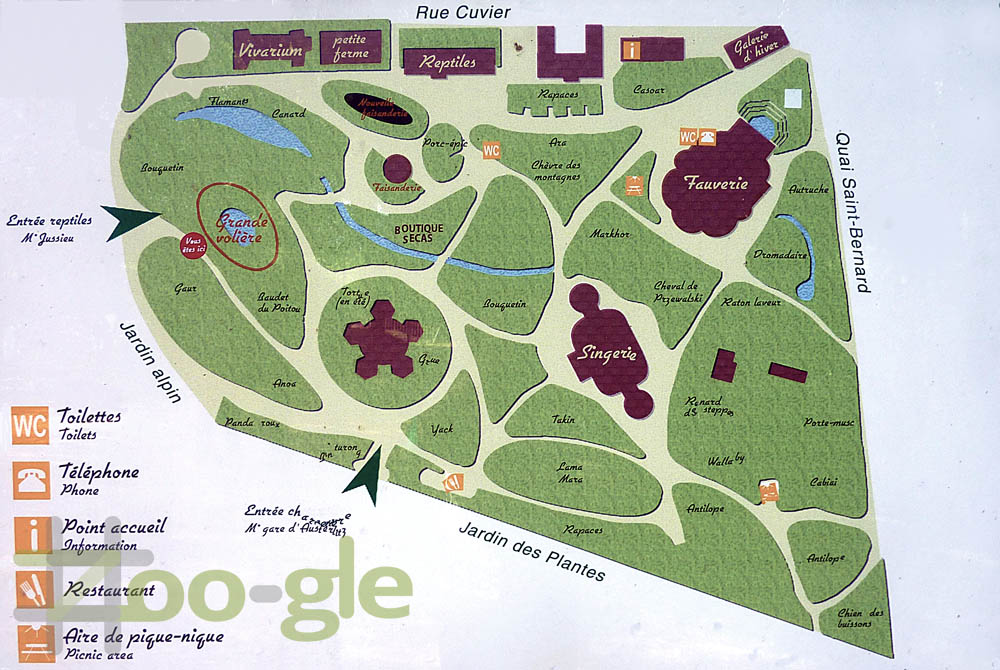 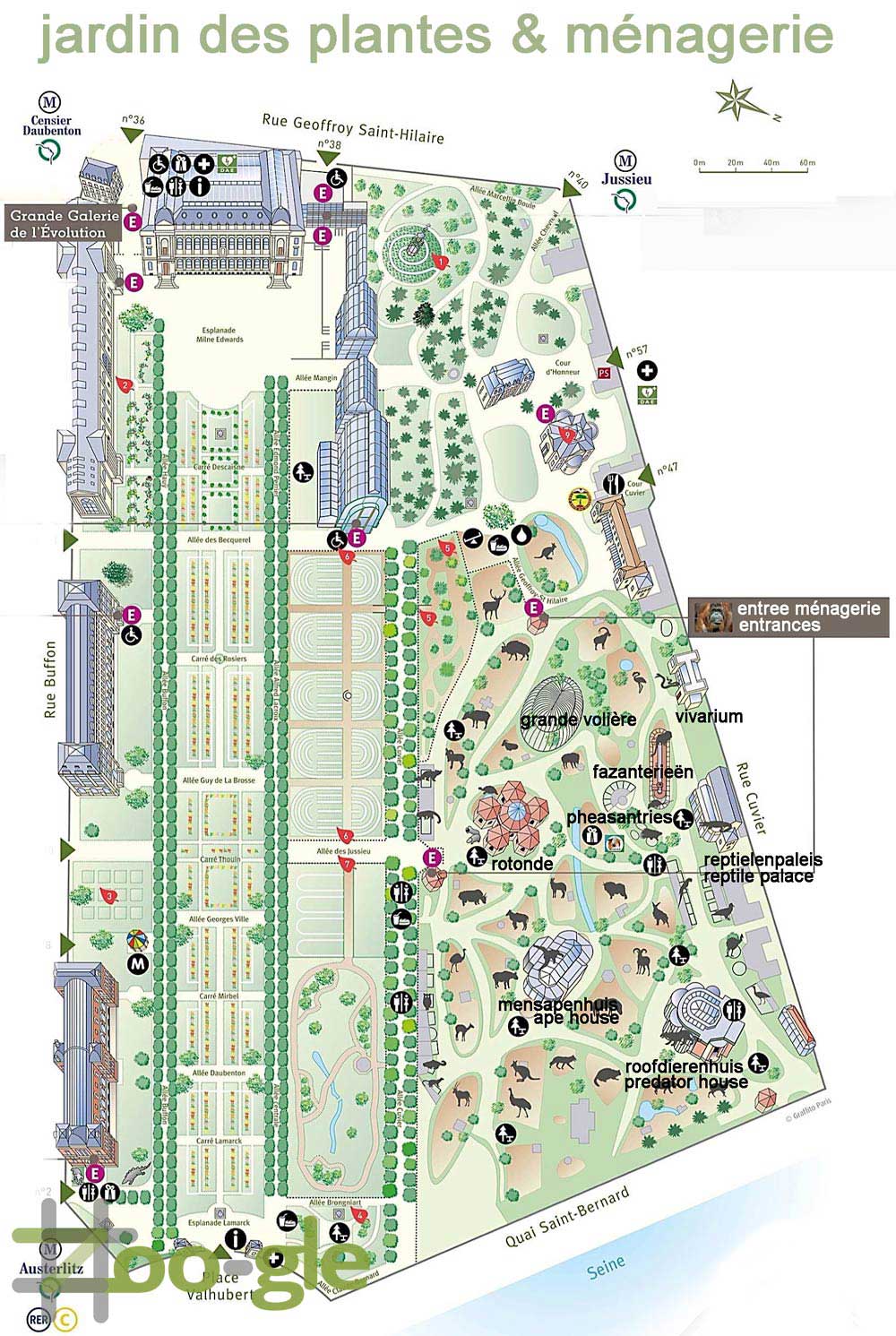 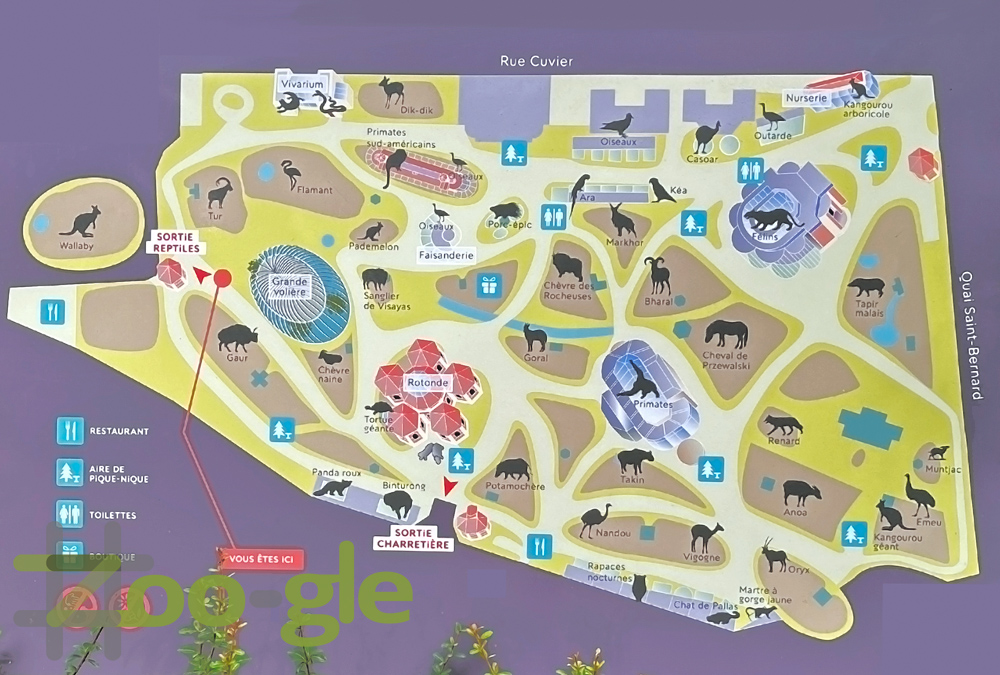