Dublin Zoo, established in 1830 when the Lord Lieutenant allowed the Zoological Society use of a part of Phoenix Park, currently covers over 28 hectares (69 acres) featuring a historic and a new section.

Lakes
Two large lakes, occupying around 15% of the zoo grounds, dominate the view. Plants, trees, and boulders, carefully selected to prevent erosion, provide cover and protection to water animals and primates on the islands.

Historic zoo
Some structures such as the Watchtower Elephant House have been demolished, other buildings like the Monkey House are replaced, and some 19th-century buildings are preserved, refurbished, and can still be seen.

10-year master plan: themed areas
In 1994 a plan presented by the Zoological Society of Ireland and the Office of Public Works generates €19 million for renovation. Since 1996, new life has been injected into the zoo. During 1997, the 32 acres of land surrounding the largest lake have been added, and the site has been restructured little by little into themed areas according to the master plan, developed together with Jones and Jones, Seattle.

The Zoological Gardens Dublin, some 3,5 acres of land and 4 acres of water within Phoenix Park, is opened on September 1, 1831, by the then Royal Zoological Society of Ireland, which has been established the previous year. Like other zoos of this time, Dublin Zoo starts with the intention to show as many different animal species as possible. The first mammals and birds are donated by the London Zoo. By now, Phoenix Park, which is planned by Decimus Burton, architect to London Zoo, is one of the largest walled deer parks in Europe. Over the past decades, the zoo gradually shifted from cages through enclosures toward natural habitats, and to immersing the visitors in the same landscaped surroundings: landscape immersion.

When you enter first thing you see is a lake. Both lakes in this zoo are a refuge for wildfowl. Though we saw far more rain than animals, the facilities and grounds of the historic zoo look well-maintained. Visual hints to nature in South American House, always great eye candy. Meerkats exhibit in Meerkat restaurant. At the City Farm, the public is taught about Irish farming.

The new part of the zoo is as large as the historic zoo and still in the works. Animal names on the information panels are displayed in English, Irish Gaelic and Latin. A row of low white enclosures (gray wolves) seemingly built in 1930s style, could have been the first extension, in our humble opinion. Impressions of elephant footprints and plants on the Kaziranga Forest Trail. The enclosures in the African section are nice looking rectangular boxes with green tops, like helmets. Enclosure entrances borrow heavily from African-style rondavels. 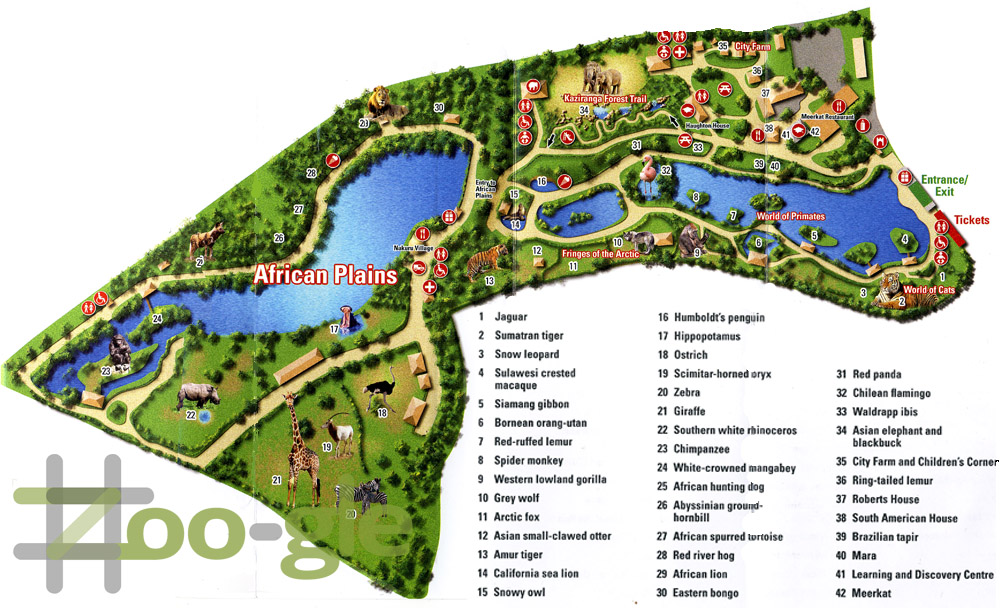 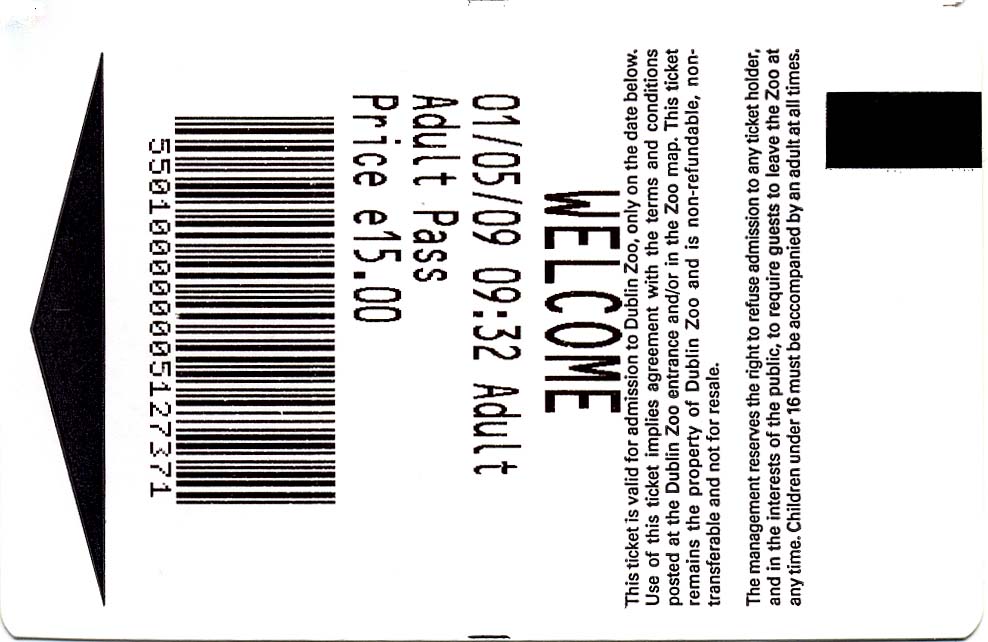 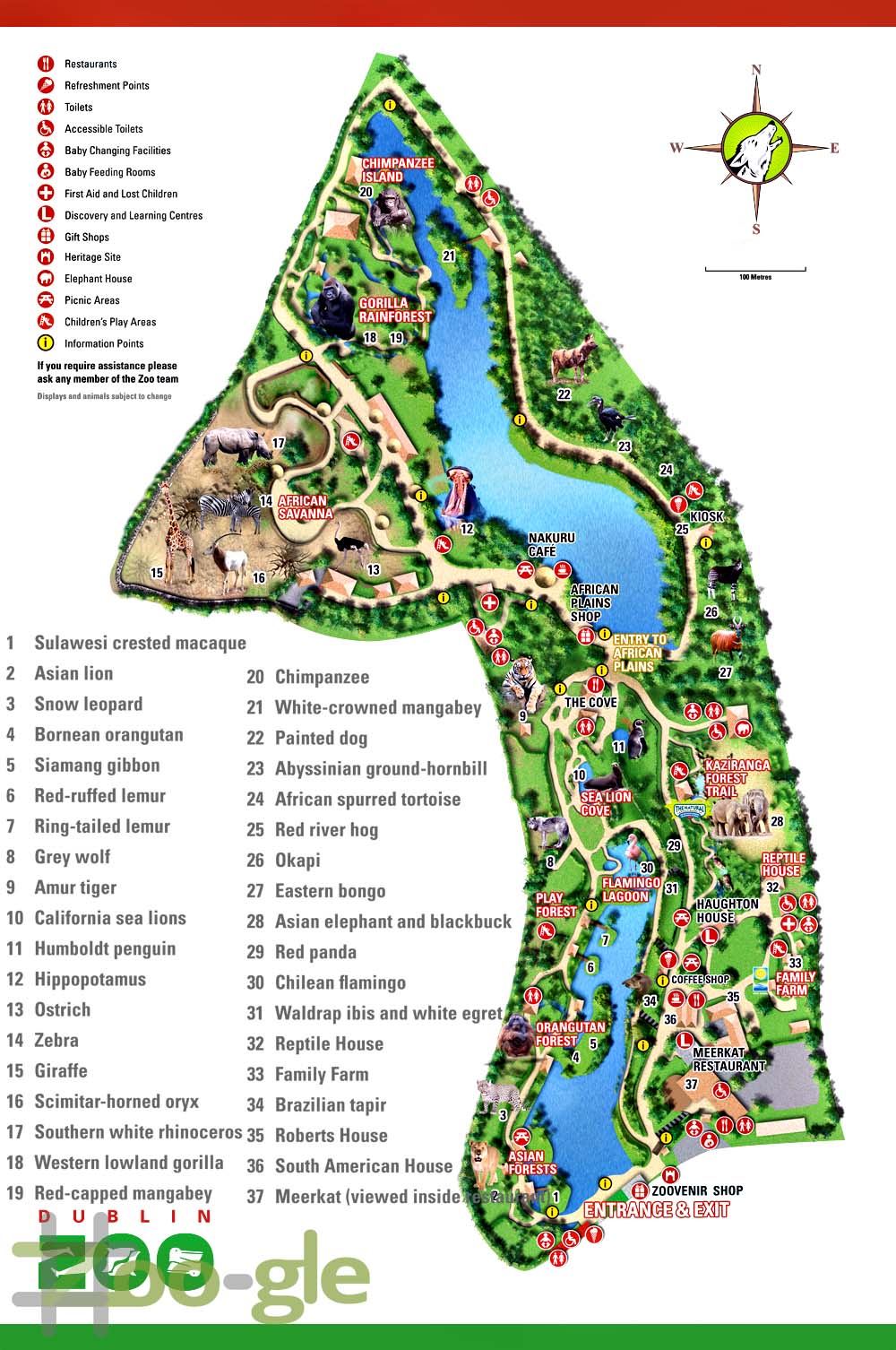