The current layout dates from a substantial renovation 1907-1912 when the city of Budapest has taken over the zoo. On May 20, 1912, zoologist Adolf Lendl who was in charge of the overall management of the reconstruction becomes the new director of the zoo. Partly due to the zoo's strategic position between two railway lines, several buildings are damaged or destroyed during the WWII attacks.

Transylvanian architecture
Varying on the Secession (Hungarian Art Nouveau), architects Kós and Zrumeczky conjure up a Transylvanian village dwelled by animals. They come up with 16 buildings rooted in a medieval architectural style. Wooden farmhouses show visitors all aspects of village life. The style is reminiscent of the Kalotaszeg region.

The village features a lake and rocks and many details that wink to the animal inhabitants. The native Transylvania Kós designed the trash cans with wooden feet.

The number of remodeled, relocated and reconstructed accommodations makes it difficult to find out exactly what you are looking at. the replicas for example, or the Kós and Zrumeczky Monkey House 1912 with the 1936 glass roofed wing.

Owl Castle
Romanesque castle ruins form the boundary between the zoo and the station. A sign at the Owl Castle says that this structure deliberately got a ruin appearance when the zoo opened in 1866. They kept wolves and foxes in the towers. It survived the reconstructions to the extent that it has been recreated where it stands today.

Buffalo house
This replica 2010 stands on the foundations of 1963 and has been given the looks from 1912, modernized though. You see the folk architecture inspired by Szeklerland and medieval Transylvania. It has the geometric shapes used by the Szeklers in former Hungarian, now Romanian Transylvania. The walls have stones at the bottom and wood at the top. It is a composition of buildings glued together the way a house was expanded in the Middle Ages with a stable, utility room, etc. Look how many shingle roofs and yet very handsome and harmonious.

Australia House
In 1912, the building was designed as a Birdhouse.

The defining wooden spire with its four corner pinnacles shows us this is the church of the Transylvanian village.

Great Rock
The hollow structure gets a total surface of 4,700sqm. In three years, 8000m3 of reinforced concrete for frame and walls, supporting beams and steel, and finally, a thick layer of Portland cement are passed through. The central interior space gets a floating dome.

Lion Cave
Due to a lack of money and WWI, director Lendl's heartfelt wish, a zoological museum in the interior, is not yet fulfilled. An exciting space, however, is accessible to visitors through a gate not far from the bears for about 80 years. This was the famous Lion Cave with an iron fence between animal and public, sparse lighting, a lot of smell and sometimes roars.

Water reservoir
The water reservoir in the dome of the rock is reminiscent of the Great Rock in Paris that was built 20 years later but was never used in Budapest.

Renovation
Between 2006 and 2008 both the framework and the crust of the rock were renewed. The footpaths for the public reopened in 2008 after more than half a century. Kós and Zrumeczky's Transylvanian-style dairy once intended to promote milk consumption has been rebuilt. And the belly of the great rock has been transformed into Varázshegy or Magic Mountain with an interactive exhibition about evolution.

Little Rocks
The 22m high Little Rock used to have a cave cinema which during the 1997-98 renovation gave way to an exhibition space and restaurant. On the north side of the small rock is a Hagenbeckian polar panorama featuring a lower positioned sea lion pool in front of the polar bear abode.

Elephant house
The elephant pavilion was built from 1909-1912. The style is Hungarian Secession with Arabic elements. Ceramic tiles from the tile and porcelain factory Zsolnay on the roofs, Moorish horseshoe arches in the walls and a mosaic floor. And what about an 850kg chandelier? Minaret and dome are hints of Ottoman domination. After protests from the Turkish side, the minaret has been demolished in 1915.

When after WWII, the central heating still appears in operation, all the zoo animals are ensconced temporarily at the elephant house. After a long period of abandonment and decay, the idea arises to restore the building to its original condition, in the 1990s. Between 1997 and 1999, the pachyderm house undergoes a renovation, in which the minaret has been returned to its former glory without protest. Elephants, rhinos, and hippos return to the animal house. Today, the elephant house is a protected monument. In 2000 the zoo has been awarded the Europa Nostra Medal for the elephant house, because of

the sensitive and precise restoration of this remarkable example of Hungarian Art Nouveau architecture.

Palm House
Gustave Eiffel, the engineer who designed the Eiffel Tower in Paris, has been active in Budapest, too. Both the Palm House in the zoo and the Budapest West Station was erected by the Eiffel Company. The Palm House is now called Americana Tropicana.

János Xántus House
The winter house for birds that did not survive WWII has been replaced by a socialist realistic building. Later it was refurbished as Xántus House for animals from Southeast Asia.

In 1866, under the leadership of János Xantus the Budapest zoological and botanical garden opens featuring 500 animals and 11 buildings on what is then the edge of the city. From 1909-12 the zoo gets a complete overhaul. The municipality is in control since 1907, director Adolf Lendl monitors the zoological aspects, and professor Kornél Neuschloss the architectural ins and outs. Károly Kós and Dezsö Zrumeczky, two architects having just graduated at Neuschloss create the design. As young as they are, they have already made a name for themselves with a combination of folk architecture with contemporary building techniques and materials. The engineering work is in the hands of Gyula Végh.

WWII left few of the buildings intact, and in the period since then socialist and modernist ideas predominate. The Buffalo House 1963 was an example of this. In the 1990s, it was decided to return to the design of the 1910s, but with a fresh perception of animal husbandry. The large-scale renovation lasts from 1996 to 2008.

In 1995, the zoo is under construction and a walkway ends abruptly with a sign saying "end of the zoo." The zoo is structured along geographical principles and features numerous native as well as exotic animals.

After the Jugendstil entrance by Kornél Neuschloss to the left, we see the big pond opposite the Japanese garden (1965). The Palm House is a listed building and is home to exotic plants, aquarium, terrarium and crocodile house; the basement is containing a marine and freshwater aquarium. In 1985, the Károly Kós bird house (also a listed building) has been modernized and a free-flight aviary has been added. Birds of prey in an adjacent aviary. Pelicans and polar bears near the rocks. We notice a small mammal house, a collection of monkeys including orang utans and otters can be seen above and below the water, predators such as leopards and bears alongside kangaroos. The Africa House opposite the Asia house. Giraffes and an insectarium on the side of the Great Rock near the new ape house.

Artful wrought green iron between columns on a half-height reinforced concrete wall enclosing the zoo. The same animal is depicted mirrored on every two grid parts. Nose to nose. Drizzle, closed doors, a renovation, an abandoned residence and a slippery wet wooden staircase do not really help us get our bearings in the beginning. The Transylvanian Village reads like a children's book, though, it's so fun.

Next to that wooden arch on the border of Australia, a beautiful, empty wooden "Kós en Zrumeczky". The Kós and Zrumeczky Monkey House wears its roof as an oversized hat. Artistic. And look at that painted central heating and the hotwire above the terrarium inside. The free-roaming ring-tailed lemurs provide a free quick drawing course! Lamps shining into the great ape enclosure from the top of the windows, never been seen before.

Giraffe House, the entrance gate and the elephant house are secessionist with an oriental touch, while the Xántus House is reminiscent of the post-war styles.

Giant otters in a timber-framed greenhouse building with glass panels and artificial rocks. When I ask in the Magical Mountain whether that stuffed animal really lived, the employee answers with visible pleasure: only the head, the rest is fantasized. There is one brown bear awake in December. The animal houses close early in winter and we still have to go to the cutest toy store not far from here. What a superb architectural garden. 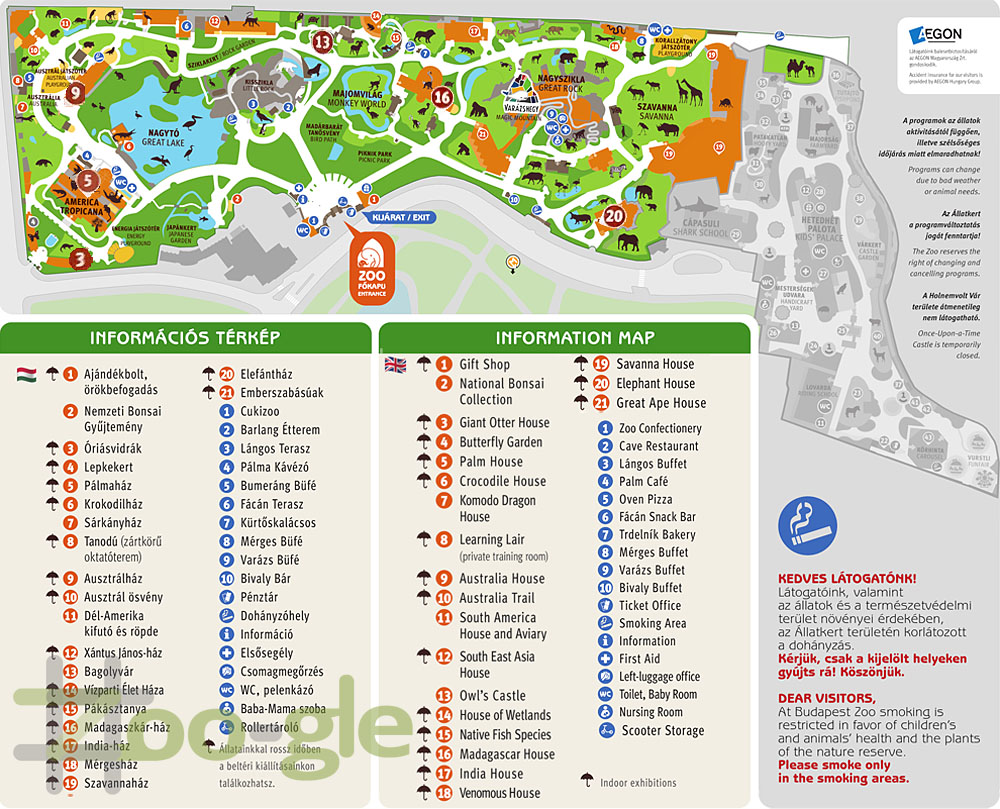