The Antwerp zoo is altogether a living museum, fulfilling the functions of collection, exhibition, research, and education. The 19th century is often seen as the golden age of museums.

The 19th-century landscape park is by Van Cuyck and the oldest structures by house architect Charles Servais, succeeded by Emile Thielens after his death in 1892.

Egyptian temple
The Egyptian Court, Crystal Palace*) served as a model for this Egyptian temple from 1855. A basilica building with a central aisle behind the fore-porch higher than the 2 side aisles followed by a semicircular apse. From 1860 on, the walls of the fore-porch are adorned with Egyptian paintings and hieroglyphics. The orientalist Delgeur supervised the realization of this long-cherished wish of the architect.

The fairly authentic enclosure has undergone several renovation projects and has last been updated according to the master plan in 2015. The temple will be used for educational purposes in the near future. In fact, it has always been primarily an example of exotic architecture.

Moorish temple
In the 19th century, Antwerp zoo housed ostriches in a neo-Moorish building (1885). A glass strip in the flat roof caused light to fall on the cages on either side of the visitor corridor. The facades of the elongated building are clad with lots of floral pattern tiles and have horseshoe arch doors.

The Congo becomes a Belgian colony in 1908, and the first ever export-okapi arrives in 1919. The okapis have been housed in the Moorish Temple since 1965. Three out of four okapis in captivity are said to have Antwerp blood. Building and animals represent the colonial places of their origins: strange, colorful, exotic.

Zoos, a showcase for the colonies

Entrance
Until the early 20th century the entrance was located in the current Carnotstraat, originally. It is still in use as a service entrance. The monumental main entrance at the Astrid Square dates from 1903 when the train station against the zoo is leaning was built.

The relocation of the main entrance marks the encirclement of the zoo by the city. A loving headlock. Modern architects accentuated the enclosure with a rock wall and turned the zoo into an urban island.

Rhinoceros House
From 1893, the zoo buys houses at Ommeganckstraat that are not all immediately demolished. Around the turn of the century, the house architect designs an L-shaped building between the buildings in the Ommeganckstraat. He uses striking colours, all kinds of bricks, and a slated saddle roof structure. The gable and a "lace edge" under the eaves can be called eclectic. Sympathetic small columns between the windows.

In the 21st century, zoo legislation enforces larger paddocks which became possible by purchasing more plots. The corner of the zoo where the Rhino House stands has been dealt with as a whole. The historic raptor aviary is being rebuilt near the ape enclosure. More walking space for giraffes and a cleverly positioned restaurant of which you only see one façade at a time. A fully glazed wall offers views from a height of 5m onto the buffalo and bird aviary into which the rhino house is integrated (as a birdhouse) alongside a new "rocky" buffalo stable. The savanna is characterized by nets, strung high on pylons.

Panorama Park 1908
At the beginning of the 20th century, the zoo got a fenceless artificial park to hide the new station hall from view. Due to the size of the station, the park was built into the height which was a perfect match with the then-popular Hamburg Hagenbeck-style zoo panorama. The name Panorama Park says it all.

Aquarium and reptile building
The aquarium (1911) is a monolith. Floorplates, joists, columns, and ceilings are one piece of reinforced concrete. The result is a gallery with a footprint of 63 by 16 meters. The display windows on either side of the main gallery are provided with ornamental arches and marble. From the outside, the facade looks like a rock wall.

A reef environment has been added to the aquarium area as part of a major overhaul in 2011. To get the arched window of 4 by 8 meters in, a hole was cut through the outer wall of the Ploegstraat.

The Greek temple containing the reptile building (1911) is stacked on the aquarium. A temple on a rock.

Birdhouse
The 1948 building was erected behind the original fin de siècle facade of 1893. You can see art nouveau in the colourful glass windows. Bird enclosures are always one thing. Locking up birds with their wings to fly in a cage, which must look very natural for the pleasure of visitors, which architect makes a difference? In Antwerp, they know that day birds do not fly into the dark. They are exhibited in shop windows, brightly lit and without glass panels or bars. "Nothing separates the birds in these cages from the public" was written in coloured letters on the wall for some time. Later, coloured lighting and letters were removed.

In 1945, the zoo has patented the idea of keeping birds using a light/dark barrier.

And then it is 2020 and the living birds make way for curiosities. Due to animal welfare standards as read on a sign.

Ape building
The location of the ape house (1958 and renewed in 1989) was chosen to take advantage of the sunny outdoor space to create terraces. Night quarters were made above the staff corridor between the outdoor terraces and the indoor enclosures. By giving particular attention to indoor and outdoor, climate control, and climbing equipment the building is tailored to the biological needs of the animals in a clean way referred to as bathroom style. Inside, double glazing (a first!) was used to protect the apes from visitor's nuisance behaviour as well as from exposure to human airborne diseases. On the outside, a Hagenbeck-style moat separated apes from visitors.

The ape house is from the same year as the Expo 58, the time of the first computers and futuristic design. The Atomium is also a relic of that Expo.

Landscape immersion: the same play equipment for children and monkeys

Great apes valley
Halfway through 2017, the great apes' valley of 2000 m2 was finished. A 67m long monkey cave below the savanna restaurant connects indoor and outdoor enclosures. The visitor's path runs between chimpanzees and gorillas and arrives at the buffalo savanna via a children's cave. Along the route white walls with viewing windows. Natural rocks from the Ardennes. Just like the buffalo savanna, the ape valley is covered with nets on tent poles (4 pylons) of 23m. From a distance, the 3000 m2 of nets looks like a patchwork tent roof made of hexagonal pieces. A honeycomb as someone said. Around ten contractors were involved in the realization.

Architect: The enclosure was conceived by 12 zookeepers and 2 gardeners who made the model with heart and soul, and sticks, and pieces of cardboard.

Master plan RSZ 2020
Demolition of 31 purchased houses makes way for a new zoo area of 4 acres. In the 2008 master plan, the ticket counter slides a bit into the zoo creating space for a front garden in the city centre. In the front garden - later called the entrance square or welcome square - the non-visitor gets a taste of the zoo. Peepholes in a wall along the Ommeganckstraat allow passers-by a glimpse of the zoo scenery. Some buildings will be visible or accessible from the street. The Bovine House gets a public function as a zoo academy. The boundary between public life and zoo life is blurred and a paradise is created in which people, apes, and monkeys are equated with each other.

There is a story that Jan Frans Loos in 1940, before being appointed mayor of Antwerp, visits Amsterdam where he is impressed by the zoo. Along with wealthy Antwerp citizens, he founds the pre-zoological society in 1843, later renamed with the more expansive name of Royal Zoological Society (RZS) of Antwerp, and buys the first plot of land, actually a botanical garden with some farm animals and a collection of taxidermied animals owned by the first director, Jacques Kets.

The 11 hectare Antwerpen zoo shows significant similarity to that other typical urban zoo, Artis in Amsterdam.

The Antwerp zoo has been established in 1843 just outside the city walls. The entrance fee equaled a working man’s daily wage, but only the rich could visit the zoo. In 1847, the zoo is expanded from 1,59 to 7,59 hectares. The first exotic animal would have arrived in 1847 too, a chimpanzee. Probably the first chimpanzee to dine with a director of a zoo.

On January 14, 1984, the entire zoo has been declared a historical monument. Of the original buildings, the Egyptian temple, the okapi enclosure and the raptor bird cage are still in use.

In the Ommeganckstraat, a blind wall was planned or, on the contrary, peepholes to get up an appetite for a visit to the zoo. The neighbourhood had its own opinion. Now, I see blind windows in the wall and further on a somewhat vague look behind the scenes. Just between you and me, I can appreciate colliding solutions. The brick rear wall of the Rhino House is in the same street. Often photographed this eclectic(!) building, completely sandwiched between the zoo and the city. In the end, it appears to be standing on its toes next to a buffalo house while pylons continue endlessly into the sky holding up a lot of nets. Nicely refurbished. The row of trees in front of the kangaroo house looks super clean, hides the long lines, though. The zoo focuses on historical awareness, the cleaning tips of Marie Kondo and visitor experience. Just like in Rotterdam removal of visual pollution that develops over time already helps a lot. 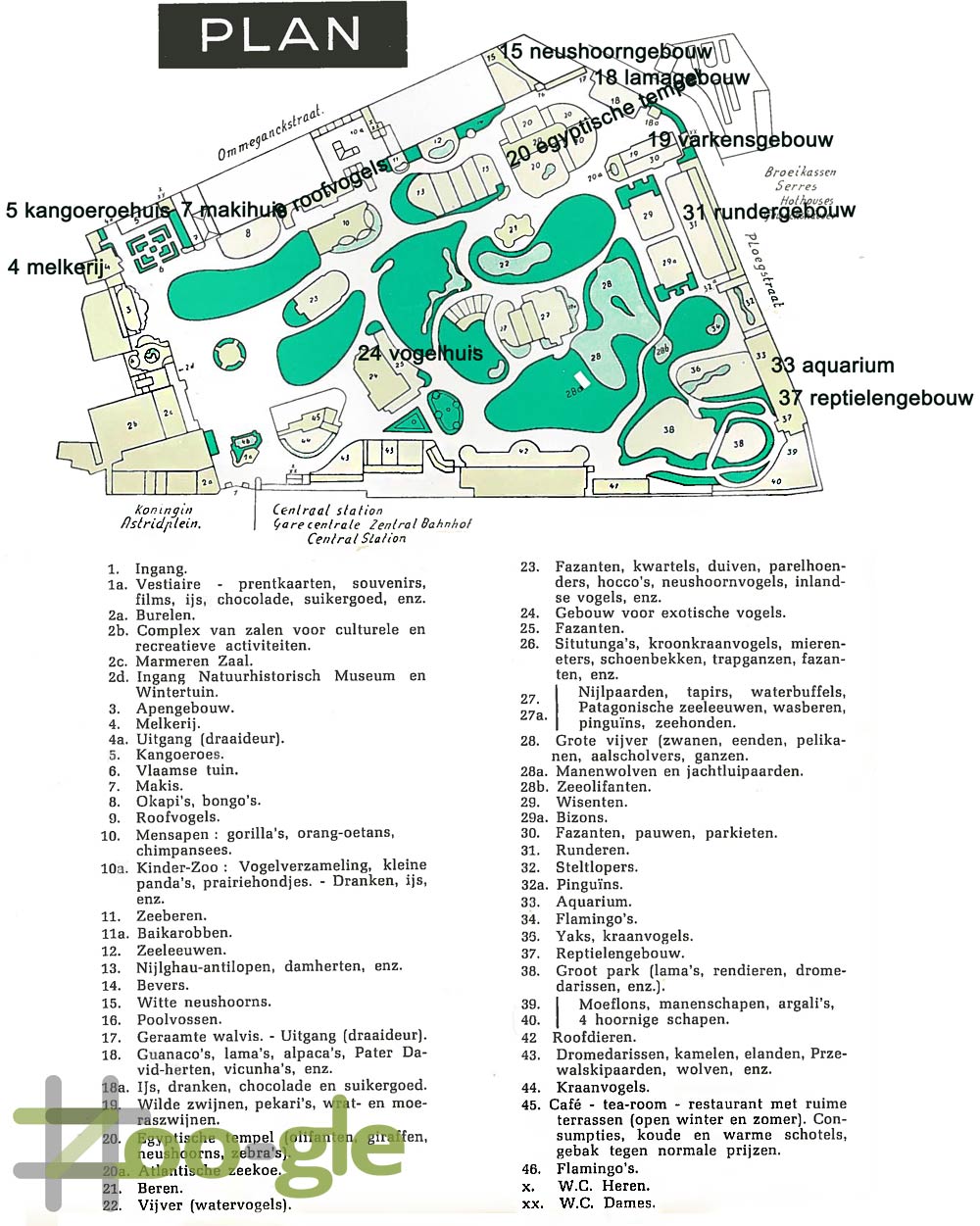 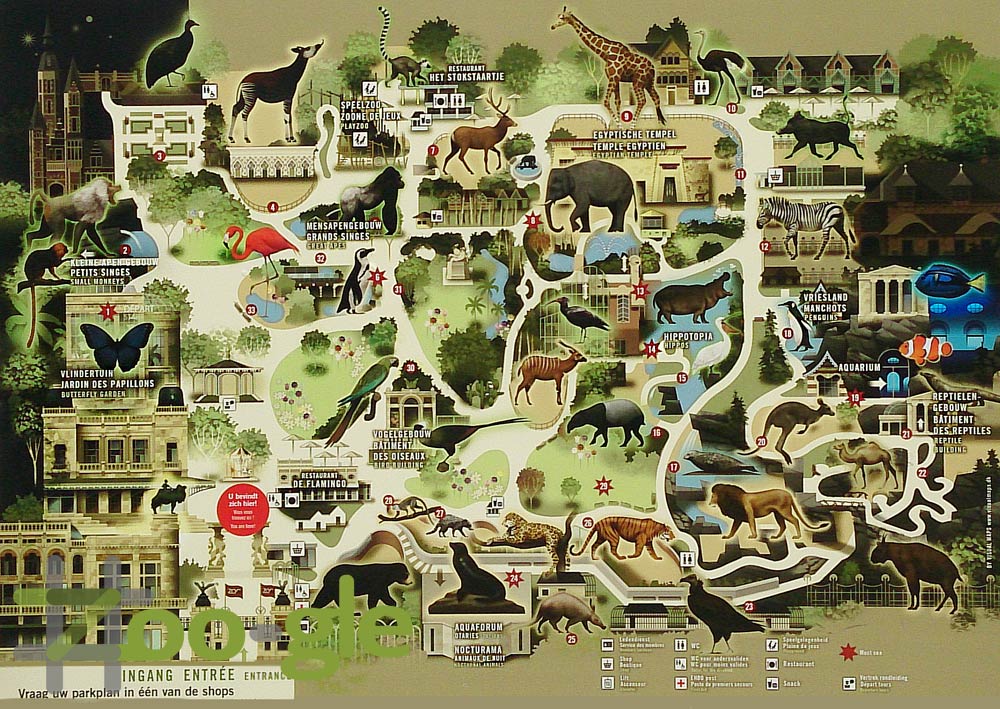 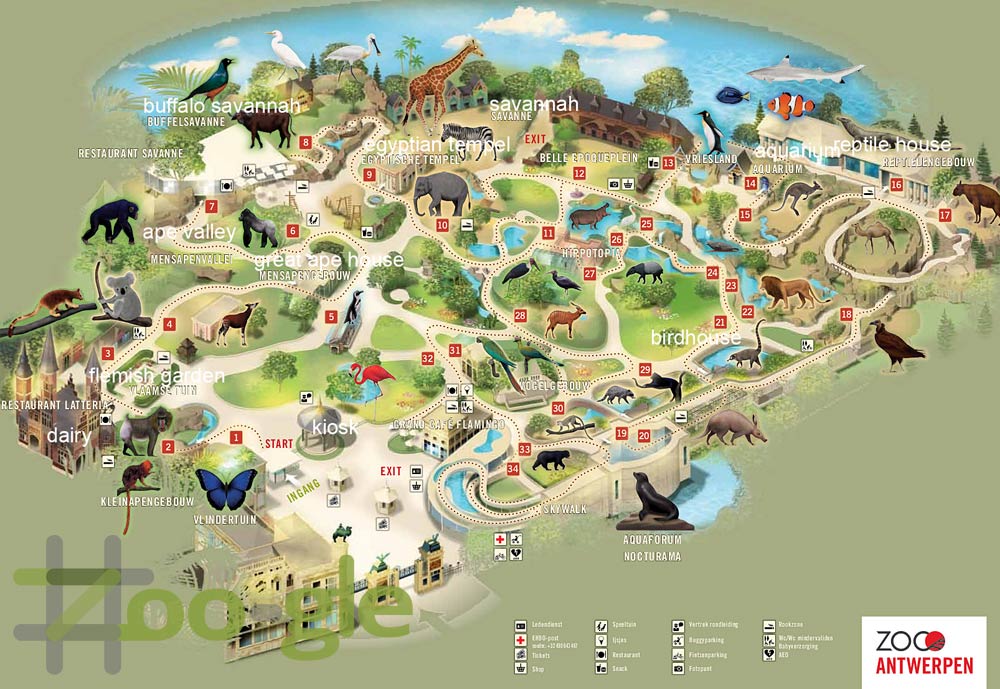 The image bank of the zoo