Surabaya got its name from the Sura (shark) and the Baya (crocodile) fighting in the golden Kalimas river. The city is located on the site of where the conflict took place. The Suroboyo Monument in front of the zoo is a magnet for selfie-makers.

Context
As easily western zoos spend €50 million for a tropical rainforest exhibit designed by architects, just as difficult it is for Third World zoos to get access to funding, basic natural resources and knowledge. In this context, the Surabaya zoo looks promising in October 2017, thanks to some outside intervention.

Visitor journey
Tailored to the Indonesian visitor's liking bonbin Surabaya features a kind of selfie-journey starting at the Suroboyo Monument in front of the zoo, followed by Taman (Garden) Selfie accessorized with a fake rock and a waterfall behind the entrance. Across from the selfie garden, a fake-penguin exhibit teaches the Asian visitors something about these strangers. The infrastructure has not greatly changed but the walking paths are paved, and zoo map, signage, and information panels are in place. Of course, the tropical green and flowers don't miss their impact. Sometimes you can hear the colours.

Renovation
In around 2010, the adult and young Komodo dragons are housed separately in new dwellings. In 2012, the Aquarium appears to be renovated by architect Tata Matra. The roof (outside) and the ceiling (inside) are decorated with blue waves. Inside more fish decoration, a cylinder tank, and rows of aquariums along the walls. At the back, there is a path along the border wall with a blue mural. The wall along the elephants has got a green mural. The reptile enclosures are a combination of a shop window and re-created habitats in the way most of the western world zoos do.

Approximately in 2013, new outdoor dwellings for the big cats have been launched. A stone wall at the rear is shielding one side of the outdoor lion enclosure which is surrounded by water on three sides. As demonstrated on the Javan sun bear and orangutan islands external animal welfare programmes aimed at enclosure and enrichment guidance are visible. Artificial rocks, hammocks, and an orangutan under a burlap sack.

March 2012, 20kg of plastic were found in the stomach of Surabaya's last living giraffe. October 2017, several giraffes are parading in a revamped paddock with parasols and trees to shade from the sun and a small masjid shaped structure. In addition a photo and selfie-spot for the visitors outside the fence.

The Dutch journalist H.F. Kommer who was looking for a place to practise his hobby of collecting wild animals is the founder of Kebun Binatang Surabaya. He knows how to interest various donors in his cause and the Soerabaiasche Planten-en Dierentuin (Surabaya Botanical and Zoological Garden) starts in Kaliondo, after the Decree of the Governor-General of the Dutch East Indies on 31 August 1916, number 40. On 28 September 1917, the zoo moves to Jalan Groedo and in 1920 to the 3 ha site of the Oost-Java Stoomtram Maatschappij (OJS) (East-Java Steam Tram Company).

April 1918, the zoo opens to the public against payment of an entrance fee. On 11 May 1923, the member's meeting decides in Restaurant Simpang to set up a new Zoo Society and to replace co-founder and chairman J.P. Mooyman by W.A. Hompes. In 1927, zoo expansion with 3 ha portion of land from OJS is made possible through support by local authorities and a Parliamentary decree. In 1939-40, an additional expansion of 8 ha is implemented.

During the last decades, Surabaya Zoo has been dubbed the “zoo of death” because of reported overcrowding, animal trade and animals dying from disease and malnutrition. Online petitions draw international attention. In 2010, the government deploys a temporary team headed up by the experienced zookeeper Tony Sumampau.

At around 6 AM, we have coffee opposite the zoo after disembarking from the boat from Bali. We peer inside and a zookeeper opens the door. He lets us enter the pelican aviary as well as the komodo dragon enclosure... Crocodile and turtle are brough to the surface for us, the elephant is saddled and we are offered nasi goreng.

For the rest, this zoo seems to be suffering from constant bad publicity.

The Surabaya Zoo was not on my calendar until I read that an online petition was submitted calling on the President of Indonesia to close the zoo. So off I went trying to figure out what had changed in 20 years. And I spotted more than 7 differences.

Compared to 1996, the enclosures where we strolled among the Komodo dragons are replaced by two walled paddocks, our ride on an elephant seems institutionalized and the basins where the zookeeper showed us a crocodile and a turtle seemingly not changed though everything around them looks a bit tidier. The walking paths look better, signs of recovery are there! My colleague concludes that this is the power of social media. That is not bad going for a zoo in a sub-developed country. 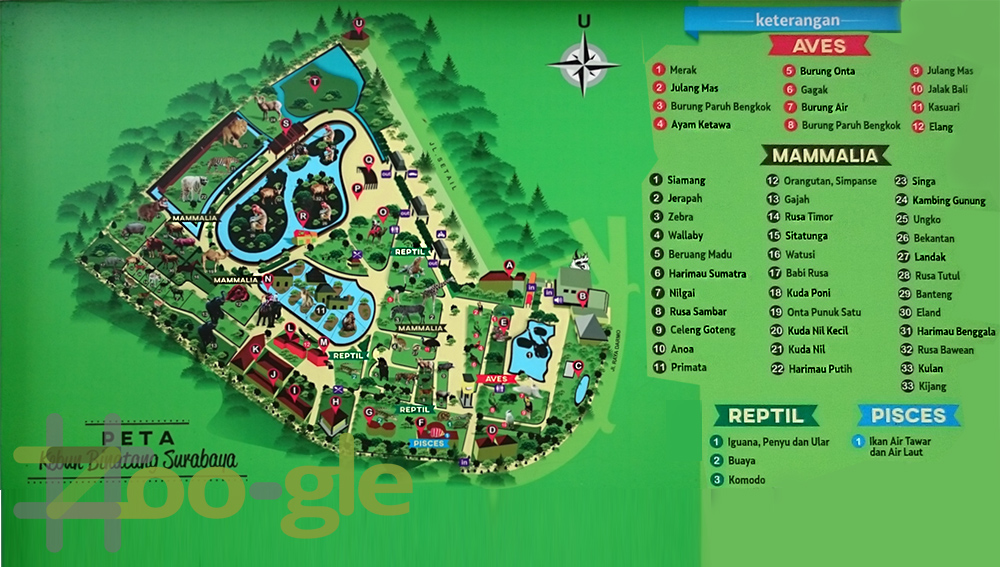 JakartaGlobe, Surabaya Zoo to Be Finally Handed Over to City