Undoubtedly influenced by the European elite Maharaja Sri Chamarajendra Wodeyar has set up the Mysore zoo in 1892.

The German horticulturist, as well as a landscape architect Krumbeigal, has designed the zoo and even the original animal enclosures do not look too cramped. The collection of wild animals has to impress the maharaja's important guests. Several years later the garden has scaled up from 10 to 45 acres, and the Australian Huge became the superintendent.

The old zoo
The old zoo with bird cages, a rapture house, and a fountain kitsch-style like the maharaja's palace can be easily found. The old zoo is designed symmetrically. From the octagonal pavilion, the walls between the cassowary, the ostriches, and the gaurs radiate like spokes from the hub of a wheel. A baroque menagerie one may almost say.

The largest part of the zoo with extremely spacious animal enclosures has been added however in the 1960s. Zoo governor Marigowda manages to enlarge the area from 45 to 250 acres (including the Karanji Lake). A 3,5 km zoo trail leads along the animals.

Only the best is good enough for the summer palace zoo named Sri Chamarajendra Zoological Gardens in 1909. In early 20th century, the zoo opens to the public. Brochures and postcards underline the maharaja's educative intentions.

The first-half century
The maharajas zoo animal collection used to be outstanding. In Europe and Africa, he selects giraffes, chimpanzees and bears in exchange for wild animals from India. There is a longlasting connection between German animal traders like Ruhe and the Mysore zoo. The zoo specializes in wild animal orphanage, exotic animal breeding and in raising young elephants, for other zoos.

It is in 1948, the year of Independence, that the zoo and the zoo staff is handed over to the Parks and Gardens Department. In 1972 the Forest Department takes the zoo's administration and in 1980 the zoo is governed by the Zoo Authority of Karnataka.

Service buildings and a bust of the founder are located to the left of the entrance. It is crowded with families.

Mysore zoo is still offering the Classic Collection. Many elephants, of course, African and Asian ones accompanied by their caretakers. The male African elephant has four chained legs. We count nine tigers (one white), three lions, a cheetah and a panther. Furthermore giraffes, white and black rhinoceroses, hippopotamuses, tapirs, many many deer, nilgais and birds. The zoo proudly presents the *only* gorilla in India. This one and only gorilla in India is housed in a grotto-enclosure. The modern monkey area of the zoo also houses chimpanzees, lion-tailed macaques and baboons.

The zoo shop looks rundown, but several drink counters are provided as well as one canteen.

The Snake House ends up on a walking bridge where visitors can see crocodiles and Gange's gharials beneath. The trail continues in a walkthrough aviary with white and black swans. In the Nocturnal House, nothing moves... 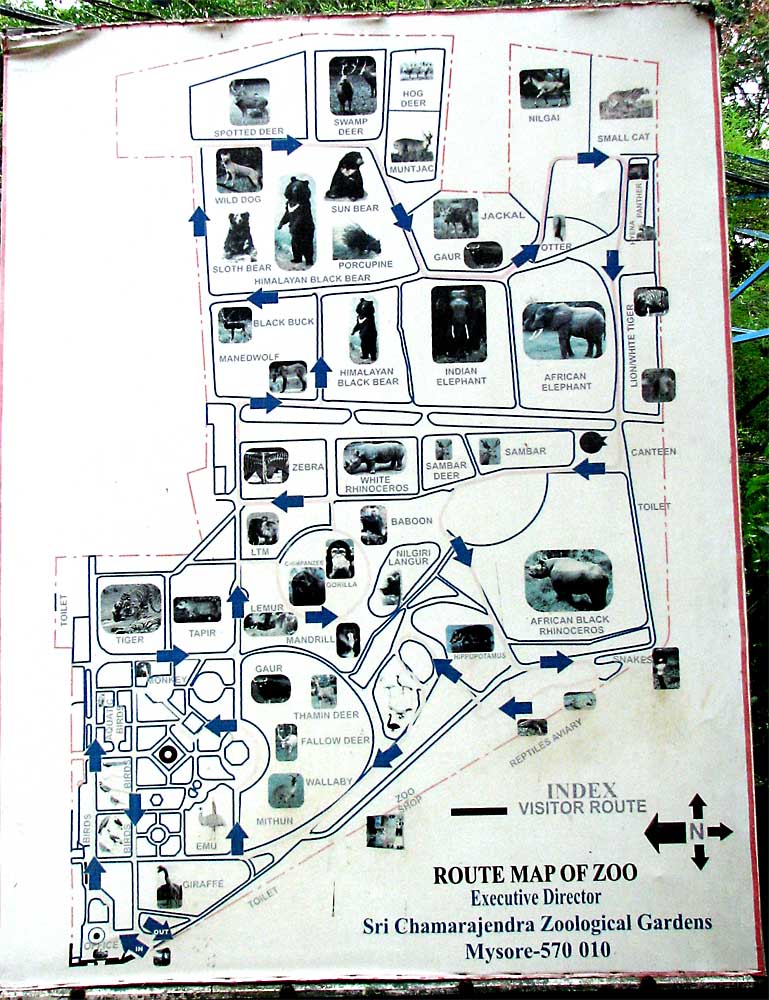