The sprawling zoo, the San Francisco zoological gardens, has the classical features of zoos of the early part of the twentieth century. A kind of American cousin to the Rotterdam zoo Blijdorp, and obviously turning the tide towards conservation.

When director and zoologist Heller, Fleishhacker and architect Lewis P. Hobart design most of the zoo their goal is straightforward:

Furthermore, the building material shall be reinforced concrete and the visitor shall have an unobstructed view of the animals. Barless and moated exhibits. In 1940, 10 WPA exhibits are completed: the pachyderm- and lion houses, a large aviary, a sea lion pool, a row of five bear grottos, a lake for waterfowl, beaver and otter exhibits, a restaurant and a plaza with a fountain.

Lion House, bear grottos, the elephant house, fountain and sea lion pool are still standing. As in other concrete zoos, vegetation is used from the moment zoos emphasize conservation and animal welfare. In the ongoing evolution, historical particularities are explicitly preserved. This includes e.g. the Dentzel Carousel (1921), Little Puffer steam train (1904) and The Mother's Building, a 1925 Italian Renaissance–style building to a design by Kelham, which has been erected in honor of Fleishhacker's mother. The Mother's building has had a variety of different functions but eventually closed as a souvenir shop in 2002.

The Bear Flag
In the year 1889, journalist Allen Kelly catches the formally last wild grizzly bear of California as ordered by his boss, newspaper publisher William Randolph Hearst. Hearst puts Monarch on display at the Woodward Gardens, where he opens November 10 to a crowd of more than 20,000. Monarch moves to the Golden Gate Park where he lives until his death in 1911. He never set paw in the zoo's current location. In 1953, the grizzly bear on the California state flag is modeled after Monarch.

Fleishhacker Zoo 1929
The zoo is built by the Works Progress Administration (WPA) and opens in July 1935, named after its founder Herbert Fleishhacker. The name The San Francisco Zoological Gardens is adopted in 1941.

After Bistany has passed away, his successor Heller, Fleishhacker and architect Lewis P. Hobart team up to design most of the zoo. This WPA funded project costs $3,5 million. In 1938, Hearst donates five polar bears and three giraffes. The director of the Portland and the William Hearst zoo becomes the San Francisco zoo director in 1941.

Second half 20th century
In 1964, the great ape rock is completed. In 1973, the zoo is accredited by the American Association of Zoological Parks and Aquariums (AAZPA). In 1979, the zoo opens the Insect Zoo and Wolf Woods.

In 1984, the zoo is allowed to exhibit giant pandas from China. The giant pandas named Ying Zin and Yun Yun are a mass visitor attraction. A year later the zoo opens Primate Discovery Center. Discovery Hall, developed with $1 million from the William Randolph Hearst Foundation, is the first interactive, educational part of the zoo. Also, Koala Crossing opens in 1985.

The mild climate, the grays of the concrete and the greens of the dense vegetation give this zoo its own look and feel. Quite a lot of empty enclosures, one with a note on the fence saying that the elephant seals have been rehabilitated and returned to the Pacific Ocean. Quite a few variations on art for over the sofa: badly painted versions of the original habitat as a backdrop. Little Puffer is a steam train to tour visitors from one stop to the next.

Penguin pool
In 1984, the concrete penguin pool of 131ft by 40ft from the 1930s has been landscaped with 35 tons of black lava rocks to make it look like the natural habitat Punta Tomba. In 2003, there is a remarkable news story, which reports that six new Magellanic penguins jump into the pool trying to re-create their migration and the 46 resident penguins join in. Even after draining the basin the penguins keep on circling until the breeding season.

Feline Conservation Center (1994)
This 21528 sqft center is located in a secluded area and literally feels deserted. We have seen only one fishing cat.

Lipman Family Lemur Forest (2002)
Primates of Madagascar and lemurs can be seen from an elevated boardwalk. The animals are allowed to move from the outdoor exhibit to the indoor enclosures covered with dense vegetation and vice versa.

Africa exhibit 2004
A partially covered path ends up in the middle of the 1,2ha savannah. There the visitor can watch giraffes and other African animals, immersed in Africa and in between African wildlife. Occasionally, visitors see how the animals are cared for, a considered choice to get this from behind the scenes to the foreground. African Aviary displays dik-diks and African birds. A path is linking to Gorilla World/Preserve. 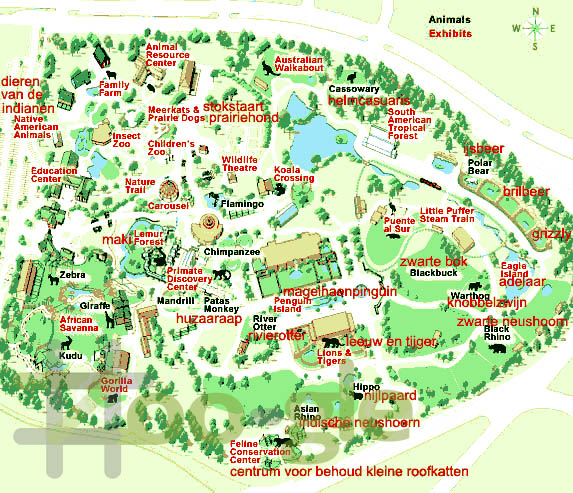 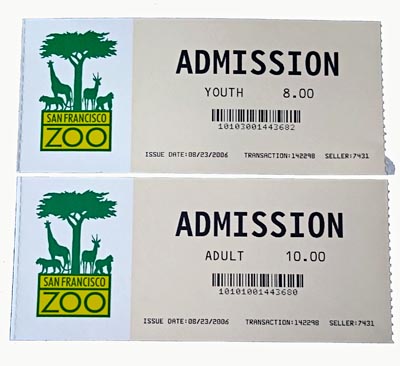 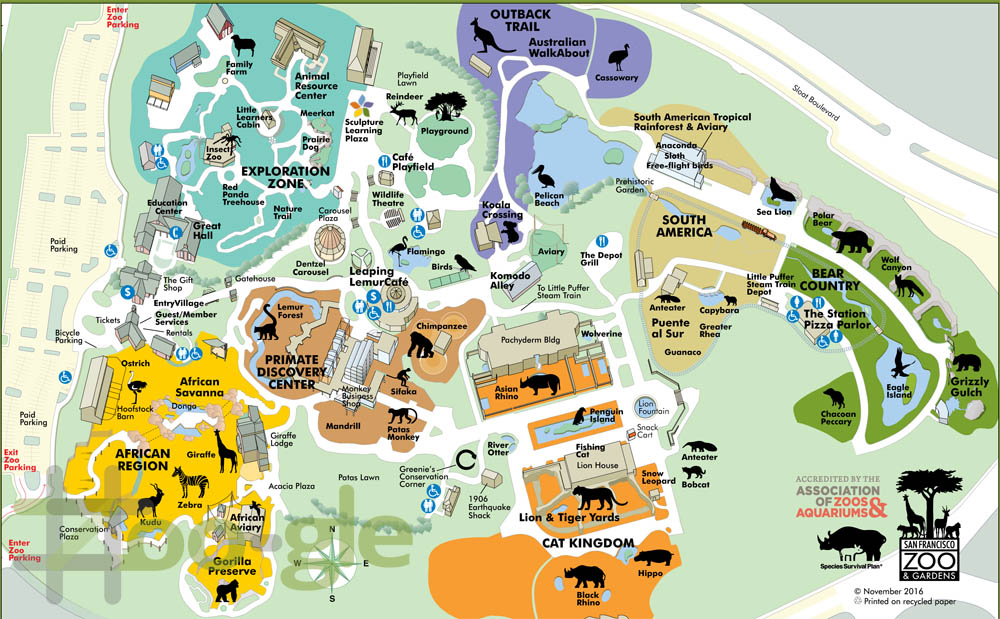